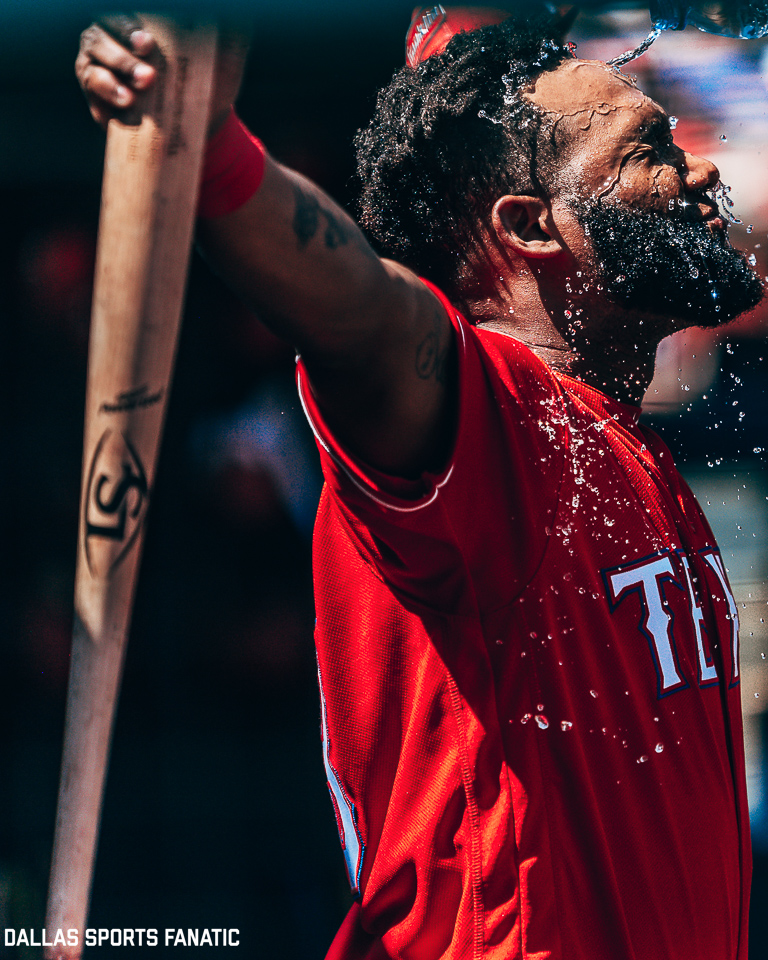 The Rangers are closing an “interesting” month of April, along with three games in March mixed. In a small sample size, there were ups, downs, questions answered and questions that remain. If there’s one thing to summarize this team in the first four weeks, it’s their persistence. There are a few factors that stand out.

Whether the fans like it or not, this new approach the Rangers adapted is providing results rapidly. Players look more comfortable at the plate, and the team results show improvement from 2018. The Rangers are seeing the second highest pitches per plate appearance this season, at 4.12, lowering their aggressiveness. This tendency gives the hitters more opportunity to wait for their pitch to barrel up.

Of whacked balls by this club, the Rangers make hard contact at a 43.7 percent clip, the highest in the Majors, and the second lowest when it concerns to soft contact (14.3 percent). On the downside, called third strikes will happen and will continue to occur, but the key is being smarter at swinging the bat. This tendency also proves in pressurized situations. The Rangers are seventh best in MLB with a .281 batting average with runners in scoring position. In 2018, the Rangers hit .243 with runners in scoring position, seventh worst in MLB.

A significant pinpoint of this teams’ success in the early going is their resiliency. When I say resiliency I mean regardless of if they are trailing or leading in the ballgame, the ball club fights. Eight of the twelve Rangers wins this season come in games where the opposition scored first. Woodward emphasizes on pressure and difference between good and mediocre teams. “We’re not going to feel pressure,” Woodard stated. “We’re going to give pressure. Mediocre teams feel the pressure; great teams put the pressure on.”

After the Rangers 11-10 win last Sunday against the Astros, I asked Joey Gallo about this team’s supple approach (in reference to being up nine against Houston). “Against teams like [the Astros] you got to put them away and keep scoring.” Joey said. “But it’s been great on everyone, whether you’re up 10-1, down 10-1 everyone is taking the at-bats seriously, it’s good to see that.”

Yes, we all knew the starting pitching would be a weak point in 2019 for the Rangers, and it has showed up, big time. After a rocky start for Shelby Miller, the improvement showed in his last two starts. Miller went at least five innings in each start, and allowed three runs last Sunday against Houston and four runs versus the Mariners on Friday. However, the Rangers’ starting staff comes into Saturday with an ERA of 6.52, second worst in MLB to the White Sox. The staff also has pitched the second-fewest innings with 116 as a staff. Only the Rays have pitched fewer, and Tampa Bay will use an opener on occasion which triggers a low inning count for a starter.

Mike Minor has flourished as the ace of the staff. Minor is responsible for the two instances where a Rangers starter has gone six or more innings. This includes a complete game shutout on April 16th against the Angels, the first in his career.  The Rangers goal coming into the season was to ride the original five for as long as they could and then bring in the minor league cavalry later in the year. Unfortunately, the plan began a little earlier than expected with the Taylor Hearn start on Thursday.

The Rangers played three of their first four Sunday games at home, and my gracious were those games “entertaining” to say the least. It started with an 11-10 comeback against the Cubbies on March 31st. The victory included a Delino DeShields grand slam and a walk-off wild pitch by former Ranger Pedro Strop. Next, the Rangers rallied down 7-2 to knock off the Athletics 8-7 on April 14th. It was Danny Santana’s coming out party as a Ranger, in his first Texas AB.

Finally, on April 21st, the Rangers held off an Astros 10-1 comeback by beating their in-state rivals 11-10. Joey Gallo picked up his first sacrifice fly in 1337 total plate appearances to which in typical Joey fashion, he shrugged it off like it’s no big deal. Elvis Andrus confirmed with me that Gallo indeed got the baseball.

I inquired to Joey on what the deal is with crazy Sunday home games. “I don’t know. It’s weird usually the wind is howling and I think that has a reason and feel like the ball carries in the daytime.” Joey said especially after his “Easter miracle” opposite field single (his words, not mine). Gallo added, “But usually it’s tough waking up early and kind of a different schedule.” I got good news for you folks. If this trend keeps up, you got eleven more Sunday home games to look forward to. Plus the Rangers are 3-0 in those three games mentioned.

Just how we drew it up!

A difference between this club and last year’s team is that the 2019 Rangers have a more polished identity. Last season, the club on the field seemed less unified, and it showed in the performance. It’s a great step, despite some rough bumps in the road. Expect the Rangers to go deep into their farm to evaluate potential starting pitching or even a possibility of a split-start. There’s a lot to be happy about moving forward in this organization, considering the rebuilding circumstances. It feels like the entire clubhouse interjects the vibe of the new Taylor Swift song, “ME!”. Trust me, that’s a positive.