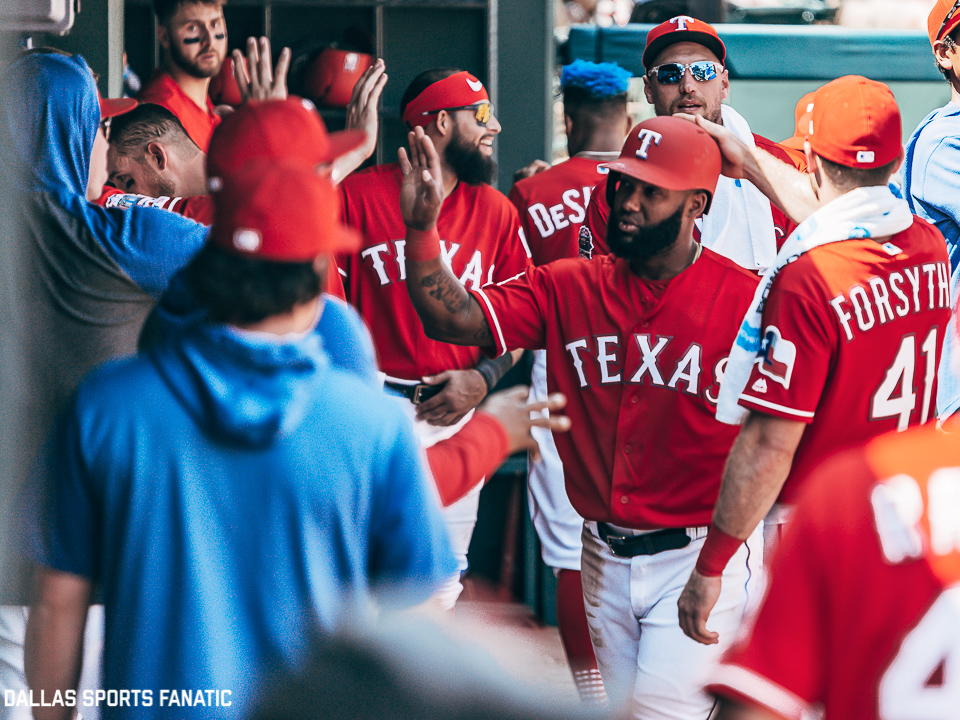 Texas Rangers Quarter-Pole Roundtable: What exactly do we have here?

Texas Rangers Quarter-Pole Roundtable: What exactly do we have here?

After finishing a nine-game roadtrip that took them through Pittsburgh, a dreadful weekend in Houston and concluded in Kansas City, the Texas Rangers will come home Friday to begin a six-game homestand with a record of 19-22.  At the 41 game mark, manager Chris Woodward and his squad are about a quarter of the way through the regular season.  That’s three games better than the 16-25 mark they had through this many games in 2018, but it sure has been an up-and-down ride for the boys so far this spring.

Considering the expectations surrounding the squad before the season, it’s easy to be content with the team hovering around the .500 mark this far into the season.  However, when you factor in the streakiness of the team’s performance plus the consistently bad starting pitching behind Mike Minor and most of Lance Lynn’s starts, it’s hard not to cringe when thinking about how easily this team could already be ten games below .500.

There have been countless juicy storylines so far this season like the emergence of Joey Gallo, the deflating fall of Rougned Odor, the demotion of Delino DeShields and the exciting call-up for Willie Calhoun that has been so impressive through two games.  Some of our Dallas Sports Fanatic staff got together to discuss what has been going on with the team so far.

What has been your overall feeling about the team’s performance so far?

Alex Plinck: I see a team that shows incredible unity that stems from the coaching staff and their manager. Each player is cognizant of their weaknesses, and the attempts to improve are present. It doesn’t always transcribe into results, but each player concedes their task, their goal, and the outcome.  On the performance side, unstable is the best word to summarize the 2019 season. The Rangers offense put together twenty-two runs in the last two games at Kansas City. In the previous seven games on the last road trip, the Rangers scored twenty-nine runs.

Darien Clark: My overall feeling is the team has exceeded expectations, but not by much. The pitching has been exactly where I expected it outside of Mike Minor, who could arguably be the team’s all-star. What really exceeds my overall feelings of their performance to date is their offensive approach. A lot of that credit goes to the new hitting coach, Luis Ortiz. The team currently ranks top seven in the MLB in total runs scored, RBIs, extra base hits, slugging and OPS. That’s with the slump they finally managed to get out of. Andrus, Choo and Gallo lead this charge as they are in the top half of just about every offensive category.

Corey Douglass: The 2019 Rangers have been a little on the inconsistent side so far, especially on the road. Yet, they have been better than expected when you consider the lack of pitching depth. Coming into the season, I thought they had the potential to be a .500 team and nothing I have seen to this point has changed that.

Who has been the best surprise so far?

Darien: I’m fascinated and surprised every time Mike Minor steps on the mound. Talk about a guy who has overcome all of the odds and doubt. He alone is giving some sort of life to this team every time his name is on the lineup card. With a 2.61 ERA, that puts him sixth in the AL  and eleventh in all of baseball. Beyond that, he has that 13 SO game along with two solid outings against the Houston Astros to look back on. At the beginning of the season, this starting rotation was the worst in the league, but because of Minor and Lynn’s contributions and ability to start every game thus far, they lifted the squad to somewhat of a merely sub-par rotation.

Alex: Logan Forsythe is putting together his best offensive campaign in his nine-year career. There are two significant factors to Forsythe’s success. First, Logan is seeing 4.66 pitches per at-bat this season, most in the majors, and 0.3 more than any other season (4.37 in 2017 with the Dodgers). Second, Forsythe is hitting .393 with runners in scoring position with an OPS of 1.026. Before 2019, his highest average with runners on occurred in his rookie season (2011) with the Padres, hitting .308.  His OPS with runners in scoring position this year triumphs his 2016 campaign with Tampa Bay where Logan achieved a .888 OPS with RISP. Bottom line, this kid can rake when it matters most.

Corey: The best surprise for me to this point has been Danny Santana. Santana had a strong spring but started off the year in the minors. He was quickly called up on April 14th when Rougned Odor was placed on the injured list. Through 25 games and 91 at bats, Santana is batting .319 and his versatility has kept him in the lineup regularly even with the return of Odor.

Who has been the biggest disappointment?

Darien: The biggest disappointment has easily been Rougned Odor. Talk about a streaky player. I realize it’s a long season and we shouldn’t give up on him, but man, the guy has been far from where he can be and should be, according to what his contract says. With a batting average of .146 and an OPS of .493, that puts him at the bottom of the team in offensive stats. The only guys performing to a lesser degree are Jeff Mathis and the pitching staff. Odor has 42 strikeouts on 103 at-bats which is second on the team only behind Gallo who has seen 125 at-bats. On the bright side, I look at Elvis Andrus in the early years of his career. He was always a streaky hitter who always found his rhythm in the second half of the season. Now, he’s a consistent and solid hitter each season. There’s a lot of growing to do, and if Rougie’s mindset is in the right spot, he could follow the steps of Andrus as he continues to learn the ways in the majors.

Alex: It was challenging to gauge the type of season for Shelby Miller could have had, and it’s hard to place the “disappointment” pin on him. However, in eight starts, Miller’s longest outing is 5.1 innings, and he’s gone five innings just twice. Miller’s given up four or more runs five times and allowed 23 walks in 29 innings. The plus coming into the season was that Miller’s velocity on his fastball was electric, notably coming from Tommy John Surgery. However, Miller’s K/9 rate is at its lowest of his career (6.1). The one positive trend is that Shelby’s walk total decreased to two or fewer in each of his last three starts. At this point, it’s unclear the Rangers plan for Shelby Miller, if the team demotes Shelby to the pen or if they’ll use an opener for him.

What player’s development (or lack there of) so far will have the biggest long-term effect on the team as they continue their rebuild?

Darien: Nomar Mazara will have the biggest long-term effect on this team’s rebuild. I say this because he has been a consistent everyday player pretty much ever since being called up. He has the highest ceiling of the young core on this team, because of his overall stature and abilities of playing baseball. There’s a reason why he’s in the outfield every night and a reason why he’s in the top half of the lineup every night. No matter how he learns and grows throughout his youth years, he will always be in the lineup. Sure, we all get that he’s been underperforming, but maybe a lot of Ranger fans, including myself, have unrealistic expectations for the 24-year-old. The front office, coaches, teammates and fans everywhere will continue to anticipate his breakout to being an all-star on a year-to-year basis.

Alex: Joey Gallo’s growth on his approach does more than signify him as one of the more steady, strong, and stalwart Rangers hitters (though that helps). What Gallo’s change in approach does is assist the hitter in front of him, mostly Nomar Mazara. When managers organize their lineup, they use those top-tier players as “protection” for the hitter before. I see this a lot with the Angels and Kole Calhoun. Mike Scioscia and even Brad Ausmus will place Kole in front of Mike Trout, especially when Calhoun is scuffling so that Kole gets more fastballs and strikes in the zone because the pitcher is fearful of Trout. I’m not equating Joey Gallo and Mike Trout, yet, but it’s a similar concept. The adaptation at the plate Gallo used is a carbon copy for the rest of the Rangers left-handed powerful lineup.

Who is the most player (majors or minors) who has the most to gain or lose from their performance before July 31st?

Corey: The player with the most to gain ‪before July 31st‬ is Mike Minor. Minor is potentially pitching for a chance to be a trade deadline pickup for a team looking to make a run in October. On the flip side of that, the veteran pitcher could also pitch his way into the Rangers future plans if he continues to pitch like an “ace.”

Alex: One of the main question marks in this organization is the future for Nomar Mazara. Mazara has a strong arm in right field, “mazz”ive power, ability to hit to all fields, able to work the count and an excellent teammate in the clubhouse. These are all MVP qualities, and those qualities struck hard in his rookie season. Since then, Mazara’s performance hasn’t deteriorated, but it stayed put, which isn’t what an organization wants in young core development.  The Rangers have an interesting decision on Mazara when the trade deadline looms. Nomar is a player that teams will eagle eye on because of those pre-mentioned characteristics. Other organizations will feel that they have the staff to raise Mazara’s game. With a lefty-heavy outfield and a lefty-heavy roster altogether, the Rangers may have to make a hard choice. That choice may point to Nomar Mazara.

Does that satisfy your daily need for Rangers thoughts??? It does mine. That was a lot.

With still close to 120 games remaining in the season, there’s no way to comfortably predict what this team will do the rest of the way.  Too many players have had yo-yo style performances and there’s a decent chance the starting pitching staff won’t look anything like it does now a couple months down the road. As the great Samuel L. Jackson once said:

Hold on to your butts.