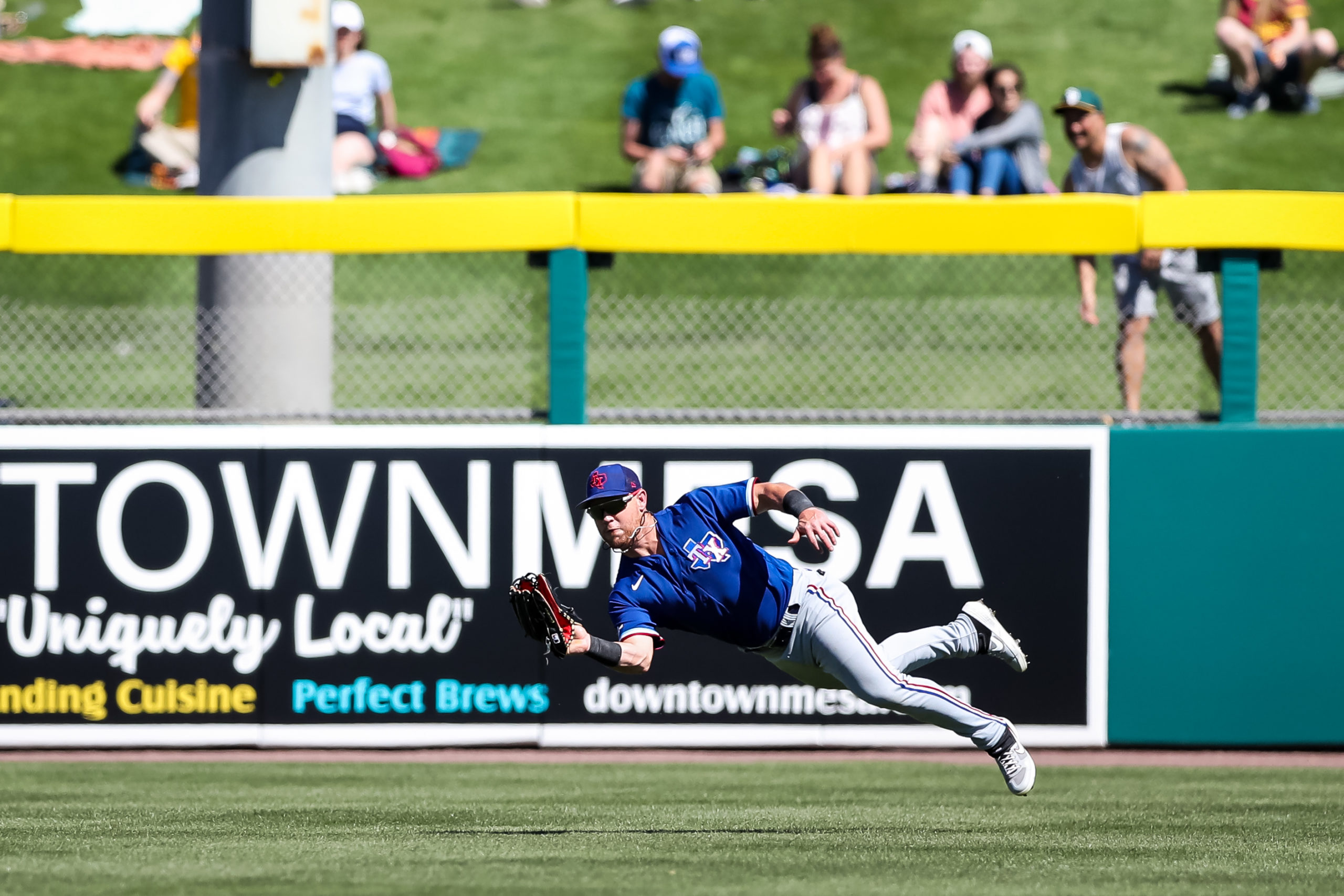 Kole Calhoun is a name that Rangers fans cemented in their heads for eight years with the division rival Angels. He won a gold glove in 2015 with the Angels in right field and is a lifetime .280 hitter against Texas, higher than any other American League team with 14 or more at-bats against. Now that thorn in the side of Rangers fans joins the club looking to snag an Opening Day spot and become a voice in the Rangers’ clubhouse.

“Camp has been great,” Kole said. “Personalities in here have been a lot of fun. I think everyone is blending well together as we get close to Opening Day.” Calhoun spent the past two seasons with another franchise that most would say is behind the Rangers in the rebuild process, the Arizona Diamondbacks. “It was a good organization that I enjoyed because I’m from Arizona and now get the opportunity to go to Texas and play there,” Kole told me. As for what a takeaway was from Arizona? “Nothing necessarily,” Calhoun responded. “I’m not going to put a finger on it that [you] can’t reinvent the wheel. Maybe, an energy or something along those lines, but mostly I’m excited to be here.”

Rangers Kole Calhoun with a defensive gem in right. pic.twitter.com/6kLNm85ipU

Two weeks into camp and Kole Calhoun’s mentality is rubbing off on his new teammates, and that’s a good thing. “I’ve seen Kole Calhoun’s mentality rub off in every way on every guy,” Rangers’ manager Chris Woodward said. “The fight that this guy has on a daily basis, the banter, the quality of the teammate, the characters, [and] the way he treats people. He’s a joy to have around.”

For a veteran like Charlie Culberson, who played against Kole in the minor leagues and major leagues, he’s noticed the upbeat personality Kole brings to the clubhouse. “Kole is lively,” Charlie said. “He keeps things light. [Kole] is fun. He’s fun to have around, [and] he’s got a lot of experience. You need guys like that in the clubhouse who are good people, good ballplayers, and that will go out there and play hard every day. He’s one of them.”

Another aspect Kole Calhoun brings is the fight that integrates into the culture the Rangers implement to their players. “It’s everything that we want here,” Woodward said. “It’s unique to every guy. I don’t want to change anybody’s personality, but he’s definitely risen the spirits of everybody in camp. He has that effect on people, and that’s why he’s here.” For a younger player like Eli White, the impact of Calhoun isn’t lost. “It’s been awesome. He’s got that bulldog mentality like he’s the best player out there. He’s a gold glover, [so] watching him work and being out there and getting to learn from him and see how he goes about his business is cool and valuable for me. He’s a leader, and he’s good at what he does.”

The outfield arrangement for Calhoun is still undecided. Kole can either play right field or left field though his 980 of 982 MLB starts have come in right field. The outfield’s versatility can push Kole to right if Adolis García plays center and someone else plays left (either Brad Miller, Willie Calhoun, Nick Solak, etc.). If Eli White plays center field, then Kole goes to left, and Adolis goes to right field, but it all depends on which direction the team wants to go. However the alignment goes, it’s clear that Kole Calhoun’s footprints are cemented in the Rangers’ clubhouse.

Quote of the game goes to Kole Calhoun. Kole has been referred to as "frustrating to play against." I asked him if he learned that mentality from someone.