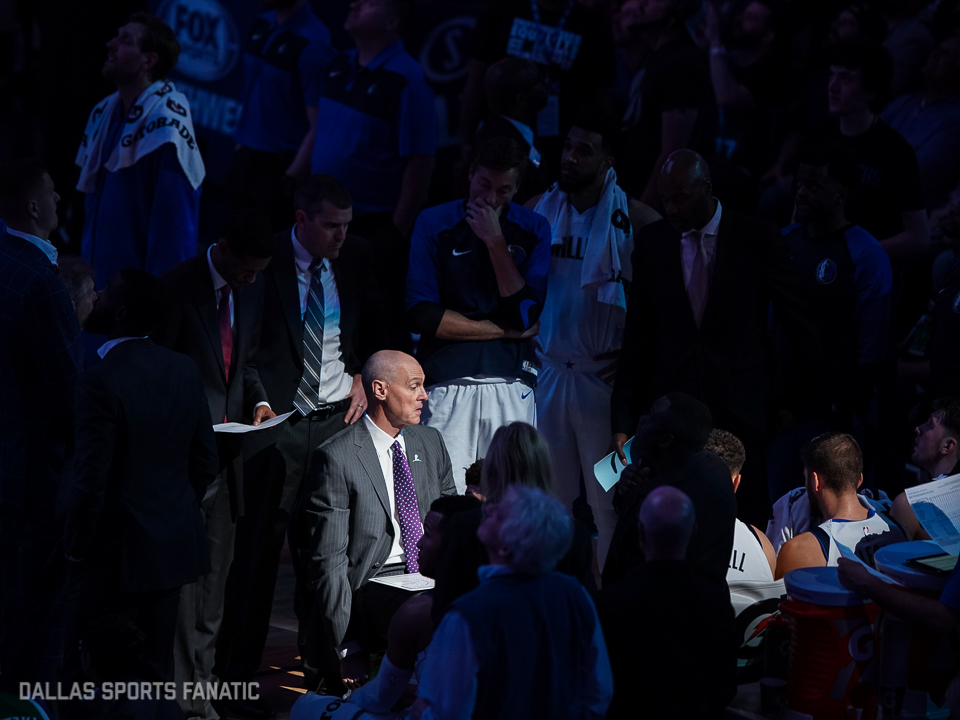 Most would tell you that the hallmark of a great coach in any sport is the ability to adjust and get the most out of what he or she is given. That can mean the skipper making the right call on when to go to the bullpen, an offensive coordinator dialing up a great call on a critical third down, or in Rick’s case, when you lose your 20-year-old MVP candidate on a roster short of star power.

And here the Mavericks are four games into a Luka-less stretch at 2-2, featuring road wins over Milwaukee and Philadelphia.

How? They certainly aren’t overwhelming anyone with talent. Many of those who cover the team, myself included, thought this was surely an 0-fer. Five games against the five best teams in the East is brutal, but it seemed virtually impossible to manage without Luka.

The Mavericks rank first by a mile in points per poss after makes.

Among best after timeouts.

Close to league avg in pace.

They have the NBA’s 2nd-best scoring margin and they’re succeeding in a manner that screams “this will translate to playoff basketball”.

The great equalizer for this team, as it has been for years, is the brilliance of Rick Carlisle. Sure, the players have been great. Porzingis has finally found at least some offensive rhythm, Seth Curry has been a microwave off the bench, and Brunson has stepped up his play. But we’ve seen Carlisle take a team full of misfits and make them hyper-competitive too many times for this to be a coincidence.

He has opted for a more “random” approach since Luka went down against Miami. Luka generally has full control of the offense when he is playing, and understandably so. But while he prefers to plays a more half court oriented game, things are easier for the others when they aren’t up against a set defense and are playing with more “flow.” It’s been of great benefit to two guys who have struggled to find rhythm in Curry and Porzingis.

Celtics head man Brad Stevens had high praise for Coach Carlisle’s performance prior to their match up Wednesday.

“The speed of the execution is at a different level than most teams,” he said. “They fly into screens, their spacing is exceptional, and they have a lot of skilled players…You better not be a step behind, because you’re two steps behind against these guys.”

Carlisle’s team has overachieved all season. They entered the season with moderate expectations, likely to be a fringe playoff team. Various media outlets had them pegged as maybe a 40-win outfit. That sounds silly now, but before the year it wasn’t out of the question. People knew Luka was terrific, but what about the supporting cast? We hadn’t seen KP in nearly 20 months. Guys like Tim Hardaway Jr., Justin Jackson, and Dorian Finney-Smith hadn’t proved to be winning pieces and all were expected to be rotational fixtures.

We are days away from Christmas and Carlisle has guided that same team to 19 wins and a tie for fourth in the loaded Western Conference. For some spectators, that doesn’t make sense. But for those who have followed the team throughout his tenure, it comes as no surprise.

Hardaway spoke afterward about how Carlisle worked with him individually on his shot to make some small correction that obviously worked. It's an incredible quality that RC has. Very few HCs spend that time leaving it to development coaches. He goes the extra mile

The roster isn’t ideal, but in a weird way it’s perfect for him. It highlights his greatest and perhaps most important trait: The ability to get the most of his personnel. His players know and appreciate that about him.

“It’s always important no matter what your career is, you feel that the guy in charge has confidence in you,” reserve forward Justin Jackson said. “Ever since I got here I feel like he’s had that confidence in me and what I can do, and that is key.”

Jackson joins a long list of guys Carlisle has helped save in the NBA. Monta Ellis, OJ Mayo, Vince Carter, Brandan Wright, etc… All of whom were integral pieces to Carlisle teams. And all of them came over after an unceremonious exit at their previous spot.

December might be too early to talk Coach of the Year. However, what Carlisle and co. are doing is starting to raise some eyebrows across the league. With the brightest young star in the NBA galaxy and the most efficient offense in the history of the sport, Mavericks games are becoming must-see TV.

Kristaps Porzingis knows more than anyone what inept coaching will do to a franchise. He is certainly appreciative of his new situation playing under Rick Carlisle.

“We have a great coaching staff,” he said. “We have a great support system around us players, and we just go out there and do what we’re supposed to and the results come.”