Ahhh, major championship golf is back.

It’s been 13 long months since a major golf tournament was held – the 2019 Open at Royal Portrush.  In that time we’ve seen the world pause due to the COVID-19 pandemic, unsure if and when we’d be able to watch the golf world’s best compete for one of the four trophies it values above all else.  But alas, it is here, the 2020 PGA Championship at Harding Park in San Francisco, CA.  My heart filled with joy just writing that sentence.

So please ensure your tray tables are up and set your seat to it’s full, upright position.  It’s time for major championship golf.

It goes without saying that this field is an absolute monster.  We’ve got 92 of the top-100 players taking their shot at the year’s first major.  It’s a field that includes Tiger Woods and newly crowned world number one Justin Thomas – who won last week at the WGC FedEx-St. Jude Championship.

With 48 of the top-50 in the WGR in contention this week the tournament could go to anyone.  So, here’s some things to watch for.

Only one player has ever won three PGA’s in a row.  That was Walter Hagen in the 1920’s when he secured a record four straight.  While that’s immensely impressive, the game is much different now and what Brooks Koepka has a shot at doing is nothing short of incredible.  In 2018, he narrowly edged out a win vs the greatest golfer of all time, Tiger Woods, at Bellerive.  In 2019, he held off his buddy Dustin Johnson at Bethpage.

Brooks enters this week in top form after a pretty slow start.  Leaving many to wonder if his knee injury was worse than he was letting on.  He shook those silly doubters to the side last week, however, when he finished T-2 behind JT in a week that included a filthy 62.  A 62!  The knee is fine.

Koepka is a guy who has been notorious for not being able to motivate himself for the random golf tournament.  He wasn’t put on this earth to grind through a monotonous week at the John Deere Classic.  He was put here to show up when the lights shine the brightest and that’s exactly what he’s done in his career so far.  In 2019, he finished no worse that 4th in any major, including the win at the PGA.  In the last 12 majors, he’s got four of them in his trophy case and eight top fives he wishes he could have back.  I mean, he hasn’t finished outside of the top ten in a major since 2017.

When the greatest to ever do it is in the field it’s time to pay attention.  While most guys rushed back to the golf course once the Tour was ready, Tiger took his time, playing in only Jack’s Memorial Tournament where he finished in a lackluster 40th place that included a 76 on Sunday.  He admitted to needing to get used to the nerves after the layoff and despite the bad finish he remained positive in his post round interviews.

The good news for Tiger?  He has played historically well at Harding Park.  He won the WGC American Express here in 2005 and was a perfect 5-0 in the 2009 President’s Cup.  Woods is clearly at a point in his career where he is going to be preparing to play in the most significant tournaments and rest outside of that.  He showed up to San Fran early and played a practice round Sunday, a move that was successful for him ahead of his 2019 Master’s victory.  We all remember that day.  Feels like 20 years ago.

Tiger is the greatest of all time for a reason and it would make anyone a pure fool to doubt his abilities.  I expect him to compete and wouldn’t be surprised at all if he’s at the top of the leaderboard come late Sunday.

It’s no secret that Dallas’ favorite golfer has been in a severe rut since his 2017 Open Championship win.  In fact, he’s been no where near that top form we came to expect from him when he won three majors in three years on top of double digit PGA Tour wins.  However, golf is a funny game and all it takes is one pure swing of the golf club to get you back on track.

This week at Harding Park, Jordan has a chance to complete what few other golfers have been able to do – win the career grand slam.  With his 2015 Master’s, 2016 US Open and 2017 Open all he needs is the elusive PGA Championship to join the greats of Gene Sarazen, Ben Hogan, Gary Player, Jack Nicklaus, and Tiger Woods as the only golfers to win all four majors.  It’s worth nothing that Tiger and Jack did it three times.

The world has witnessed Jordan at the pinnacle of golf and it continues to be a head scratcher when we think about how this came about.  If anyone can regain that confidence and start winning again it’s Jordan.  Expect him to be competitive this week.

Boy, do we have some awesome ones:

I’m foaming at the mouth. 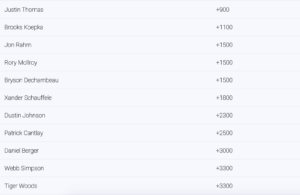 It’s a par 70 and after they added 400 yards to make it PGA Tour worthy, it tips out at over 7,200 yards.  It’s set against the cypress tree-lined Lake Merced, and though the water hazards aren’t really in play, the over 40 bunkers and long second cut will make sure accuracy is on display this week.  If Bryson Dechambeau wants to try and overpower it, he’ll be in for a tall task.

It’s officially major golf season.  Phew, we made it.