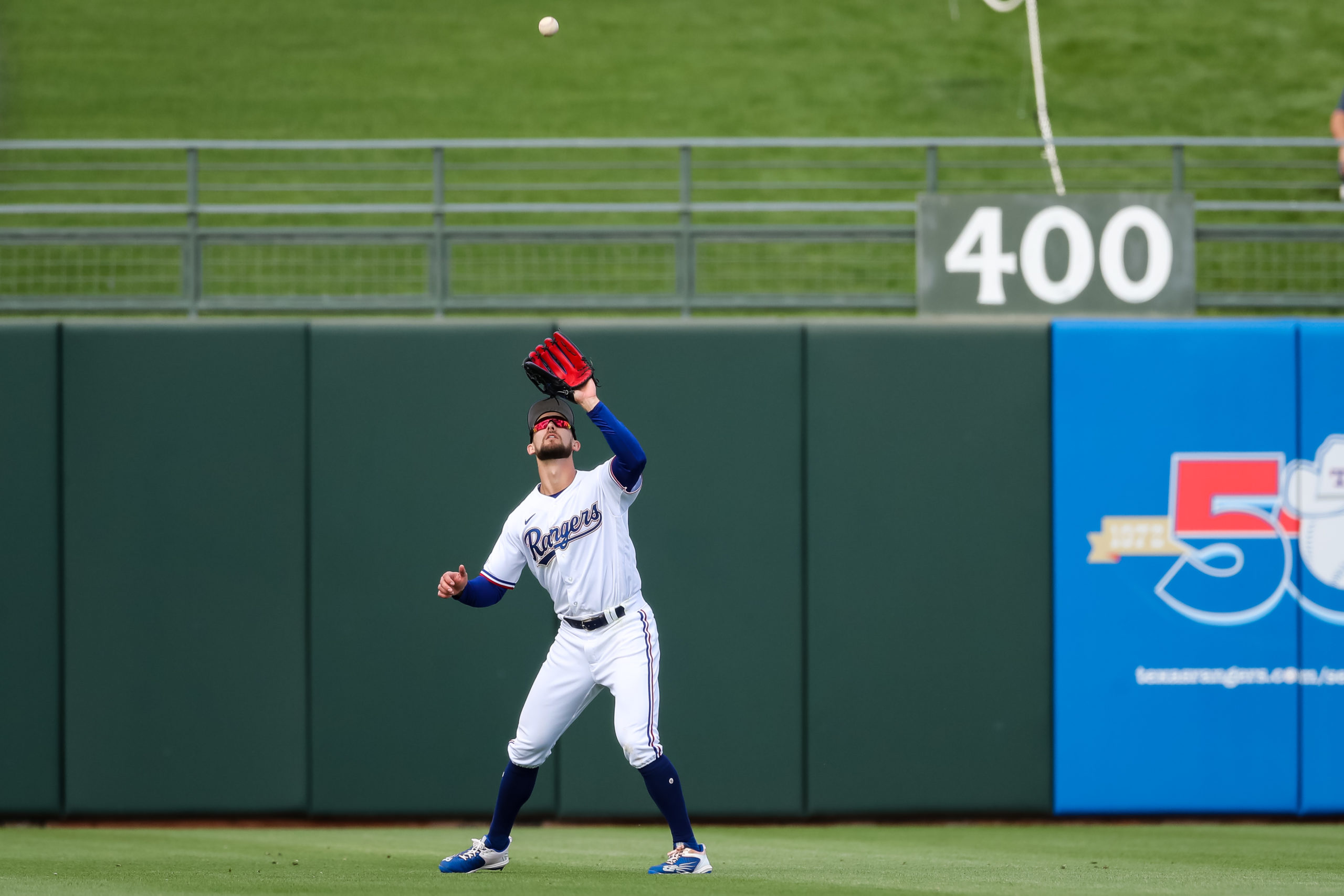 It’s no secret that the Rangers coaching staff raves about Eli White’s speed and defense. Although the old baseball saying goes, “you can’t steal first base.” In 2022, White has started specifically against left-handed pitching (he has six at-bats against right-handed pitching as opposed to two at-bats before Tuesday).

“I’ve always felt comfortable with both [right-handed and left-handed pitching],” Eli told me. “There’s a couple of years in the minor leagues where my splits were better against righties and lefties, but I think that’s coming from [me facing] more righties.” Rangers’ manager Chris Woodward entered Eli’s name in the lineup Tuesday against a right-hander for the first time this season. “[Eli has] been successful. He’s done a really good job,” Woodward said.

Eli told me that the team has a go zone posted in the batting cages that shows where they need to attack that starting pitcher for the day. The technology implemented helps pitch shapes that specify to that pitcher the Rangers face. “I’m training the angle of the balls coming in and how my bat path is needing to work through the zone to have success.”

An aspect of White’s speed in the box is his ability to bunt. He picked up his first MLB bunt hit three weeks ago with a second one following quickly. Half of Eli’s eight hits haven’t made it past the infield, where he’s controlling the defense with his speed. “[Eli] is the type of guy who can impact with his speed,” Rangers’ third base coach Tony Beasley said. “He can get the bunt down even when they anticipate, and it’s still a tough play because of his speed.” One thing Chris Woodward mentioned in Spring Training was White’s indecisiveness on the bases. “He does his homework, [but] there’s a tiny bit of hesitation,” Woodward said back in Spring Training. “When it comes to jumps, he doesn’t fully trust. Sometimes there’s a slight hesitation, then he goes, which leads to a late break.” However, he’s becoming more confident, to the notice of the coaching staff, which aided him to a perfect 4 for 4 stealing bases and taking the extra base 75% of the time.

Eli White puts the Rangers on the board in the top of the 6th! @Rangers | #StraightUpTX | 📺: BSSW pic.twitter.com/txlAhZNqvu

What’s changed for Eli in 2022? The first is deviating away from the fear of getting thrown out. “A lot of it comes from the coaching pushing me and having confidence in me to go out there and do my thing [and] not being afraid to get thrown out,” Eli told me. “That’s one of the things I always hated was getting thrown out on the bases and so having that freedom out there and being able to trust my abilities.” As Eli said, it stems from Beasley and first base coach Corey Ragsdale. “If there’s any chance of stealing a bag, we want him to take that shot and force teams to make plays on him,” Beasley said. “Teams should have to game plan for him when [White] is on the base paths. We want to continue to free him up mentally and let him feel good about what he can do on the base paths and trust that.”

Second is Eli White’s overall confidence, whether on the bases, at the plate, or in the field. “Overall, [I’m seeing] a more confident Eli White,” Chris Woodward said. “When you hit, a typically become a better baserunner, outfielder, and just better everything. Food tastes better, water tastes good, it’s just baseball.” Of course, Eli homered in game two Sunday at Yankee Stadium, and I wondered if the ballpark construction changes his approach at the plate. “Not for me because I don’t see myself as a home run hitter,” White said. “I think I have power and can have the ability to hit home runs, but that’s not something I think about. I’m still trying to stay [in] that big part of the field and attack the pitcher in the certain zones I’m looking.” I asked Eli if it stunned him that the ball Sunday got out. “I was a little bit, yeah, I thought it was going to be a double off the bat.”

The key to success is consistency for Eli White. Can he maintain what he’s been able to do in the first month? “Having success helps you have confidence,” Tony Beasley said. “[Eli] knowing that he doesn’t have to be perfect. He can get the ball down even when they anticipate it, and it’s still a tough play because of the speed. Speed should never slump.” According to Baseball Savant, Eli White is tied for second in MLB in sprint speed (30.1 feet/sec) with the Dodgers’ Trea Turner, only behind the Royals’ Bobby Witt Jr. Also, since Eli’s debut in 2020, his sprint speed has been third among all MLB (averaging 30.4 ft/sec). It’s a weapon that White is starting to utilize that the team hopes the opposition will take notice of.

Woodward started Eli in three straight games (Mon-Wed) for the first time this season, and in each of those three games, he has left White out there for the entire game. Entering Monday, Eli had only started and finished a game twice, but there’s where the confidence for Eli is coming into play and creating havoc all other the place. “He’s an impact player,” Woodward said. “[Eli] is our biggest engine, probably in the organization, so it’s nice to see him have success.”