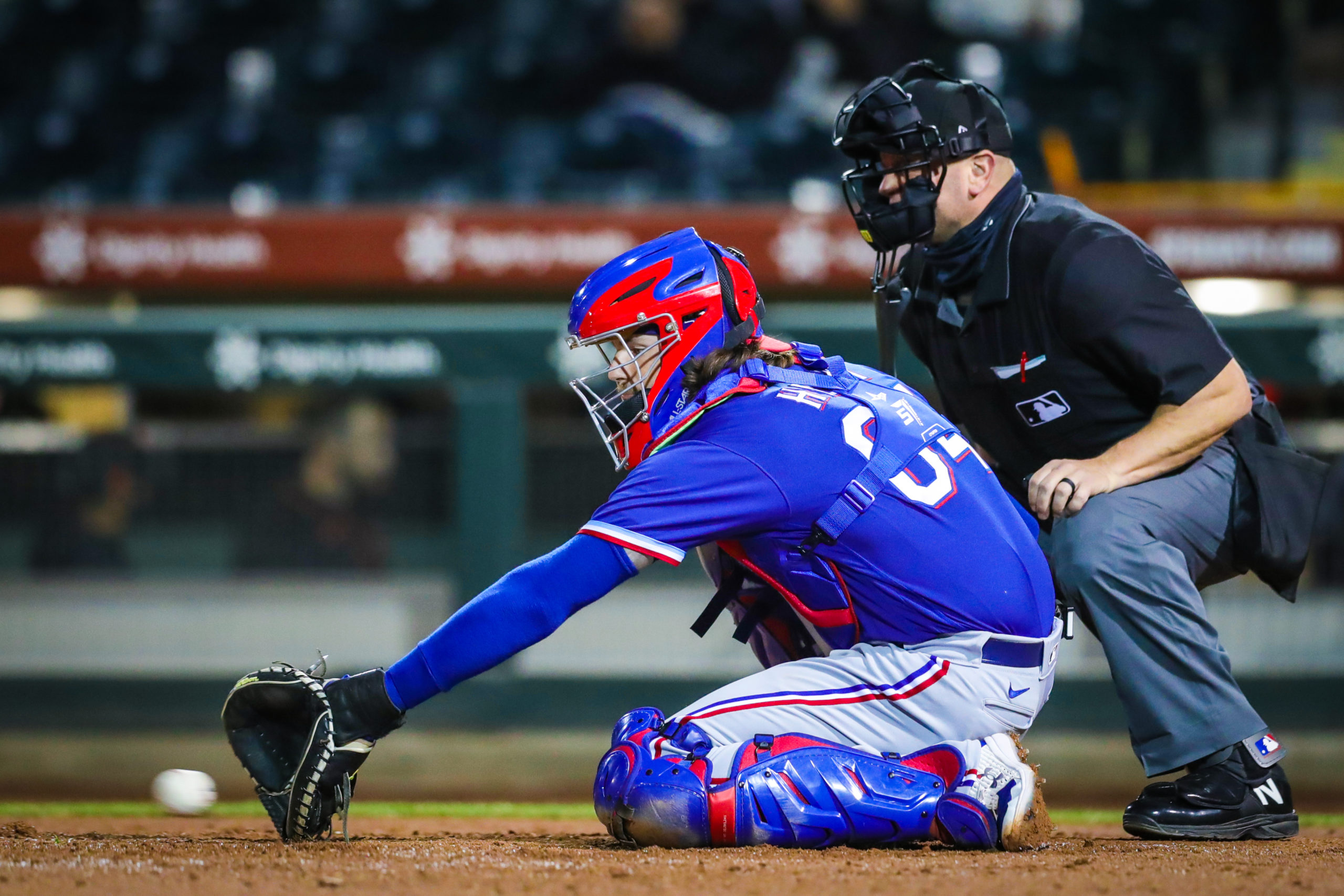 ‘The Kid is Hungry’: How Jonah Heim is feasting on his role with the Rangers

‘The Kid is Hungry’: How Jonah Heim is feasting on his role with the Rangers

The first time Rangers fans heard of Jonah Heim was probably August 25th, 2020. Heim was in the lineup to make his major league debut with the Oakland Athletics against the Rangers. He knocked his first big league hit and then came back to Arlington a few weeks later for two more appearances. Just over five months later, Heim became a Texas Ranger in a deal that sent  fan favorite Elvis Andrus to Oakland. The front office raved about his approach and his work behind the plate despite the fans not familiar with Heim. “He is an excellent defensive player,” Jon Daniels said after the trade in February. “Pitchers love throwing to him, plus-framer, plus-thrower.” Two months into his Rangers’ quest, Heim is making a fast impression and showing success in the big leagues.

Oh and that's the first MLB homer for Jonah Heim too. With flo like that on your head, he hit it in style. #StraightUpTX https://t.co/mLDasUFeAN

Heim entered Spring Training as a major candidate to make the club. However, the question came if it was more beneficial to have Heim get more consistent reps in AAA or play once a week as a backup catcher in the big leagues. I’m not sure if the minor league season delay played a part in promoting Heim to the Opening Day roster, but the Rangers decided to give Jonah that shot. Rangers’ manager Chris Woodward also pointed out that Heim’s work in Oakland became beneficial for the pitching staff.

“Jonah is great,” Woodward told me Tuesday. “He is coming from Oakland, so they did things a little different, and he took some of what he learned there and brought it here and helped our guys out.”

In only two starts, Jonah Heim is already making an impact behind and at the plate. The first two team victories came with Heim behind the plate and excellent outings by Jordan Lyles and Dane Dunning. The starters combined for 10 2/3 innings and three runs allowed. For the comfort between younger catchers and a veteran pitcher like Kyle Gibson, Kyle raves about the ability to store the information in conversations between them. “It takes conversations with Trevi and Jonah,” Kyle told me. “They do such a good job of logging that information.”

On Tuesday’s club win over the Blue Jays, Jonah notched one more big-league feat. In the sixth inning, batting right-handed, Heim lined a Tommy Milone fastball just over the wall in left field for his first MLB home run. In his first Rangers’ MLB start last Sunday in Kansas City, Heim raked his first MLB extra-base hit with a double as his eight hits in 2020 were all singles. “I felt happy for him,” Rangers manager Chris Woodward said after the game Tuesday when Jonah hit his first homer. “He was like a kid in a candy store when he came into the dugout.” Let’s not forget his dad, James, calling it four hours before it happened.

One teammate that showed excitement was Nate Lowe. In December of 2017, the Tampa Bay Rays sent Heim to Oakland for Joey Wendle. Before that, both Lowe and Jonah Heim were teammates on the Bowling Green Hot Rods (the Low-A affiliate of the Rays). It was the first professional season for Nate as the Rays drafted him the summer before (13th round). For Nate, it brought a massive grin on his face talking about Jonah’s feat Tuesday. “To see his process and see how he’s moved from team to team and looked for a role and now all of a sudden found a role and had success with it, I’m so happy for him, as a teammate, new father, and a husband. That’s so cool,” Lowe told me.

He's gonna want that ⚾️ back!

The Rangers’ catching depth is deep. Remember, the work Sam Huff put in 2020 and add Trevino and Heim and the Rangers have a strong catching core. A couple of weeks ago, I asked Chris Woodward if Heim could sustain all sides’ success in the big league, a difficult task to do. “I do, he’s a smart kid,” Woodward told me. “He wants it and comes in with a good attitude and wants to get better and wants to improve and constantly asks questions on how to do that.” Can Heim sustain his success in the majors? Well, what’s shown in two games and Spring Training is the comfort between him and a pitcher, which hardly falls into a slump.

The offense may go into a slump, but his craft behind the plate is part of the value he brings. I see the Rangers sticking to Trevino and Heim with the rebuild, especially with Jonah being a switch-hitter. For Jonah, however, this is just the beginning. “I look forward to seeing him continue to grow,” Woodward told me after Tuesday’s game. “He’s obsessed with being good and being better. The kid is hungry.” Rangers’ fans should be looking forward to Heim’s growth, like a nice plate of Heim BBQ brisket.

Hey thanks buddy! My heart was beating so fast too! Go Rangers!!! https://t.co/hp6DJoNVtC