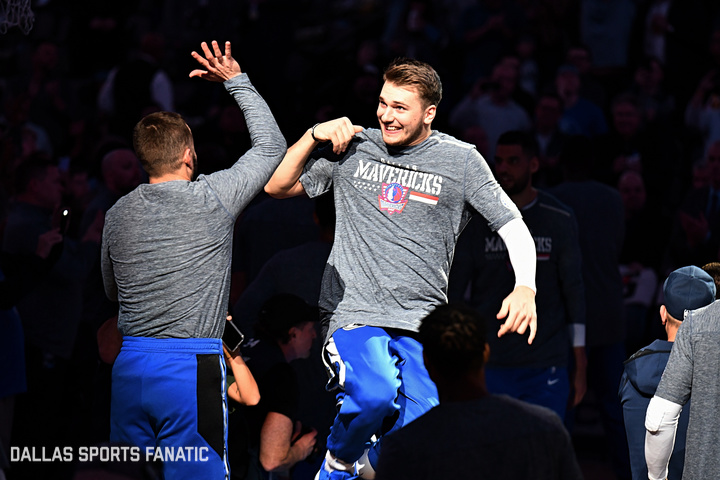 The legend of Luka Doncic and other takeaways from Mavs/Timberwolves

The legend of Luka Doncic and other takeaways from Mavs/Timberwolves

It’s no secret that road games haven’t been fun for the Mavs or their fans this season.  With a blowout loss here and crunchtime meltdown there, things haven’t been pretty for Dallas away from the American Airlines Center.  Friday night’s 119-115 clutch victory over the Minnesota Timberwolves is just one game that merely boosts the road record for Dallas to 4-18, but it certainly was an important game with big performances and a heartbreaking injury.

It was a rollercoaster of a night for the Mavs, but it came down to one thing in the end: they had Luka Doncic and the Minnesota Timberwolves did not.

The 19 year-old rookie was the player who Dallas rode down the stretch in a road game it desperately needed to win, and he did not disappoint.  The Mavericks had been gutchecked by a Minnesota run every time Dallas pushed their lead to double digits.  With 6:28 left in the game, J.J. Barea made a lay-up to put the Mavs up 102-92 (more on Barea in a second) but the Wolves followed that up with a 19-8 run over the next five minutes to go ahead 111-110 with just under two minutes left in the game.

Then there was Luka.

Doncic would go on to score seven straight points for the Mavericks to put them in a position to allow Harrison Barnes to ice the game with two free throws in the final ten seconds.  A tough floating shot while falling towards the baseline. A driving dunk.  A pull-up three with under 25 seconds on the clock?  I mean, come on.  You have to have something special to pull off things like that in clutch situations.

No! Not J.J. Barea!
Injuries are just part of sports, unfortunately.  The worst part is that no one is immune to them.  Not the superstars.  Not the end of the roster guys.

Not even your favorite less-than-six-foot Puerto Rican guards.

The sight of J.J. Barea grabbing at his heel, struggling to limp towards the bench, having to sit down at the free throw line surrounded by comforting teammates, then being carried back to the locker room… all of it almost too much to handle for any long-time Mavericks fan.

Source: The Mavericks believe J.J. Barea tore his right Achilles tendon. Barea, 34, a longtime Dallas fan favorite who played a key role on the 2011 title team, is averaging 10.9 points and 5.6 assists as the Mavs' sixth man this season.

Reports like the one above from the credible Tim MacMahon leave no doubt that at some point before Sunday’s home game against Golden State, the Mavs will announce the end of Barea’s season due to the injury.

It goes without saying how much this will stink for the Mavericks on the court since Barea is the engine of their second unit, but the locker room impact is huge as well.  In my time in the Mavs locker room, no one seems more universally loved than Barea.  He can chop it up with any teammate and he is always willing to talk to the media if needed.  While he’ll still be around the team, it just won’t quite be the same without him in a uniform.

From everyone in Dallas, get well soon, J.J.!

Bonus
Harrison Barnes deserves major praise for his fourth quarter performance in this game.  Barnes scored 9 of his 23 points in the final frame with none bigger than the two free throws he made to make it a two possession Mavs lead with under ten seconds remaining.  Barnes was a forgettable 7/19 overall from the field on the night, but an efficient and important 4/7 from deep and 5/5 at the free throw line.  He is now a scorching 30/31 on free throws in the month of January… Interesting minute totals from Rick Carlisle tonight: Just 23 for Wes Matthews, who seemingly didn’t play at all down the stretch of a tight game. 16 minutes for Jalen Brunson, whose minutes have been as high as 26 in Philly last Satuday night or as low as a DNP-CD the night before when the Mavs were in Boston.  The rookie has handled the fluctuations well.  Also a DNP-CD for Devin Harris tonight.  With the unfortunate Barea injury, Harris is sure to receive a boost in playing time along with Brunson… With the win, the Mavs are now 20-22 through 42 games.  Dallas did not win its 20th game until their 66th game back on March 10th last season.

Next up for the Mavericks is a home date with the two-time defending champion Golden State Warriors.  Sunday night home game equals early tip-off at 6 PM.