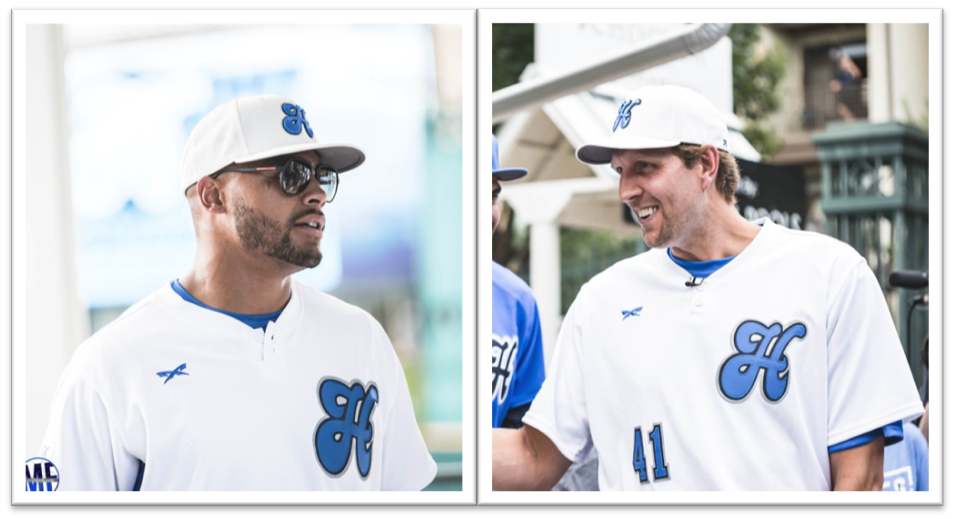 The Mavericks and Their Cowboy Doppelgangers

In the spirit of DFW sports fandom, let’s compare some of the pillars of both of our favorite franchises. Let’s find their doppelgangers!

The Mavericks and Their Cowboy Doppelgangers

It’s officially August. And you know what that means.

Unfortunately, all the month of August really provides us is talking points. No highlights or dramatic finishes. The games don’t count, and the players have barely taken the field/court together. And all that leaves us to do is speculate. So as the fans and sports media, let’s do what we do best and talk.

In the spirit of DFW sports fandom, let’s compare some of the pillars of both of our favorite franchises. Let’s find their doppelgangers! For those who aren’t sure what a doppelganger is, well it’s is somebody who looks identical to someone else. We aren’t going to be comparing looks though. In this context, we are going to be comparing the players and the similarity of some of their roles for their particular team.

So without further ado…..

I promise. This has nothing to do with their height.

Fine, maybe it does a little.

Okay, Okay! It has everything to do with it!

In all seriousness, these two, while they play smaller roles have a big impact on their teams with their energy. They both fill the ‘spark plug’ role that seems to be universal across all team sports. JJ Barea uses his feistiness and diminutive stature in a league full of behemoths, to create for himself and for others. Similarly, Cole Beasley usually working in the slot position, often draws a linebacker or safety in coverage. At that point it really is over. He utilizes those trademark quicks and his precise rout running to deliver “The Sauce.” While they aren’t the stars of the team, they’re integral to their teams success.

Under promise and over deliver.

My life motto and the words that encapsulated these two’s first year in Dallas.

When Seth Curry brought his talents to Dallas, not many people knew of him other that he was the little brother of two time MVP, Steph Curry. As evident by him only getting a deal worth slightly over two million annually, comically low for an NBA salary. He then responded with a career year for the Mavericks. Delivering efficient, consistent production that lead to him establishing himself as part of the Mavs young core.

As did his Maverick counterpart, Anthony Brown came in with low expectations. Sixth round picks aren’t even guaranteed to make the roster, much less earn a starting spot. But sure enough, that’s what he did. As often is the case in football, injuries happened and Brown was thrown into the fire. Turns out, it was a blessing for the the Boys. And now, Brown has given them an unexpected steady option on the outside, much like Curry did for his Mavericks.

A phrase commonly uttered in sports, “The last line of Defense” really applies to these two.

It’s a phrase that is synonymous with their positions as well.

Back when the Mavericks executed the robbery of Nerlens Noel, I mean trade, this is what they were hoping to get. A player who can cover up mistakes of his teammates on the perimeter, and with this team, there were quite a few. The Mavericks for years have been searching for their “Last Line of Defense” and with Noel, it appears they have found it. The ongoing contractual standoff between the two is not vindictive of how the two parties feel of one another. Noel made a great impression on the Mavs, and they did him. It is a matter of when, not if he gets his deal, because his back line presence is just too valuable to let him walk.

Also a valuable back end presence is Cowboys safety Byron Jones. Like Noel, he often draws the responsibility of covering the opposing teams largest target. Consistently doing a good job using his excellent technique, earning himself the reputation as the leagues premier “Tight End Stopper.” He is also asked to patrol the Cowboys back end. Using his well documented athleticism, Noel’s defining trait, to make plays all over the field.

Whenever you think of guys like Sean Lee and Wesley Mathews one trait should immediately come to mind.

Whenever Wes Wathews came over from the Portland Trailblazers in the summer of 2014, he was coming off an Achilles tear. What followed was a season marred by career lows in several departments, and a noticeable lack of explosion in his game. While he has steadily improved from that first year, his numbers are never going to blow you away, but the front office swears by him. Why? He’s a culture guy. “The right kind of guy” as Jason Garret would say.

Sean Lee also fits that bill. Much like Wes, he has suffered a devastating knee injury of his own. Quite a few of them, actually. But each and every time he goes down, he gets back up and gets back to it. That’s the definition of toughness. or insanity…

Besides the fact that these two are the best defenders on their team, they’re the vocal and emotional leaders as well. Not to sound too cheesy, but they’re the heartbeat of their teams defense. And those kind of guys go along way in building a winning culture.

Do I really need to explain myself here?

Probably not, but I will anyway.

In Dirk Nowitzki, you truly have one of the greatest players the game of basketball has ever seen. He is a 13 time all star, league MVP, Finals MVP, NBA champion, and one of six players to ever score 30,000 points in his career. I could go on and on about Dirk’s accolades on the floor, but it’s his greatness off the floor that has him so near and dear to us all. The leadership, class, loyalty, and dedication he has showed to our beloved team and city has elevated him atop the mountain of DFW sports heroes.

Much of the same can be said for Jason Witten. The Cowboys all pro tight end will seemingly never stop playing at a high level  *Knocks on wood*, And he has always done it with such class and dignity, making him a fan favorite. After so many heartbreaking defeats and so much mediocrity, Jason Witten still comes ready to work and does so every day.

At their advanced age, both of these guys find themselves in similar roles. They are both surrounded by exciting young talent, leading their teams into new eras.

I can’t think of two better guys to do it.

A term you often hear thrown around regarding NFL ball carriers is “Work Horse.”

Even though they don’t play the same sport, both Ezekiel Elliott and Harrison Barnes fall under this umbrella.

Last summer when the Mavericks inked Harrison Barnes, many thought it was a grave mistake. Why pay that much money to a role player? Well, come to find out, Harrison Barnes was actually much more than that. In his first year in Dallas, “HB” shockingly scored almost an average of 20 points per contest. Even more impressive, he did most of it on his own. Frequently attacking out of isolation’s and doing so efficiently. The Mavericks lack of talent and injuries coupled with Harrison Barnes newfound iso success led to ALOT of touches. Rick Carlisle fed Barnes post touches for breakfast, lunch, and dinner.

Speaking of getting fed (see what I did there?) Ezekiel Elliot led the league in both rushing yards and attempts while the cowboys bulldozed their way to the NFC’s number one seed. Like Barnes Mavericks, the Cowboys played bit of an older style last season to accommodate their stud. They were one of just two teams in the NFL who ran the ball more than they threw it. While the Mavericks changed more out of necessity and had far less success, both guys were productive in their “Work horse” role.

There are no two positions in sport compared more to one another than point guard and quarterback.

You will often hear commentators referencing players in various sports saying “He’s the quarterback of this team” or “He’s the point guard of this team” and there is a reason for that. These are the two most important positions in sports. And the Cowboys and Mavericks are blessed with two of the bright young stars at the positions in both sports.

While we haven’t see much of Dennis Smith Jr., we do know this. He is a dynamic player and talent, and expectations for him are through the roof. While others might succumb to that pressure, Dennis Smith is just different. He has a quiet confidence and demeanor about him that makes you feel at ease with his development.

Talent and high character are nothing new to Cowboys signal caller Dak Prescott either. From the moment he stepped onto the scene, he wowed with his impressive poise and leadership. Oh, and his play on the field was pretty great too. But finding a quality quarterback in the NFL is tough for most. Especially when you don’t take one until the fourth round.

And that’s the beauty of a Dak Prescott or Dennis Smith being the young leader of your franchise.  No matter where you take these guys, or what expectations are put on them, you trust that their high character will help them maximize that god given stuff. And This is why Mavs and Cowboys fans should be so excited. Because while their teams leaders are young, they seem wise beyond their years.