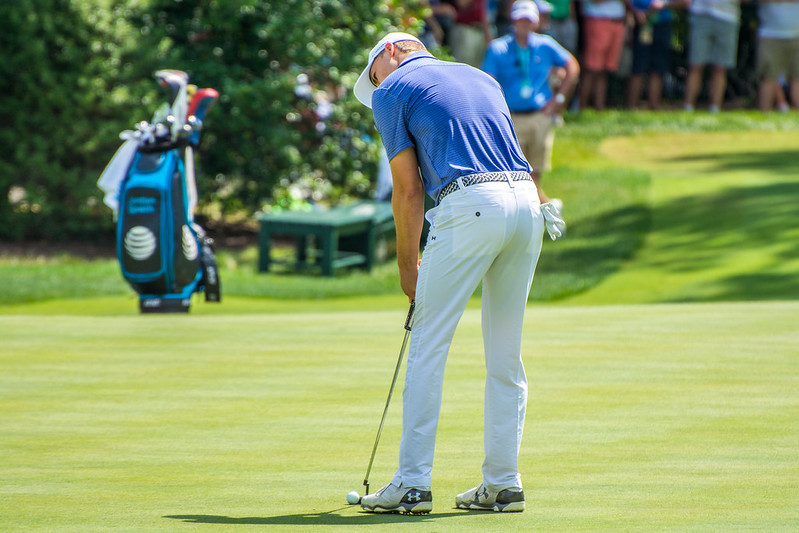 It’s the middle of May and that means it’s Byron Nelson time in North Texas.  This year, the pros will be teeing it up at a new venue, TPC Craig Ranch in McKinney.  Coming just a week before the year’s second major championship, this year’s field is stacked with the world’s best.  These names include defending champion Sung Kang, Jordan Spieth, Brooks Koepka, Rickie Fowler, Sergio Garcia, Hideki Matsuyama, Bryson DeChambeau, Jon Rahm, Jason Day, Scottie Scheffler and Will Zalatoris.

After a lackluster event at Trinity Forest, the venue was moved way north to TPC Craig Ranch, where expectations are high.  The course itself is part of the TPC network and has a great reputation locally.  The course has highlighted its final three holes with viewing venues for the limited crowd allowed onto the grounds this week.  The PGA Tour remains on the forefront of returning fans to venues across the board (while adhering to COVID protocols, of course) and it has certainly brought the energy back to the game.  I think it’s safe to say that we all missed that energy.  Even the “BA BA BOOEY’s” have a strange endearing nature that I would never have expected.

TPC Craig Ranch will display its first four day tournament and expectations are high.  A venue that is set up properly to both defend itself and give the opportunity for dramatics is essential to keeping a tournament around for awhile.  I’m confident the players will come out of this impressed and looking forward to coming back again and again.  Long has the Nelson struggled for big names outside of the locals and this year serves as a true test to what North Texas can bring players across the board.  My expectations are high and I’m confident the course will hold up over four long May days.

The AT&T Byron Nelson is a premier PGA TOUR event, hosted by the Salesmanship Club of Dallas since 1968.  Byron Nelson himself was a legend of the game.  The Waxahachie native has an impressive 52 PGA Tour wins including five major championships.  Before his death in 2006, Nelson was a regularly attendee of the tournament and could be seen congratulating the winner on the 18th green.

Now that we’ve talked about the venue and how excited we are to see how things play out, let’s get to the players.

Like I mentioned above, this field is healthy.  A last minute DJ withdrawal didn’t feel like such a drastic loss when we have other top professionals making their way to McKinney.  But, as always, we will zone in on those whose hometown area codes resemble that of the 75070.

Jon Rahm is the favorite at 8/1 but Dallas native Jordan Spieth sits firmly near the top of the list at 10/1.  Spieth is looking to keep his pursuit of the Texas Swing alive after securing his first victory in three years in San Antonio earlier this year.  Spieth hasn’t played since the Masters but his game has looked nothing less than stellar since the start of the 2021 campaign.  Next week marks the only major the kid hasn’t won so you know he’ll be looking for another solid week in the build up to the Ocean Course.

Recently, on the No Laying Up podcast, Spieth talked about his mental state and process.  As always, he was candid and in depth when talking about how he got through some tough years on the golf course.  It’s obvious at this point that you’ll never hear me speak ill of this dude and for good reason.  He’s one of the best in the world when he’s on his game and right now… he is.

Another Texas guy.  Literally, he went to UT.  Scottie is 22/1 to win this week and will certainly be a popular pick due to that value and his almost Spieth like vibes when it comes to fanfare in the Texas galleries.  The 24-year-old first played here at age 17, posting 60’s in 3/4 rounds and finishing for a tie for 22nd.  There’s plenty of big names to root for this week but the Byron has always been a place for first time winners and it wouldn’t surprise me if that first timer’s name is Scottie.  He’s got the game, the familiarity with the course and the staff and has been right on the cusp of breaking through.

He’s from Texas, he’s a top player in the world, he’s got an awesome shoe game.  That’s reason enough to put him in your Daily Fantasy lineups.

Is it me or is no one talking about this kid anymore?  He absolutely stole the headlines at the Masters after a charge no one expected.  He’s technically not on the PGA Tour but he damn well should be.  It’s a shame we’re going another week where the person who finished in the top 5 at the Masters is ineligible for FedEx Cup Points but what can you do?

The Bryon should be an interesting even this year.  A new venue, some weather threats and a stacked field has me more excited than ever to tune into the event.  It’s wild that it’s already May and we’re talking Byron but here we are.  So strap in and watch the world’s best figure out how to tear this North Dallas course to shreds.