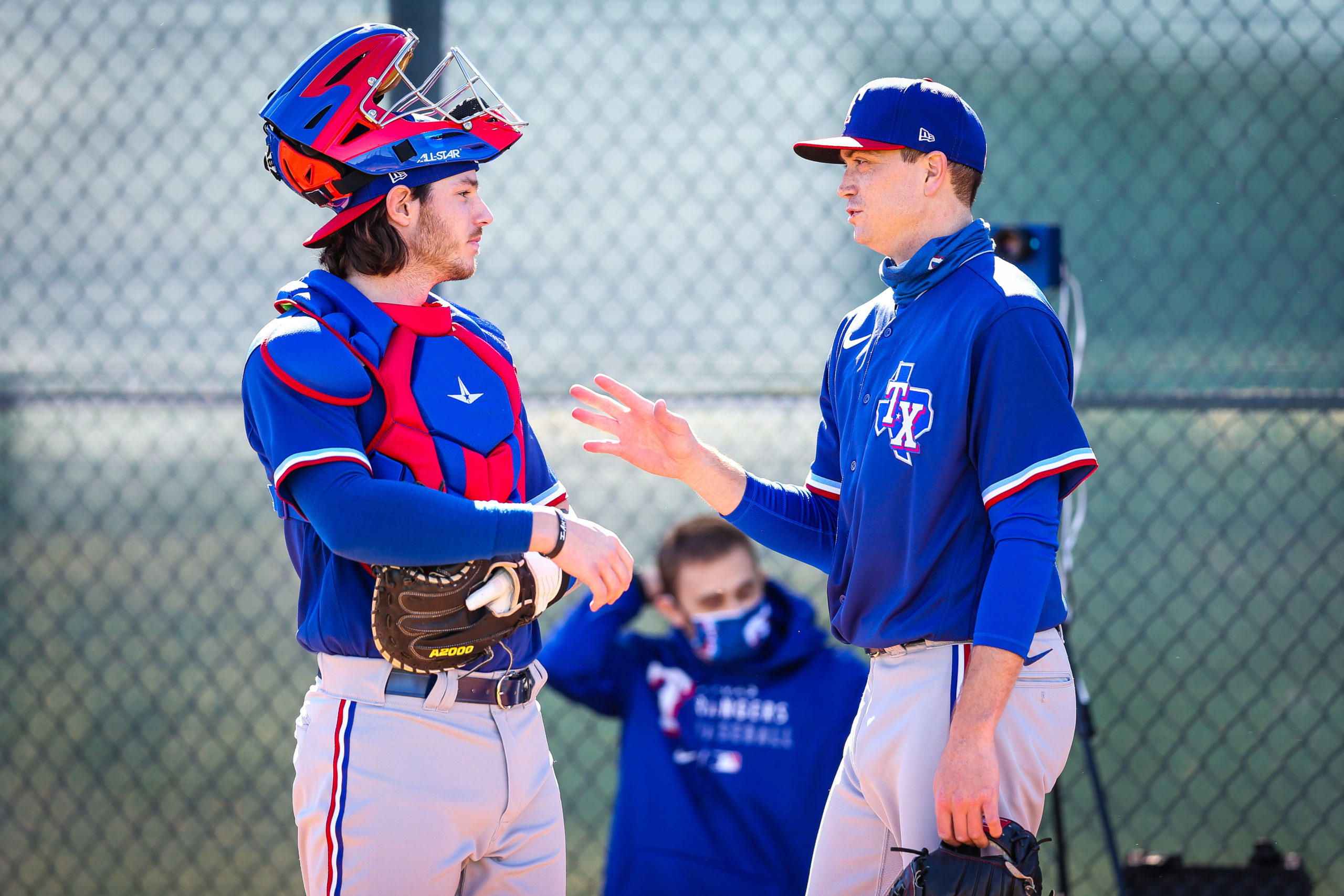 The Rangers catchers the best defensive duo in MLB? The stats say yes

The Rangers catchers the best defensive duo in MLB? The stats say yes

When you recruit a catcher, what exactly are you looking for?

A catcher that can hit and is subpar defensively, or a catcher that can call the game smoothly behind the plate, steal strikes, and show off strong on defense? While, yes, having an offensive machine as your catcher is a coveted player, a catcher is a position crucial to the game of baseball that sacrificing defense won’t cut it. To claim who the best catching core in Major League Baseball is arbitrary, depending on what views as more vital than the other. However, the combination of Jose Trevino and Jonah Heim tops Major League Baseball in pitch framing, defensive WAR, and defensive runs saved. So yes, there’s evidence to back up that the Rangers hold one of the best catching cores in 2021.

P.S., according to StatCast's framing metrics, @HipHipJose5 & Jonah Heim are 1-2 in majors at getting calls for their pitchers this year. Impressive work they've done to help staff.

“We bounce ideas off each other,” Jose Trevino told me. “Not a lot of people see what we do. Every first game of the series, we’re out there blocking, receiving. If we got to throw, we throw. If there’s anything we need to address, we address.” The two best catchers at framing pitches, Jose Trevino and Jonah Heim. Baseball Savant has Trevino leading all MLB catchers in runs extra strikes (4), which converts strikes to runs saves and adjusts based on park and pitcher. Second, Jonah Heim is tied with two other catchers (3) but holds the tiebreaker due to strike rate. The Rangers have a heavenly hold on MLB on overall framing at 6.3; the following best is Oakland and Milwaukee, both at 2.2.

Rangers Jonah Heim demonstrates the value of a one handed sweep tag. Much quicker & more range than a two handed tag. pic.twitter.com/wZ9tuk5vWy

What does all this mean? Well, it means the Rangers frame better than anybody in baseball by a landslide. “Our catchers work hard at catching the baseball and at giving the umpire the best look where the pitch finishes up,” Kyle Gibson said. “It’s not by accident.”

It’s not just framing. The Rangers have a defensive value of 11.0, 3.3 higher than next on the list, the Brewers. The six defensive runs saved by Rangers catchers also caps most in the league. “They work so hard whether it’s blocking, catching the ball, calling the game,” Gibson said. “I’d like to see what other catchers are doing to work this hard in between starts and in between games.

“It’s been fun to see that, two young catchers that have great big league careers ahead of them,” Rangers General Manager Chris Young told me. Young sat in a catcher’s meeting on Friday with Heim and Trevino (and John Hicks). Chris said in the discussion they talked about pitching, making the pitchers better, what the pitchers are doing well, the strengths, and improvements. “It gets me excited [about] the potential behind the plate,” Young told me. “Just hearing the dialogue between the three in this meeting and the relationship, the detail and focus were awesome.” Remember, Chris Young has worked with catchers like Sandy Alomar Jr, Salvador Perez, and Mike Piazza.

Adolis Garcia (@AdolisJose) Fields the single from Trey Mancini in Right field and throws an incredible ball to Jose Trevino (@HipHipJose5) to get Maikel Franco out at home and preserve the 0-0 Tie for the Rangers in the Top of the 10th pic.twitter.com/ft3Si2Itfj

With many four-game series and consecutive games, Jonah Heim is seeing a lot more workload than starting the 2021 season. Jonah, in the meantime, has come clutch a few times in May. His month of May includes a game-tying homer in Minnesota and a go-ahead hit against the Mariners. “I’m just going out there and enjoying every second and having a blast,” Heim said. You’d think it’s a competition to earn the number one spot on the depth chart, and while everyone wants playing time, both Jose and Jonah are also each other’s biggest fans while picking each other’s minds.

“They talk all the time,” Woodward told me. “[Trevino and Heim] talk together about game plans, and they’re the first one to root for the other when one’s playing. They have a little bond on the catching front.”

The Rangers catching depth is deep. Sam Huff is still recovering from surgery, but he’s also waiting in the works. Do the Rangers have the best catching duo in baseball? I’d say in the Majors. The numbers don’t lie. If we are taking this from a defensive and catcher role perspective, I’d say yes. The Rangers see it, and a veteran like Kyle Gibson sees it. “I don’t know where we’d be without them,” Kyle said. “Rarely do you get a duo like this that defensively impacts the game so much.” Maybe Heim BBQ will come up with a Jonah Jose dish sooner or later.

Volume up to hear the best fans in @MLB @Rangers @JGutierrezz0 🎥 pic.twitter.com/QI23ag7Jrz