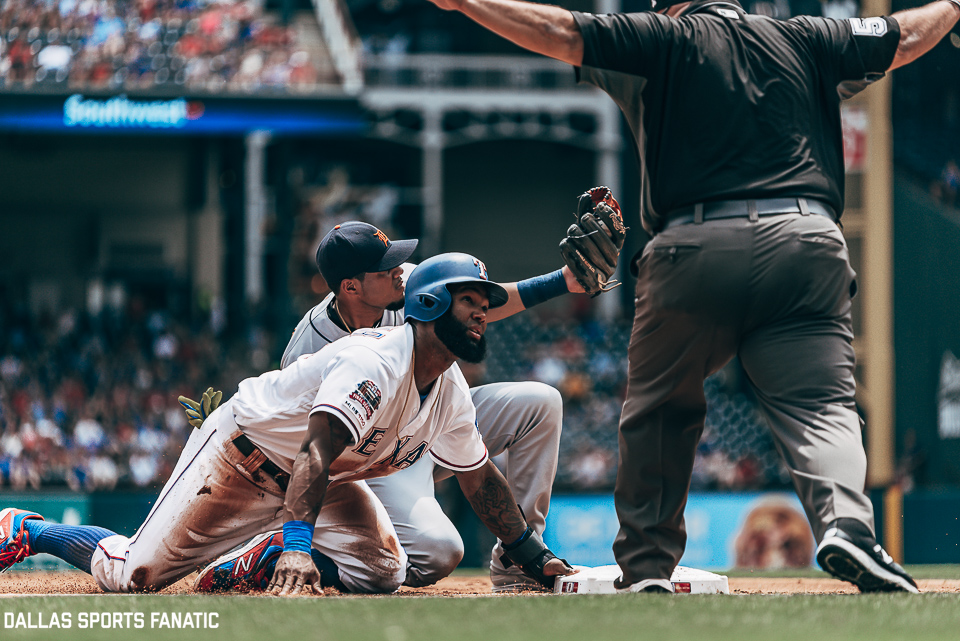 The Texas Rangers wrap up a week where they went 1-7 bringing their total record to 60-64. It was one of those weeks, Ranger fans.

It all began on Monday across the northern border in Toronto, Canada. The three-game series against the Blue Jays started off sluggish dropping the first two, but the Rangers were able to bounce back in the final game to avoid the sweep. After a long trip back to Arlington on Thursday, the Rangers then had a four-game set against the Minnesota Twins that I’m sure the club wish they could have back. They were swept while allowing a combined 35 runs. If you include both series from the week, the team allowed a total of 60 runs over those seven games.

On another note, it was an exciting day on Saturday as the Rangers organization inducted two new members into the team’s Hall of Fame: former Arlington Mayor Richard Greene and some outfielder by the name of Josh Hamilton. Not sure if you’ve ever heard of him. Richard Greene was notable for being the man to bring Globe Life Park into existence while also keeping the Rangers in the city of Arlington. It was only appropriate that he get honored in the stadium’s final season as the home of the Rangers. As for Josh Hamilton, well, he doesn’t require much explanation, right?

People forget how good Josh Hamilton was. Easily the most talented player to ever play for the Texas Rangers. Don’t @ me.

The Rundown: Believe it or not, Nomar Mazara kicked off the scoring in this one with a solo shot to center, 110mph off the bat. It was the bottom of the second where the madness started, though. Every player contributed a hit for 21 total on the night including home runs by Smoak, Grichuk, Jansen and a Drury grand slam in the fourth inning. Willie Calhoun and Rougned Odor added a couple more solo shots and boy did Rougie enjoy his slow trot around the bases in Toronto. Jeff Mathis closed out the game on the mound making his fifth appearance this year.

Player of the Game: Rougned Odor, because he loves playing in Toronto.

The Rundown: This day marked the fourth time all year that the Rangers were shutout. It was a solid pitching matchup from both sides as Lance Lynn went five innings allowing four hits and one earned run. Toronto used an opener before their starter came in and it worked to their advantage. Between their five pitchers used, they allowed a combined five hits and zero runs. Wish the Rangers pitching staff could get a performance even close to that. Toronto’s three runs were three solo shots

Player of the Game: Delino DeShields for his scary, yet amazing catch to get out of a bases-loaded jam.

The Rundown: The Rangers got a win! Hope you all enjoyed it while you could. Danny Santana had a solo shot to seal the game in the eighth inning to give him 19 on the year. Nomar Mazara also had another solo shot but on the defensive end, he had a smooth diving catch to rob Vladimir Guerrero Jr. On the Blue Jays side, Bo Bichette continues his dominance at the shortstop position after making great plays ever since he was called up. The Jays certainly have a bright future ahead of them with their young core of Bichette, Biggio and Vlad Jr. Who really cares though – we’re all just happy the Rangers won.

The Rundown: The Rangers welcomed the Twins to town, but they wish they would’ve left their bats at home. Especially starting pitcher, Pedro Payano, who allowed five hits, five earned runs and three walks in his fourth start this year. It took five innings for the Rangers to finally get on the board with a solo shot by Willie Calhoun. Hunter Pence adds another solo home run in the sixth inning, which happened to be a wild one. The bats came out hot this inning, but somehow, someway, all three of the outs this inning came on poor base-running. Calhoun was called out at the plate, Odor was caught in a pickle between third and home and Jose Trevino was caught rounding third. All outs came between third base and home plate in the inning. I don’t believe I’ve ever seen that happen. That and two errors by Forsythe at third pretty much sums up this game.

Player of the Game: Willie Calhoun as he started the spark in the Rangers offense and carried the momentum, although it was too much to come back from.

The Rundown: The savior, Mike Minor was on the mound with the third-best ERA in the AL at the time at 2.90. Minnesota’s Kepler hit a solo shot in the top of the fourth to end Mike Minor’s 19-inning scoreless streak; the third-longest by a starting pitcher in the MLB this year. Schoop hit a go-ahead two-run home run in the seventh to put the Twins up 4-3. The Nomar Mazara-led Rangers offense wasn’t enough to make the comeback in the ninth, though. With two men on, the former Twin, Danny Santana, grounded out to end the ballgame.

Player of the Game: Nomar Mazara, the double/solo home run king of the Rangers. He went 3-4 with two RBIs on a scorching hot evening.

The Rundown: The most exciting game of the week came on Saturday as the Rangers organization honored their newest additions to their Hall of Fame. Ariel Jurado didn’t really even give the Rangers a chance as the Twins opened up the game with six runs in the first and two in the second. Danny Santana was trying to carry the team by himself as he smacked a home run in the first and second innings. At that point, I thought, could he have a four home run game on the day we honor Josh Hamilton? While that would’ve been fun, it certainly didn’t happen. He stopped there with the excitement and finished the night 2-5 with four RBIs. On the pitching side of things, Ian Gibaut made his Rangers debut with a solid outing in relief of Jurado. He quieted the Twins hot bats with three strikeouts zero earned runs in two innings of work.

Player of the Game: Josh Hamilton, not only because we miss his talent, but man, was his speech fantastic. Giving God all the glory for his life and his career.

The Rundown: A couple of familiar faces hit the mound for the Twins on this day: Old friends, Martin Perez, and Sam Dyson. They both didn’t have great outings, though, as they were the reason for all three of the Rangers runs. A guy by the name of Jeff Mathis had a two-run single in the fourth to put the Rangers on the board. Shin-Soo Choo hit his 20th homer of the season in the seventh to tie the game at three. In the eighth, the Twins got hot – yes, hotter than Emmanuel Clase’s fastball. Clase gave up three earned runs on a bases-clearing triple by Jorge Polanco. That sealed the game and the series sweep for the Minnesota Twinkies.

Player of the Game: Jeff Mathis, for his two-RBI single. That’s big for him and his bat.

A Look Ahead: The double-header on Tuesday will be a long, hot day. The 1:05 first pitch is a make-up for the game missed back on July 1st, due to Tyler Skaggs’ death. Mike Trout and the Angels make their final trip ever to Globe Life Park for this four-game set of lefties.

The Rangers continue their heavy use of call-ups from the minors by adding Brock Burke to the mix of starting pitchers. He’s currently ranked as the #7 prospect in the Rangers farm system and will be the 12th pitcher to make his MLB debut this year. Kolby Allard makes his third career start for the Rangers after being the youngest pitcher (22 years, 1 day) to record a win since Martin Perez (21 years, 87 days) did it back in June of 2012. This string of lefties over this series looks to bring pitching back to Arlington and make a case for themselves as three of them are just getting their careers started.

A Look Ahead: The Chicago White Sox (55-68) are one of the many teams to be considered “tanking” in the AL. They are at the bottom of the league’s standings and find themselves in the bottom half of the league in just about every statistical category there is. There are only seven teams in the entire MLB who have a worse record than the White Sox from Chicago. However, you can’t discount the amazing play from Tim Anderson, who’s currently batting .330 and the likes of their two All-Stars: 1B Jose Abreu and SP Lucas Giolito. However, the Rangers should miss him as he pitched the night before the series opener. Good thing.

Have a great week, ladies and gentlemen and stay cool out there. @darienclark5 signing off.