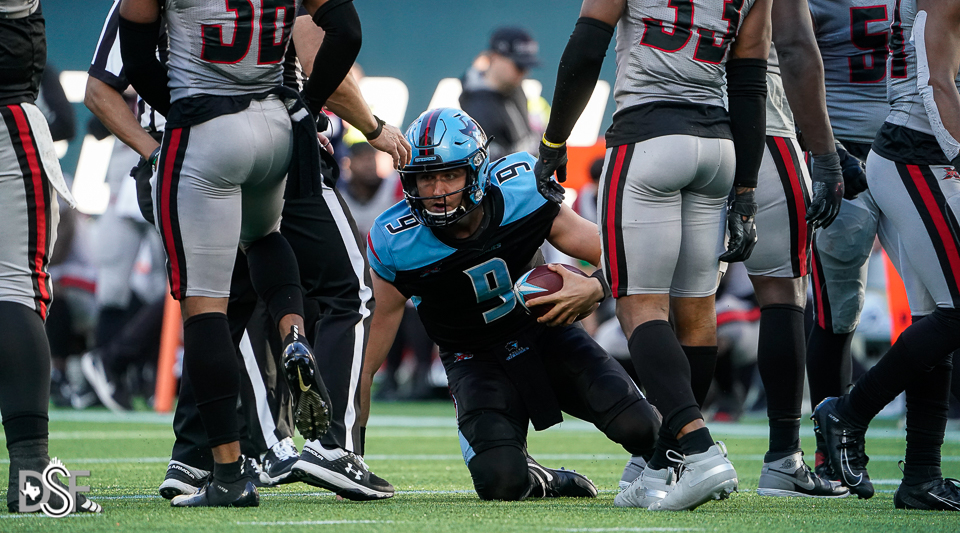 The Renegades came into Saturday’s game winless at home while New York entered the contest winless on the road. Both teams went with quarterback changes before the game as Phillip Nelson got the start for Dallas due to the injured Landy Jones and Luis Perez, the Texas A&M Commerce alum, took the start over former Oakland Raider, Matt McGloin, for the Guardians. The first half had an expected feel to it, but New York’s three phases outlasted Dallas in the third as the Guardians broke away 30-12.

The Renegades offense continued its scuffle with three turnovers (one resulting in a Ryan Mueller pick-six). Dallas’ turnover total extended to fifteen, which remains the top in the XFL in addition to another -2 in turnover margin (-9 for the season). Nelson finished the day 27 for 46 for 204 yards and the two picks. “We just as an offense have to execute better, I have to execute better.” Phillips Nelson said after the game. A Dallas’ offense that heavily weighed on the running game ran for fifty total yards, half of the team’s season average. I asked Renegades head coach Bob Stoops about Phillip Nelson’s performance. “I thought Phillip did a really good job overall for what we are asking him to do. He managed the game well.” Stoops finished up by saying, “A quarterback cannot do it by himself.”

Meanwhile, the defense (a strong suit) allowed 375 yards to a New York club that averaged 230 yards a game coming into the contest. Luis Perez, who took over last week in the win over Los Angeles, threw for 229 yards and an eighty-yard touchdown to Colby Pearson in what was a third quarter dominated by the Guardians. The third quarter also included a pick-six and an eight-play, 76-yard drive by New York.

Dallas answered with a kickoff return for a touchdown by Austin Walter. Walter talked after the game about the kick return. “We were working on that all week. I knew with the scheme, it was going to hit. Everything just came together. My teammates did their part, and it was up to me to finish it.” In the third quarter, a fight broke out after a Josh Hawkins interception. Both teams lost a player due to an ejection.

The good – Josh Hawkins' pick sets Dallas at their own 26.
The bad – It's still 12-6 NY with 6:31 left in the 3rd
The Ugly – Jarron Jones is ejected for New York, and Gerald Rivers is ejected for Dallas. Ian Silberman also got tagged for a personal foul flag but he's still in.

In the last two games, Dallas’s defense allowed 57 points compared to just 45 points allowed in the previous three games. The Renegades look to snap a two-game losing streak next Sunday when the team travels to the nation’s capital. Dallas will square off against the Washington DC Defenders at 3 pm on FS1. Despite the poor play at home, Dallas will look to remain undefeated on the road.