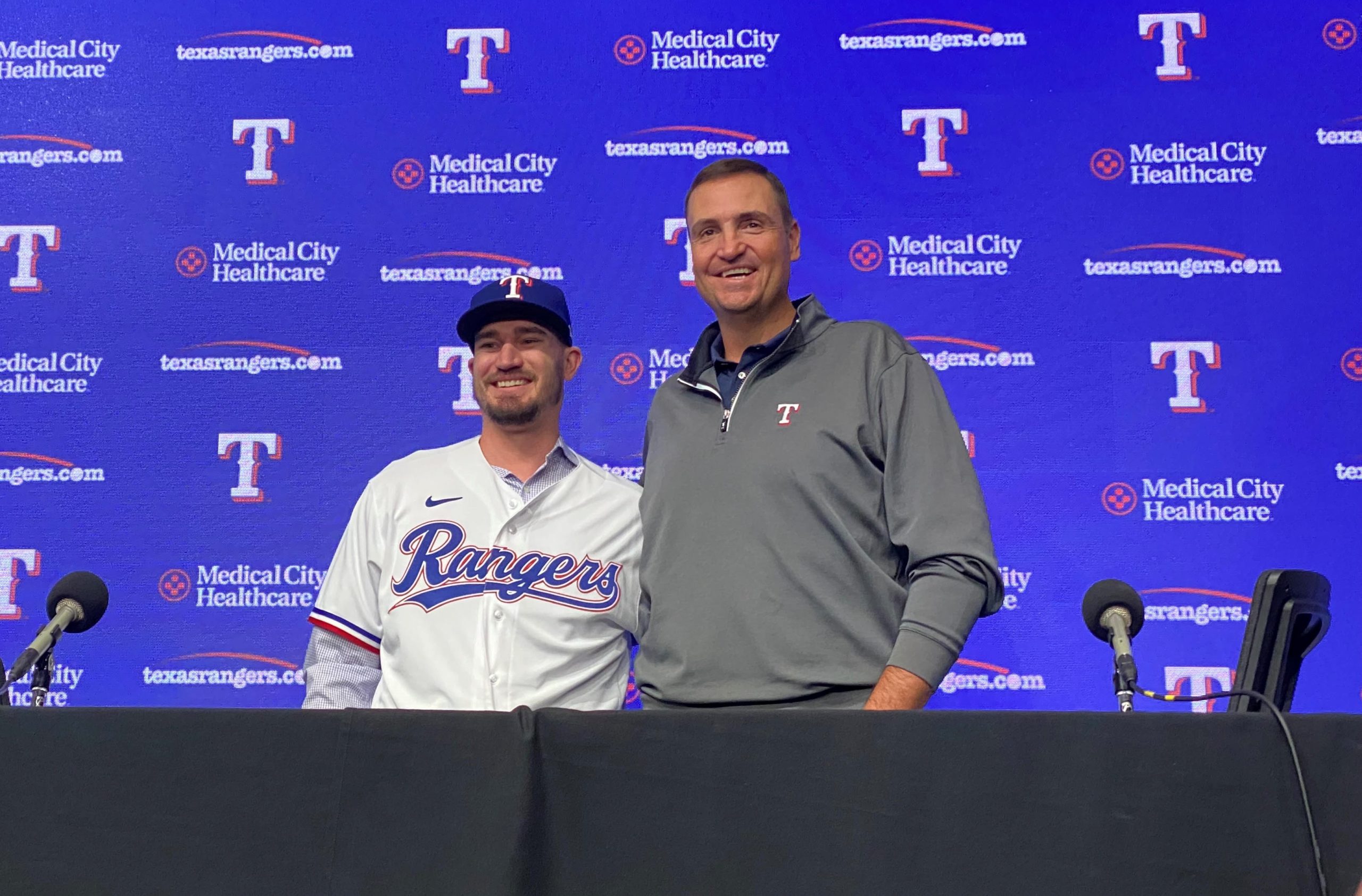 The Rangers have made their Christmas list, and sure it came early with a few items Santa couldn’t bring, but boy, did Mr. Claus deliver in the starting pitching department. Texas celebrated the arrivals of both Jacob deGrom and Andrew Heaney with other minor moves made. The question sets how active the Rangers will be in the market in the next two months and how satisfied the club is with their current roster. Santa’s list still needs to be completed, but here are some items that Santa may deliver late to the franchise looking to make its first postseason run in six years.

The Rangers have depth in their outfield, and the question leans on what Leody Taveras does in camp. Taveras should be the Rangers’ primary center fielder if he performs well enough in spring training. Taveras started last season on a tear once he was called up several weeks into 2022, then cooled off as the season concluded (he hit .231 in the second half after hitting .341 until the All-Star break). Texas has other options, including Eli White and Bubba Thompson in center field, all with elite speed. Once the club decides on center field, the following query is left field. You can throw in the other two names I mentioned (assuming Leody has a good camp), sign a free agent (most pointing to Michael Conforto), make a trade to upgrade more, or if someone like Josh Smith or Ezequiel Duran takes the world by storm, get them used to the corner outfield. Remember, Josh Smith played twenty-one games in left field in 2022. With that said,  the Rangers ranked last in MLB with a .508 OPS among their left-fielders last season(the only team with a combined batting average below .200).

The Rangers are actively pursuing external options, but not at the desperation level compared to how they navigated the starting pitching market. Duran, Smith, and Thompson made their big league debuts in 2022 and received limited playing time. Yes, player development can take time, but when signing a free agent, there’s always that risk that the environment doesn’t work. I see Brad Miller getting pinch-hitting reps providing a left-handed bat (starting against pitchers who are deadly against righties), so Texas has the tools in their current system, but the players aren’t flushed out yet.

Leody Taveras gives the Rangers a 2-1 lead in the fifth with a moonblast home run to right field, his fifth home run of the season

Right now, the closer’s role is between José Leclerc and Jonathan Hernández. Leclerc finished the 2022 season as the closer once interim manager Tony Beasley eased Hernández out of the role. Once Hernández left the closer role, he posted a 2.25 ERA in twelve innings pitched with six walks mixed in. Some late-inning relievers are available in the market, like Craig Kimbrel, but I want to see Jonathan tear up Spring Training and earn the closer role. His heavy sinker and nasty slider have the potential to be a one-two punch that makes him a beast in the ninth. Leclerc can be an excellent eighth-inning option with his power fastball, and of course, manager Bruce Bochy may mix it up depending on the opposition’s lineup late in the game.

As for other relievers, the Rangers have a boatload of long left-handed relievers (John King, Taylor Hearn, Cole Ragans, and Brock Burke). Will their roles shift to a Brett Martin-like where they can do one inning on back-to-back days? King had one instance in 2022 where he went on back-to-back days, Burke had one occurrence, and Taylor didn’t pitch back-to-back days in the Majors when he moved to the bullpen. The Rangers would not convert Cole Ragans to a long reliever if he doesn’t make the club; they may start him in Triple-A Round Rock if he doesn’t make that fifth starting spot. Texas has a few question marks in that last rotation spot where the odd guys out may move to the bullpen or start in the minor leagues (a second place between Jake Odorizzi, Dane Dunning, or Glenn Otto) may make the club as a right-handed long reliever. Still, only two out of the group make the team.

Another good pitch I saw yesterday was Jonathan Hernández's CH. 90mph with 19+ inches of horz movement with only 5 inches of lift. The model likes the shape too at 131. When he locates it well, which he's done in the past, its absolutely lethal. pic.twitter.com/WqqrUxBxOX

I’m curious how the Rangers handle guys like Smith, Duran, and Mark Mathias. All three don’t have a set position and could receive the Danny Santana/Nick Solak treatment of playing wherever the club needs them that day. The third base backup becomes intriguing because Josh Jung came off an injury last season and played half a month in the big leagues. Therefore, I’d like to know if Josh is durable enough to play every day at third (the offseason rest likely benefits him the most). Backup first base, though limited with Nathaniel Lowe knocking on the shadows of Marcus Semien in terms of being an Iron Man, could point to Sam Huff if he receives a spot on the roster. With all four guys hopefully healthy, shortstop/second base on Corey Seager’s days off and third base may only be the backup spots needed. The Rangers have the infield triple covered like a good neighbor when it comes to depth.

From a roster depth side, Mitch Garver looks good to go by Spring Training and Opening Day, Jon Gray should be healthy and ready, Jacob deGrom says he feels as good as he has in any offseason, and Eli White is coming back. The Rangers don’t have to make any moves, but if the opportunity presents itself, go for it. Stay warm, and have a Merry Christmas.