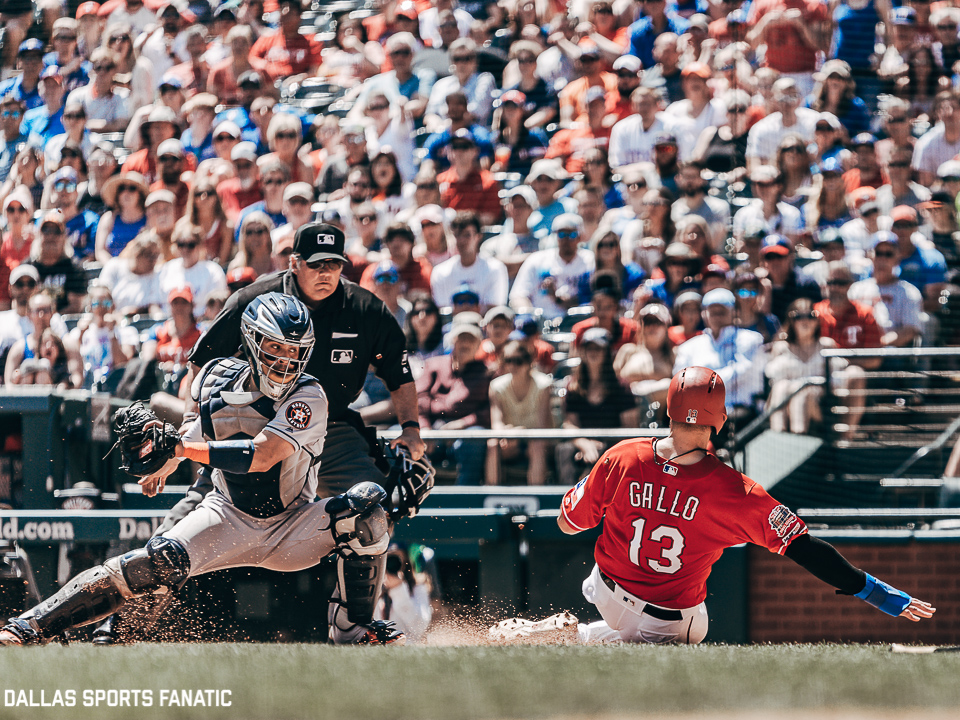 Ranger fans are anticipating the start of the season and by the looks at camp things are going well. Monday had a few scares with injuries to Robinson Chirinos and Willie Calhoun, but Chirinos is getting further evaluated with some time to recover and Willie’s hip seems more precautionary. There’s a couple of players that still have questions around them as to if they’ll be regular season ready especially with delays and lack of access due to the pandemic.

On Friday, Gallo cleared health protocols and arrived at Globe Life Field. Monday was Gallo’s first appearance during summer camp. Joey popped up the other way and struck out twice in Monday’s three in-game at-bats. In the past few months, Joey and other teammates had the opportunity to work out at Globe Life Field and Gallo mentioned on Saturday how vital it was. “The workout helped me a lot. We were training four/five days so the two weeks off from coming to the field and training; it didn’t affect me as much physically because I was in such good shape.”

Should fans show concern about Joey? I think they should give him a few more days to evaluate where he is right now. The fact that his timing is off right now is understandable. I asked Woody on Saturday if Joey Gallo will be in tip-top shape for Opening Day, “I know timing wise at the plate, it’s going to be tough for everybody. We are going to do the best we can to give him [the most at-bats] without risking injury and the beautiful thing is we can do that.” Remember that last season in March Gallo’s Spring Training got cut due to a groin injury.

Joey Gallo first AB ends in a high, and I mean HIGH pop up. After one inning it’s the Bergs 1, the Hayes 0. #Rangers pic.twitter.com/mUbu0E3CFl

Guzman got a late start to Summer Camp due to complications. He wasn’t cleared to workout with the team until July 8th, five days after camp began. In Monday’s game, Chris Woodward saw a better trend from Ronald Guzman, “Guzy took some good swings, didn’t have much to show. He’s getting his “A” swing off, that’s kind of what I am looking for.” The concern with Guzman is the success of his brethren around him. Todd Fraizer got his first work at first base on Monday and add that to Isiah Kiner-Falefa’s dominant camp equals to more competition at first base for Guzman.

Roster changes make it become difficult to add a guy like Greg Bird to the forty man roster. However, if Isiah’s success continues and Fraizer gets more work at first base, Guzman could see limited playing time. Players may not get the same leeway they normally would get if they’re struggling and it’ll be curious to see what happens when a hitter is having good at-bats with no results. The next two months are crucial for Guzman as a potential starter even for next season.

Jordan Lyles slots as the fifth starter in the Rangers rotation and the starter who couldn’t get as much work in during the pandemic. Lyles hasn’t been as sharp in his two Summer Camp outings, but the club isn’t worried about it. “Watching [Lyles] pitch [Saturday] at the end, I liked what I saw. It’s unfair to say anybody is behind at this point,” Chris Woodward said after Saturday’s intrasquad game. Lyles struggled during Spring Training in March and had a rough few months with Pittsburgh. Lyles finished the 2019 season on an excellent note once he joined the Brewers.

The question for the club entering the season could be if Lyles starts off as a long reliever. For the first nine games of the 2020 season, the Rangers have three off days mixed in. If Texas wanted to, they could implement a four man rotation for the first two weeks and start Lyles on August 8th against the Angels.

Jordan Lyles pitching for the #Ranger today. A lot of excitement by how he ended last season. Final 11 starts: 2.45 ERA, .202 BA. Overall, his 9.32 K/9 was best of his career. One big change was a higher reliance on his high-spin 4FB.

The park on Monday used fake crowd noise with PA Chuck Morgan on the microphone and walk up music going on. For the first time attending an intrasquad game, it felt somewhat normal (somewhat). All I can say is buckle up, ladies and gentleman, it is going to be a wild and crazy ride through the dog days of summer.