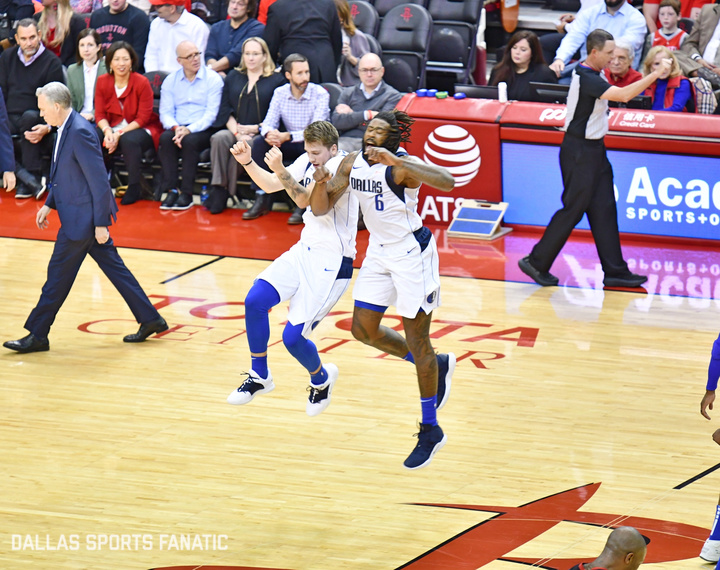 Three takeaways from a convincing Mavs road win over the Rockets

Three takeaways from a convincing Mavs road win over the Rockets

The Mavericks entered Wednesday night’s game against the Houston Rockets with a huge opportunity,  At 9-9 on the season, Dallas had a chance to creep over the .500 mark more than three games into the season for the first time since the end of the 2015-2016 season when they finished 42-40.

Luka Doncic, Devin Harris and the rest of the Mavericks leaped on that opportunity as they rode several big time runs to help them win 128-108 over the Rockets.  Here are the three biggest takeaways from the team’s second road win of the season:

The Mavericks bench won this game
Dallas led this game by 21 points early in the third quarter, but the starting lineup began to falter and let the Rockets back into the game.  Houston would eventually get the lead down to just five points at 94-89 with under a minute left in the third quarter. However, the Mavericks would respond with a 15-2 run with a lineup consisting of J.J. Barea, Devin Harris, Dorian Finney-Smith, Maxi Kleber and Dwight Powell.

The Dallas bench outscored Houston’s by a convincing mark of 61-25.  The “Ol’ Reliable” backcourt of Harris and Barea combined for an impressive 33 points in 33 minutes combined minutes played.  Harris shot 6-8 from the field overall and 5-6 from deep.  Following his strong performance Saturday, the veteran point guard is really starting to find his legs after missing over a month with an injury sustained on opening night.

Offensive rebounds could have cost the Mavs the game
When the Rockets were working their way back into the game in the second and third quarters, offensive rebounds almost allowed them to completely climb all the way back.  Houston narrowly won the rebounding battle tonight at 38-37, but edged Dallas on the offensive glass at 15-10.

DeAndre Jordan played just 24 minutes in the game, Harrison Barnes and Dennis Smith Jr. were the only starters to really play in the 4th quarter, and it seemed to be one of his worst games in a Mavericks uniform.  He offered virtually no resistance to Clint Capela at the rim and he only finished with 7 total rebounds. The Mavericks simply need more from him than his borderline empty stats suggest they’re getting.

HALLELUKA!!!!
One can already confidently say that you can expect at least one “Oh my!” moment from Luka Doncic every game.  Wednesday night in Houston might have been a performance worthy of its own “Top Five Luka Moments.”  Here are some of the nominees in chronological order:

We’ve got ourselves a good one, folks.  Doncic finished with 20 points and more or less didn’t play in the fourth quarter.  He took a couple hard bumps and even had to leave the game to get a cut on his cheek cleaned up, but it was still one of the most unforgettable nights for the rookie so far.

Bonus: After missing Saturday’s home win against Boston, Dennis Smith Jr. was back in the lineup for Dallas.  A stat line of 10/5/5 isn’t going to jump out at anyone, but there was no shortage of great moments for the second year guard.  A couple big-time slams and blocks showed exactly the type of results his athleticism is always capable of producing.  He still has a long way to go in finding his way in this new Doncic-led system, but his willingness to find his teammates and not need a ton of his own shots is definitely encouraging… Dwight Powell also returned from injury in this game and also had some major contributions to the win with a less than stellar statline.  With only 6 points and 3 rebounds, Powell’s mere presence and hustle in the lineup of himself/Kleber/Finney-Smith/Harris/Barea was a key driving force to the run that put the game away for Dallas… Up next for the 10-9 Mavericks?  Another meeting with LeBron James in La La Land.  Tip-off from the Staples Center will be just after 9:30 on Friday night.