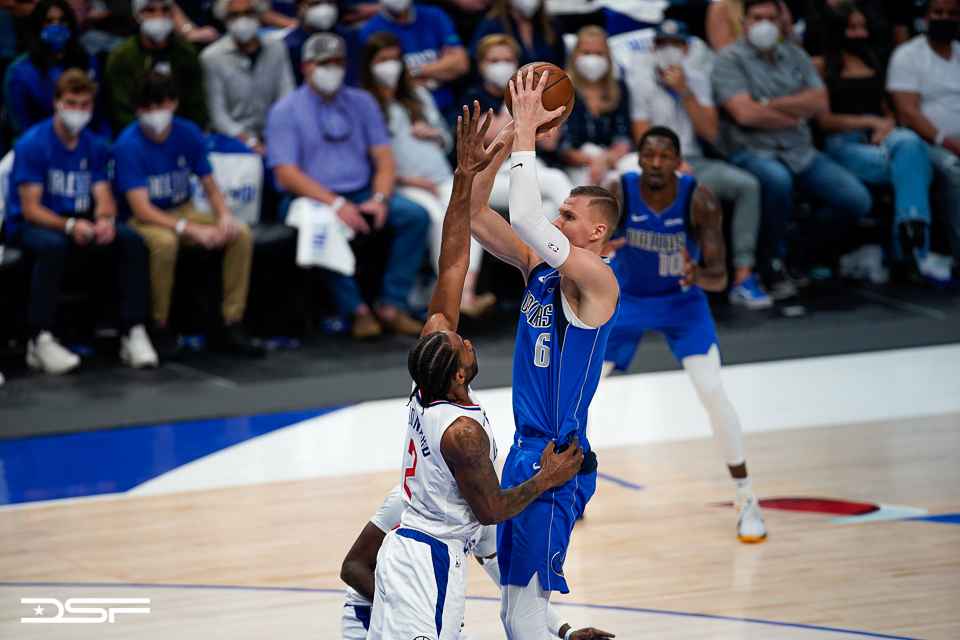 Do whatever it takes to limit the damage of Kawhi Leonard (and to a lesser extent, Paul George)
Leonard’s 45 points on an insane shooting line of 18/25 on Friday night simply isn’t going to get it done if the Mavericks want to win this series. The Dallas defense had no answer for Leonard as he annihilated them with mid-range jumper and mid-range jumper and then an occasional flash of dominance in the paint. Leonard only shot four free throws in Friday’s game and Tim Hardaway Jr. was the only Maverick to pick up at least four fouls, so maybe Dallas will need to try to see how physical the referees will allow them to play Kawhi in a game seven. Just as long as you foul him hard enough to keep him from getting those insane continuation calls when he drives to the basket.

At least look at Kristaps Porzingis for help on offense
Yes, I’m aware this is a two-way street. Porzingis absolutely has to do more with the opportunities given to him and he wasn’t doing that when he was more featured early on in the series. That said, the way he was completely ignored in Dallas’ offense in game six Friday is not going to win them any games. If he’s available, you have to look for him every once and a while. I’m not talking about post-ups, I’m talking about pick-and-rolls or just even looking his way whenever he has plenty of space on the three point line.

Players who took more shots than Porzingis’ seven in game six include Boban Marjanovic with 13 and Jalen Brunson/Dorian Finney-Smith with eight. We’re not asking for Porzingis to get 20 shot attempts because that’s just going to take away from Luka can do at his star level, but Doncic needs to keep an eye out for his 7’3 partner on offense if this team wants to come out with a win today. KP has been more and more active on defense as the series has moved on. He’s come to terms with the fact that he won’t be a star against this Clippers team. Reward him with a few more looks.

“The Other Guys” need to step up
It’s become pretty clear that the Mavericks sink or swim based on whether or not their role players are feeling it on any given night. Tim Hardaway Jr. played well on Friday night, but that was about it for the supporting cast. Finney-Smith had a strong shooting second half, but he still missed key open three’s in the fourth quarter. Maxi Kleber brought virtually nothing to the table throughout his 21 minutes. Jalen Brunson did not play well when trying to navigate the second unit through an important stretch without Luka to begin the fourth quarter.

Dallas needs a few of these guys to have the 15-20 point outbursts that they’ve shown they’re capable of somewhat frequently. Kleber needs to play physical defense to at least try to slow down Leonard. Dwight Powell needs to have those insane energy moments that he had in game five even if he’s on the court for just 5-10 minutes. While the stars like Doncic, Leonard and Paul George will grab all the headlines, games like this can be decided by the performance of the supporting cast.

Tip-off is set for around 2:30 on ABC this afternoon.