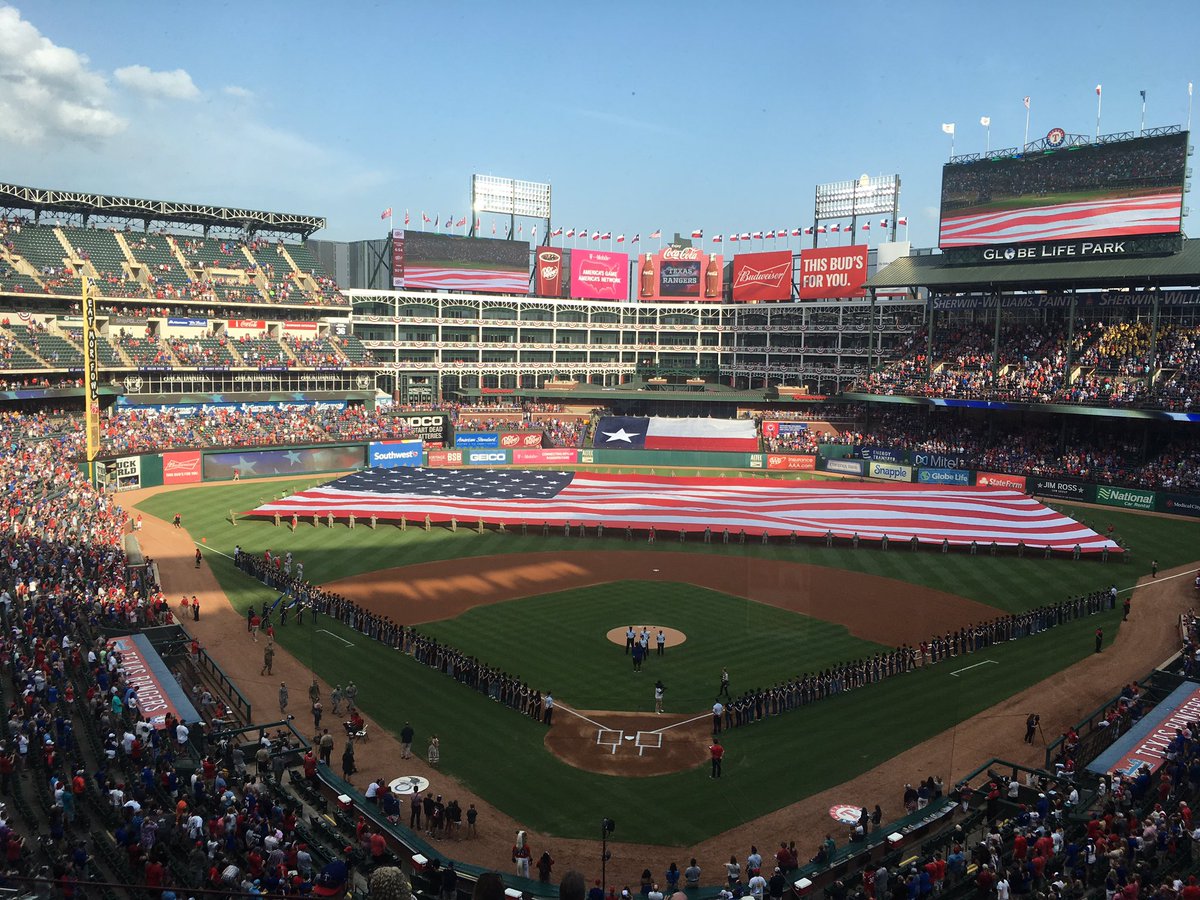 To Celebrate the Fourth of July, Rangers offense explodes in victory against the Angels

To Celebrate the Fourth of July, Rangers offense explodes in victory against the Angels

On America’s unofficial 241st birthday, the Rangers and Angels concluded their three-game series. Texas sent their other workhorse Lance Lynn to oppose the Angels’ rookie, Griffin Canning. The Rangers held their third crowd sellout of the season (45,556 in attendance), and first since the Opening Series against the Chicago Cubs. The fireworks didn’t just come after the game. The Rangers set some of their own throughout the night, with their bats.

Mike Trout began doing what he does best against the Rangers, hit home runs. Trout hit his ninth against Texas this season on a 445 foot shot to left field to put the Angels ahead 1-0. The Rangers answered with a sacrifice fly by Asdrubal Cabrera (that Kole Calhoun robbed of more damage). The Angels retook the lead with an RBI single by Simmons, but the Rangers one-upped Anaheim thanks to a Nomar Mazara double. The double followed a Joey Gallo walk, one of two for Joey on the night. Mazara matched a career high four hits on Thursday, the second time he’s done that in 2019.

In the first two months of the year, Chris Woodward placed Joey Gallo after Mazara in the lineup. However, in this series, Woody flipped the order and Joey would bat before Maz. I asked Chris Woodward before the game about the sudden flip in the lineup for this series. “I felt it was time; I wanted Joey to move up anyways,” Woody said. “He’s been pretty productive, [and] I wanted to give him more at-bats. That’s kind of the reason for newer age thinking. He’s open to it, [and] I feel like it makes us have a better chance of scoring multiple runs. Now Maz has protection [and] it puts Maz in more situations to drive in runs. I felt like Joey has protection, [and] we have a deep lineup. I want [him] to keep moving him upwards. He would like to have the lefty in front of him, so he knows how they’re going to pitch. I rather have Joey continue to take on tougher at-bats, he’s been so good.”

Count Chris Woodward as one of the many people in the ballpark impressed with @RougnedOdor's 2 HR night.#TogetherWe pic.twitter.com/p9YVgvn1WE

The Rangers added three more in the bottom of the fourth thanks to a two-run line shot Home Run by Rougned Odor and an RBI single from Danny Santana to pad the Rangers lead to 6-2, and chase the Angels’ starter, Canning. Though Odor didn’t finish there, Rougie launched a 471 foot shot to center field to add three more for Texas. The Angels tried to muster a rally in the ninth, but it only led to a Kole Calhoun RBI groundout, ending with a Rangers 9-3 victory. I asked Nomar after the game if anything felt different at the plate tonight, on his four hit night, than the past two days. “Nothing different. I feel the same the past few days, swinging the bat really good and feeling really good and just today I needed that.”

While the offense shot off like a cannon, Lance Lynn did what Lance Lynn’s been successful with, quality outings. Lynn pitched seven innings, allowed nine hits, no walks, two runs, and struck out five. The Rangers tagged the Angels rookie right-hander Griffin Canning with his worst start of the year. Canning pitched three and a third innings, allowing six runs, seven hits, three walks, but struck out six. Chris Martin threw a methodical twelve pitches and eleven strikes in his one scoreless inning. Locke St. John finished the night by allowing a run, a hit, and two walks.

Right now Lance Lynn is on pace for his tenth quality start in his last eleven starts.#Rangers

The Rangers head back to the road to Minneapolis as the club takes on the first place Twins to close out the All-Star break. First pitch is at 7:10. The Rangers send Adrian Sampson (6-5, 4.18) to the hill, the Twins counter with former Ranger, Martin Perez (7-3, 4.15). It’ll be Danny Santana’s first time back to Minnesota since the Twins traded him to Atlanta on May 8, 2017.

Danny talked before the game about going back to Minnesota, especially with the successful 2019 campaign. “A lot of the people in Minnesota wanted to see me [successful] like the way that was in my first year with them. I’m happy to go there and they’re going to see me that way.”

if this isn't a mood then idk what is pic.twitter.com/JnqpC4N0aZ