The PGA Tour isn’t the only group teeing it up competitively this weekend.  Out on the west coast, your favorite athletes, celebrities and famous names are teeing off at Edgewood Tahoe Golf Course.  Edgewood is a gem of a golf course that overlooks beautiful Lake Tahoe.  It is the annual site of the American Century Championship, a fun-filled golf tournament that donates all proceeds to charity.

This year, the entire tournament purse is being donated to the Equal Justice Initiative, along with organizations in support of COVID-19 relief efforts, including the Notah Begay III Foundation COVID-19 Response Fund and the Center for Disaster Philanthropy COVID-19 Response Fund, as well as regional Lake Tahoe nonprofits.  Over the years, the American Century Championship has donated more than $5 million to various charitable organizations.

Patrick Mahomes, who just signed the most expensive contract in NFL history, will make his competitive golf debut in Lake Tahoe this weekend.  He will be paired alongside teammate Travis Kelce and the man with the most electric golf swing on the planet, Charles Barkley.  It’s safe to predict this group’s score will be as high as the money they’ll be throwing around.

Former Dallas Cowboys quarterback Tony Romo is the two-time defending champion and will be teeing it up again this weekend.  Romo, who competes in PGA Tour events on occasion, is the favorite to win again.  His most likely challenger is former MLB pitcher Mark Mulder.  Mulder won the tournament in ’15, ’16 and ’17 and has finished second to Romo each of the past two years.

Romo is paired with two all-time great wide receivers Larry Fitzgerald and Jerry Rice, both of whom I’m sure he wishes he had during his playing days in Dallas.

Edgewood Taho Golf Course is magic.  I mean, pure magic.  It plays at an altitude of 6,200 feet and sits on the shores of America’s most majestic alpine lake.  George Fazio designed Edgewood in 1968 and was redesigned by his son, world famous golf architect, Tom Fazio.  It tips out at over 7,500 yards and plays a par 72.  It’s a course that consistently ranks among the best public courses in the country and is surely a mainstay on every avid golfers bucket list.

Just look at these views: 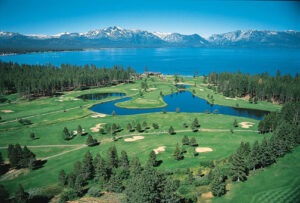 Yes, you can gamble on this.  Yes, I will be.  Romo is the smart pick but the value is non-existent.  My money is on former Davidson great, Steph Curry.  Here’s to hoping he can hit 20-footers on the greens like he can hit 30-footers on the court.  Check out these odds from Sports Insider:

This tournament is nothing but three days of fun mixed with the occasional good golf shot.  Charles Barkley’s golf swing is reason enough to tune in!

Enjoy the weekend everyone!