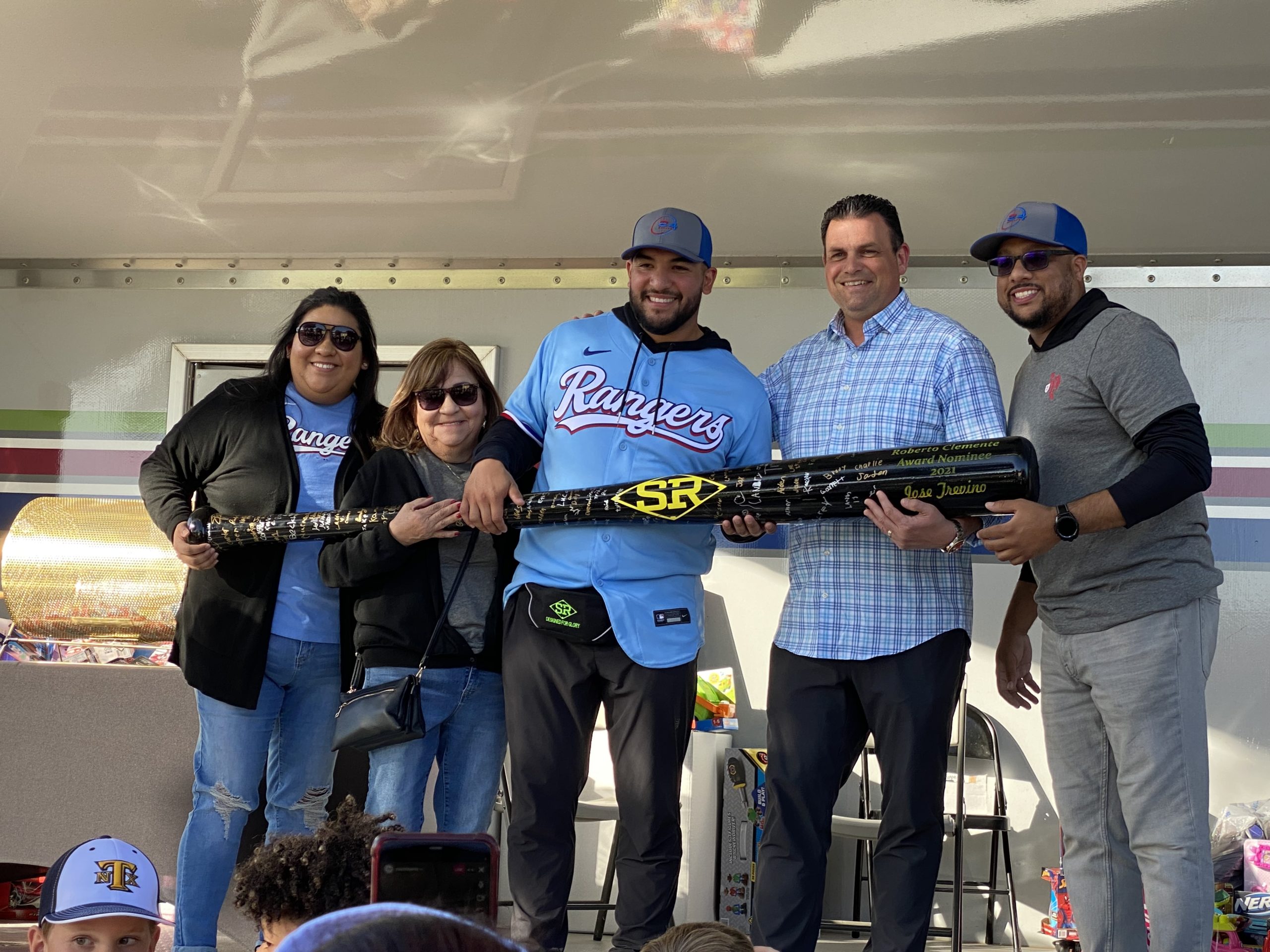 “It was like a little dream of mine just to do something like this,” Jose Trevino told me Sunday evening. The vision became actuality Saturday and Sunday for the Rangers’ Roberto Clemente Nominee for 2021. 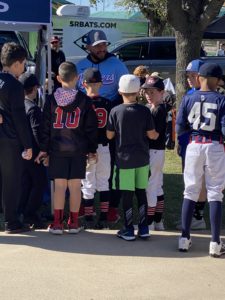 The Trevino Toy Drive Classic concluded Sunday afternoon, exceeding expectations from players, play24sports, and Rangers catcher Jose Trevino himself. In January, Jose talked about the success of the Trevino Toy Drive in 2020 but wanted it to grow. Then, in August, he hinted to me that something substantial was in the works. Then, Saturday and Sunday, it came to life at the Colony. “It’s been fun. It’s been crazy, awesome, [and] eventful,” Jose told me when asking to summarize the weekend. “I don’t know. I don’t have a word for it.”

Fifty-four teams competed among six age groups (between 7-14) throughout the two days. It was a collaborative effort among Trevino, his family, and play24sports. “L’Erin Hampton did an unbelievable job at play24sports bringing this thing to life, and he brought to light, and it’s been nothing but amazing,” Jose said. In addition, the Trevino family all did a fantastic job coordinating the event throughout the weekend.

Hell yea, @rangerscaptain is in the HOUSE!!! Or the park. #Rangers pic.twitter.com/lYecpfg1xS

There were booths stationed throughout Five Star Complex in the Colony along with good food, baseball, and of course, Rangers players. Jose’s teammates John King, Isiah Kiner-Falefa, Willie Calhoun, Jonathan Hernandez, Taylor Hearn, Nick Solak, and AJ Alexy came to visit. Plus, there were appearances by former Rangers David Murphy, Mark McLemore, and the Rangers Captain. “It’s really awesome the event [Jose] put on,” Nick Solak said. “To be able to come out [and] hang out for a little bit, it’s really cool. [It] kind of takes me back being that age and playing in tournaments like this.” Solak told me it was cool to see all of the different teams and age groups playing on the baseball field. “It’s cool to be at an event like this. Baseball brings a lot of people together in different ways.”

Jose’s favorite part of the two days? How about surprising a kid who repeatedly asked for Nick Solak. “He was like, Nick Solak, Nick Solak,” Trevino told me. “I was like, I don’t know if he’s coming, and I knew he was coming [Sunday]. Sure enough, [Nick] showed up, and he’d been asking for a while. [So] I pulled him up to the stage where Nick was signing, and Solak gave him one of his bats, [and] signed it.” For two days, about 90% of the time I saw Jose Trevino, he smiled. When kids asked for autographs, he signed (he kept about five sharpies in his awesome fanny pack he had). When folks asked for pictures, he would stop for photos. He would talk baseball with coaches and kids.

In addition to autograph signings, raffles took place for attendees to receive signed memorabilia from past and present Rangers. I watched some of the kids who won with their faces lit up like a Christmas tree. Plus, you can’t forget the baseball tournament itself. I watched kids from the 7-14 age range make great plays, look motivated, come up clutch hitting, and make some excellent pitches. As a baseball guy myself, to watch a young kid make a diving play and see the ball fall to their glove puts a smile on anybody’s face. On Sunday, Trevino and Taylor Hearn took a little bit to coach one game in addition to Jose scouting a few teams.

As for the turnout, it exceeded all expectations. “It exceeded all of [my expectations],” Trevino told me. “[I] thought it was great turnout [I] had a lot of fun,” Taylor Hearn said. I asked Nick Solak if he thought it would be this big. “No, I didn’t. We were pulling into the parking lot, and every spot was taken. [We] were like, oh my gosh, there’s a lot of people here. That was just one side, and then there are all of the other sides.” “Overall the event seemed like it was run really well,” David Murphy told me. “The weather was beautiful and overall that complex is an ideal location with a lot of space and a lot of teams always participating at their tournaments.”

After the raffle on Sunday afternoon, all of the Trevino Toy Drive Classic participants gave Trevino a giant SR bat signed by attendees. Hundreds and hundreds of signatures filled up a heavy-duty black bat that stunned Jose. “That thing was awesome. It caught me by surprise. I didn’t know that they were getting all of the kids to sign it,” Jose told me. “I don’t know where I’m going to put that thing, but it’s nice.” It was the happiness that capped off the weekend for Jose Trevino.

Jose Trevino was the 2021 Rangers’ nominee for the Roberto Clemente Award, and you can see why. “We have different opportunities to help different people,” Nick Solak said. “Trevino has been amazing about getting out in the community and helping the foundation. There’s a lot of people that watch us play and cheer for us, and I think it’s good to be able to give back a little in any way we can for those people that watch the Rangers and love in this area.” Regarding the influence of his teammates, Taylor Hearn said the Rangers have always been a tight group as a team. Trevino told me that he hopes the event keeps growing where players that live in the DFW area from other teams come out.

“More than anything, I’m just proud of Jose,” David Murphy said. “I’m always impressed with any athlete who sees the opportunity to use his platform to impact lives in a positive way but it seems so natural and second nature to him. A lot of players want to get out in the community to help but maybe it takes a few years into their career to get started because they either need to learn how to help or maybe they want to establish themselves on the field first but with Jose it just seems like it’s who he is. I would guess that he’s always had that selfless vision and so the second he arrived in the big leagues he was ready to start making that positive impact.”

There wasn’t an official count by the end of Sunday, but Jose Trevino estimated about 4,000 toys donated (and I’d assume more). If I know Jose Trevino, this is just the start. I will bet on a second-annual Trevino Toy Drive classic, more extensive in 2022 than in 2021, which is unimaginable. ” If there’s one thing I learned from Trevino regarding giving back to the community, it’s turning the unthinkable into reality.