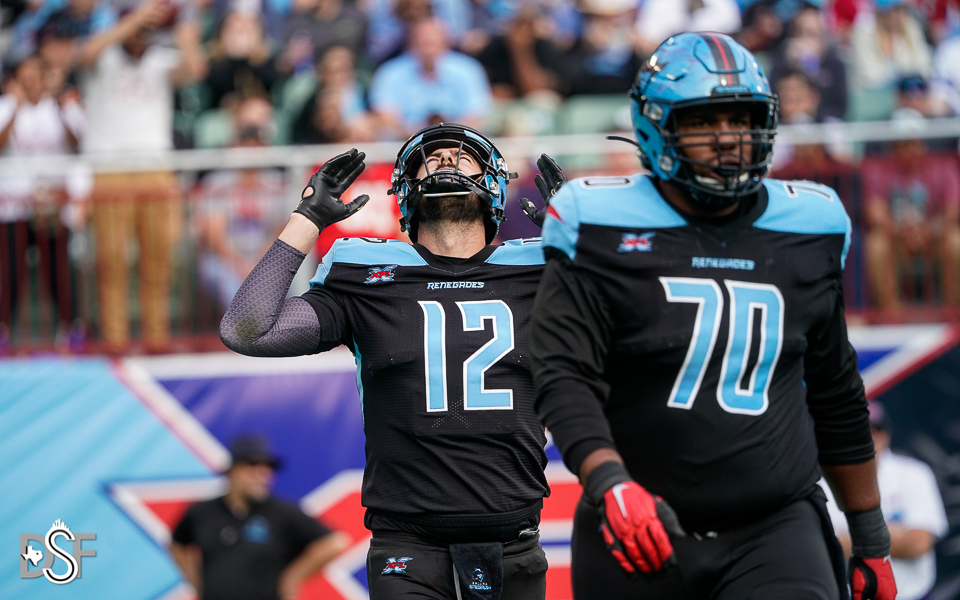 What was one of the leading story lines of the XFL season took a turn for the worst following the Dallas Renegades (2-2) 27-20 lost to Lone Star rival Houston Roughnecks (4-0) Sunday afternoon at Globe Life Park.

While the Renegades stacked together back-to-back wins under quarterback Landry Jones,  he hasn’t set himself apart from other quarterbacks in the league. And in the first half of play, Jones might of widened the gap between him and the XFL’s top-notch passers.

He threw three interceptions on Dallas’ first three drives. This wasn’t the last of Jones’ turnovers, as he also fumbled the ball two later, giving him four turnovers in the first half.

Nichols followed his pair of takeaways up with some strong statements about the Renegades’ starting QB.

The disastrous start invoked an agitated reaction from head coach Bob Stoops, who coaches Jones during his tenure at the University of Oklahoma.

“No. Oh, my gosh,” Stoops said following Jones’ second interception. I don’t know why he’s throwing it. The guy’s all over him.”

Bob Stoops' reaction to Landry Jones' second interception of the game is the kind of access we all need 😂 pic.twitter.com/wJNYlgF8lx

The turnovers woes carried over from Jones’ win against the Seattle Dragons last week. Though he threw three touchdowns, he also threw two picks and lost a fumble.

Despite the sluggish start, the game still remained competitive. Jones eventually shook off his struggles and led a touchdown drive of his own, which he capped with two-point conversion.

A Dallas field goal paired with a one-yard score from Renegades running back Lance Dunbar and a three-point conversion set the stage for an intriguing fourth-quarter with Dallas trailing 21-20.

Unfortunately, the turnovers continue to pour in for Dallas. On the Dallas 24, Jones dropped back and was pressured from linebacker Edmond Robinson who forced a strip-sack on Jones. A couple second later the Roughnecks were celebrating in the end zone from a 12-yard scoop-and-score.

Hard times continued to find its way to Jones. Following a three-and-out from Dallas and a needed defensive stand from the Renegades D, Jones day came to an end after he went down with an apparent knee injury.

An emotional Jones had been wearing a knee brace on his injured left knee, which kept him out of their week 1 matchup and which he re-injured on the play.

He watched as his backup, Phillip Nelson, attempted to orchestrate a comeback. But, in similar fashion, gave Houston their fourth interception of the game on a tipped pass.

No official word has came down about Jones’ availability for their week five home matchup against the New York Guardians Saturday.