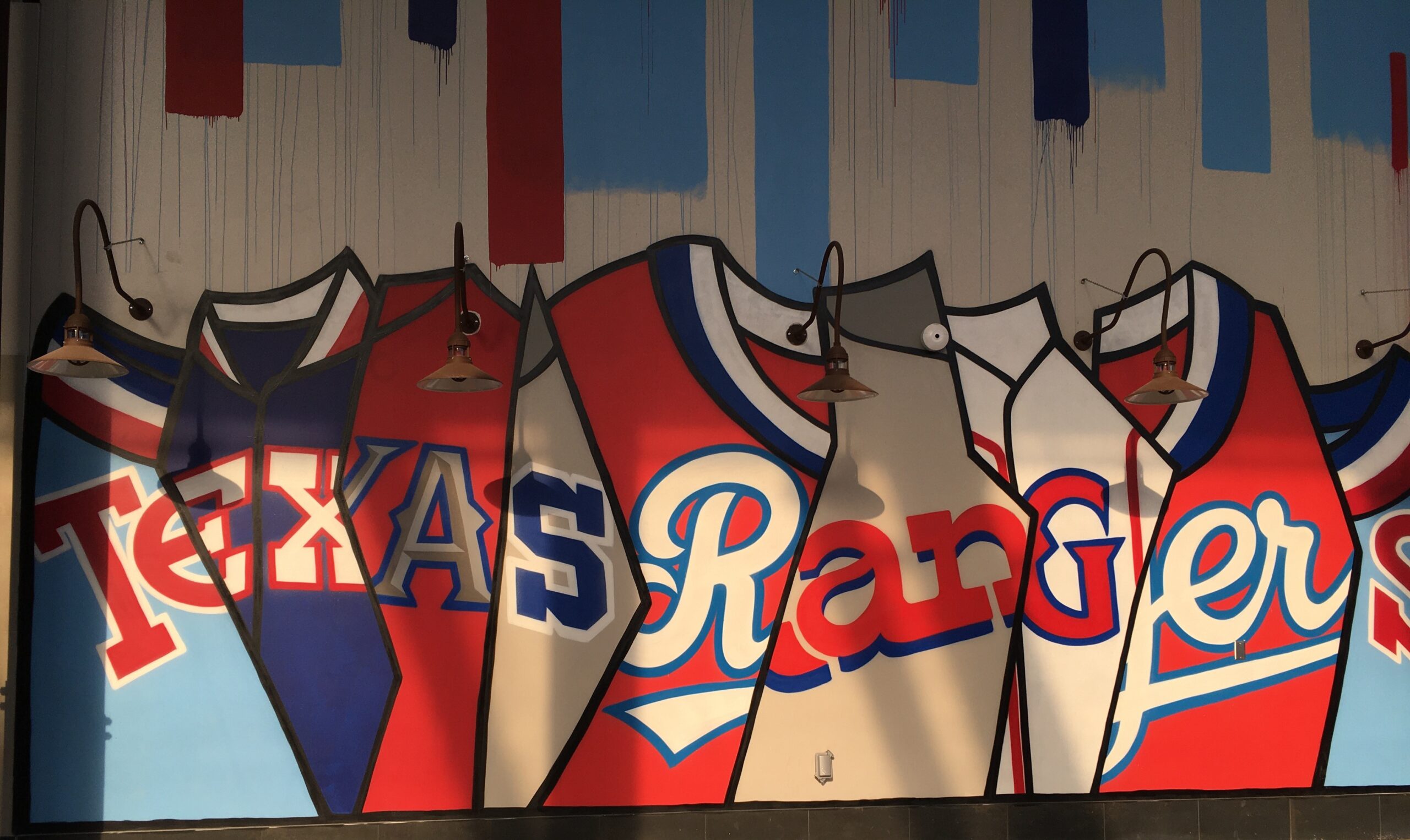 We all love festivities and always look forward to the holidays. I figure to celebrate the positives of the 2020 season with a recap turned into the twelve days of Christmas. To answer a follow-up question, no, I will not record myself singing this carol because I don’t want you all to lose your hearing.

🎵On the First Day of Season, Rangers fans got to see:
“A Gibson Complete Shutout.”🎵

On September 16, Kyle Gibson does what he usually does against the Houston Astros, dominates them. Gibson was one of five MLB starters to record a complete game nine-inning shutout in 2020. “There are too many people to thank and to give shout-outs to, but it was a lot of fun,” Gibson said after the game. That night, Kyle allowed four hits, three walks, and struck out nine.

🎵On the Second Day of Season, Rangers fans got to see:
“Two Gold Gloves.”🎵

It was the first gold glove award for both Isiah Kiner-Falefa and Joey Gallo. Coincidently for Joey, it was the first real season where he stayed put in one position (DH doesn’t count). For Isiah, the only shocking part is that he didn’t disqualify from third base because he got some work at short. That’s an unfair observation, but a truthful one. For Rangers fans, it feels good to get positive exposure on national television, and Joey Gallo agrees. “It’s good to see a Texas Ranger winning an award and being on ESPN and kind of getting that exposure. It’s very exciting,” Joey told me.

🎵On the Third Day of Season, Rangers fans got to see:
“Three Rangers Trades.”🎵

Remember, this is a 2020 regular season recap. The Rangers’ have made multiple trades this offseason but concentrating on the three made at the deadline. Mike Minor became an Oakland Athletic, Robinson Chirinos and Todd Frazier both went to the Mets in two separate deals. Last week, the Rangers completed the Frazier deal with New York by acquiring Ryder Ryan.

🎵On the Fourth Day of Season, Rangers fans got to see:
“Four Guzy Homers.”🎵

Ronald Guzman didn’t get too much of a look in the majors in 2020. The Rangers hoped he would be a full-time first baseman for Texas, but Summer Camp and Spring Training didn’t go as expected (got a late start). I’ll say this, Guzman made the most of his four shots. Two of them were majestic, and one was the biggest clutch shot of the year. Consistency is critical for Guzman in 2021 and the offseason is already off to an exquisite start with a LIDOM MVP award under his belt.

🎵On the Fifth Day of Season, Rangers fans got to see:
“Five Astros Wins.”🎵

Twenty-two wins in a sixty game season is terrible. I’m not sugar-coating that. However, there’s some sweetness to endure knowing five of those twenty-two wins came against the in-state rival, Houston Astros. According to Chris Woodward in August, the youngsters were eager, “I love that our younger guys, they’re eager to do it. Our guys can’t wait to play those guys.” It showed in 2020.

🎵On the Sixth Day of Season, Rangers fans got to see:
“Six Road Victories.”🎵

We can’t always have nice things, especially when you finish worst in the American League. Six wins in thirty games is horrific. That’s it.

🎵On the Seventh Day of Season, Rangers fans got to see:
“Seven Solak Steals.”🎵

Nick Solak is an underrated roadrunner on the base paths. In ten career MLB steal attempts, he’s nine of ten. Specifically, with the Rangers organization, Solak is 11 out of 12 (91.7%). Outside the organization, he’s 93 out of 124 (75%). Maybe a coincidence, or perhaps he’s showcasing that Lamar Jackson elusiveness.

🎵On the Eighth Day of Season, Rangers fans got to see:
“Eight Monty Saves.”🎵

Rafael Montero, now a Seattle Mariner, took over the closer role after Jose Leclerc went down with the same shoulder strain Corey Kluber suffered. The eight saves were the first eight saves Montero recorded in his major league career. I know he’s to a rival now, but a cheers hoping success for Rafael Montero. Now it’s time to speculate the Rangers’ current closer.

WOW. What a way to get your first career save. Rafael Montero strikes out Mike Trout to give the @Rangers the 1-run win! pic.twitter.com/1Y3wTRZ2dH

🎵On the Ninth Day of Season, Rangers fans got to see:
“Nine Rookie Debuts.”🎵

When life gives you lemons, you make lemonade. When the season doesn’t produce, and you have no minor league season, you call up young players. That’s what the Texas Rangers accomplished in 2020. The young core included guys like Kyle Cody, Anderson Tejeda, John King, Sam Huff, and Sherten Apostel, who was in A or high-A ball a year ago. Most of these guys had good seasons facing against the best of the best in opponents and could find themselves on the brink of making the club come March.

🎵On the Tenth Day of Season, Rangers fans got to see:
“Ten Joey Jacks.”🎵

There’s nothing quite like watching a “Joey Jack.” Joey Gallo’s homers widen the eye like getting a gaming system for Christmas as a little youngster. While 2020 showcased the lowest homer to at-bat radio for Joey, fans witnessed some elevated moonshots and saw Gallo made history with the first Globe Life Field regular-season homer. Of course, he was sporting the new baby blue uniforms that had no complaints.

🎵On the Eleventh Day of Season, Rangers fans got to see:
“Eleven Lynn Quality Stars.”🎵

Lance Lynn is a Chicago White Sox pitcher now. However, that doesn’t mean we can’t celebrate a fantastic season for Lynn, the bulldog. Lynn had thirteen total starts where eleven of them classified as quality. He had two six-inning shutout starts and seven starts where he allowed two runs or less. Coincidently, his two bad starts came against the Astros, and maybe it’s a good thing for him he’s in the American League Central instead of division rivals with Houston (or a good thing for the Astros).

🎵On the Twelfth Day of Season, Rangers fans got to see:
“Twelve Trevi Acts of Kindness.”🎵

I can’t write down how many acts of kindness Jose Trevino delivered in 2020, but I know it’s more than twelve. But to ignore what the Rangers’ catcher continues to do in the community is not right. Jose Trevino received the 2020 Richard Durrett Hardest Working Man award, and honestly, it combines between on and off the field. It’s a great indication that despite a challenging year, there remain excellent people giving to others.

Thank you to everyone that donated and helped with this years toy drive! I know it was different but it was probably the most successful one yet! It was an incredible weekend, also HUGE thanks to @j3_creative for making this sweet video! #DreamBig #TrevinosToyDrive pic.twitter.com/7EcGwNRydE

Rangers Spring Training starts in less than seventy days, and before we all know it, pitchers and catchers will report. I understand that the beginning of 2021 comes in question, but that’s for 2020. Let’s all sit back, take a deep breath, and enjoy one another in a grinding, challenging, and unexpected 2020 year (not just baseball). Merry Christmas and Happy Holidays!