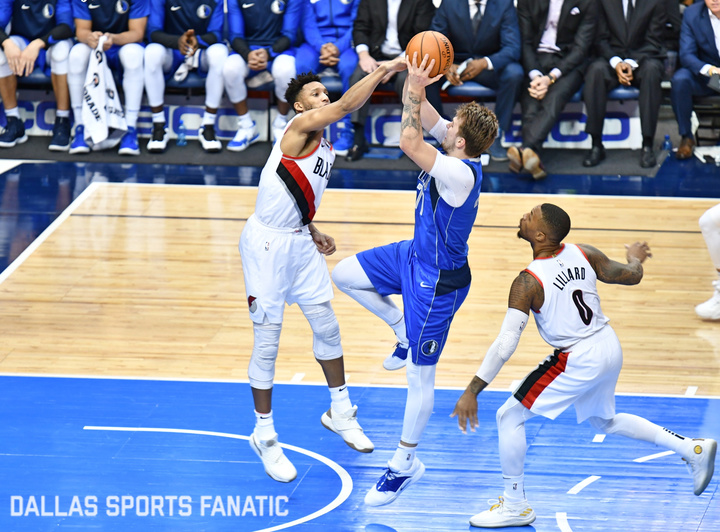 Two things to watch for as Mavs travel to Portland

Two things to watch for as Mavs travel to Portland

Tonight, the Dallas Mavericks take on the Portland Trailblazers in Portland. The two teams are polar opposites of each other in the standings. Dallas is currently 28-42 and second to last in the Western Conference. The Damian Lillard led Trailblazers are 43-27 and own the 4th playoff seed in the West. Since the All-Star break, Dallas is 2-11 and Portland is 9-4. The game has major playoff implications for Portland.

Both the Mavs and Blazers are limping into the game. Luka Dončić recently sprained his left knee and has been hobbled in the last three games because of it, although he managed to put up a 29 point, 10 assists, and 13 rebound triple-double in the last game it isn’t hard to imagine that his knee may still be bothering him. Dallas forward Maxi Kleber suffered a sprained left wrist after a hard fall in the Mavs recent game against the Pelicans. He also banged his knee pretty hard and wound up watching the end of the game from inside the locker room. Maxi will probably not play tonight, which could open up some more minutes for Dwight Powell and Dirk Nowitzki.

Blazers guard CJ McCollum recently strained his left knee. Although the Blazers medical staff said he avoided serious injury, he is expected to miss the remainder of the regular season. The injury to the Lillard’s running mate comes at the worst time for Portland. The Blazers are currently locked in a tight playoff race. They are only one game ahead of the eighth seed and two games away from the third seed.

Tonight is the last game of the season between Dallas and Portland. Surprisingly, Dallas owns the winning record this season 2-1. Dončić has had some of his best games against the Blazers, including a highlight buzzer-beating corner three pointer to send a game to overtime in December. He has averaged 24 points, 10 rebounds, and 5 assists against Portland. In the most recent game in February, he put up 28 points, 9 rebounds, and 6 assists. Look for him to take advantage of the Blazers smaller backcourt players.

Since it is the last time Dallas will play in Portland this year, it could also very well be Dirk Nowitzki’s last time playing there. If you are a fan of the tributes teams have given him recently while on the road then tune in tonight. There is no guarantee that Portland will do anything but their head coach is Terry Stotts, who was an assistant coach for the Mavs when Dallas won the championship in 2011. I imagine this tie to Dallas may push Portland to do something special for Dirk. Dirk hasn’t said he is retiring, but as they say, it is best to give people the flowers while they can still smell them.