The Dallas Mavericks’ offseason began the moment the buzzer sounded on their lopsided 119-96 loss in Game 7 to the San Antonio Spurs.

It’s well known by now that the Mavericks do have plenty of flexibility this summer to improve the roster whether it be in free agency or the trade market. Mavs Fanatic partners discuss the topic of Tyson Chandler and a possible return to Mavs blue.

If the Knicks miss out on Carmelo Anthony, there is a good chance they make Chandler available in trade discussions. While the discussion about whether or not the Mavericks should have let Chandler go following their championship season remains a mystery, this time around should leave the Mavericks with one simple answer – No!

Yes, Chandler is only 31 years old, but on those knees and that historically ailing back, the Mavericks need to start looking younger. Chandler could provide them with a very athletic and versatile defender in the paint, which is something they sorely lacked, but he only played 52 games this season. While the Mavericks medical staff seemed to have all the answers in Chandler’s first go around, this isn’t the time to be taking chances. 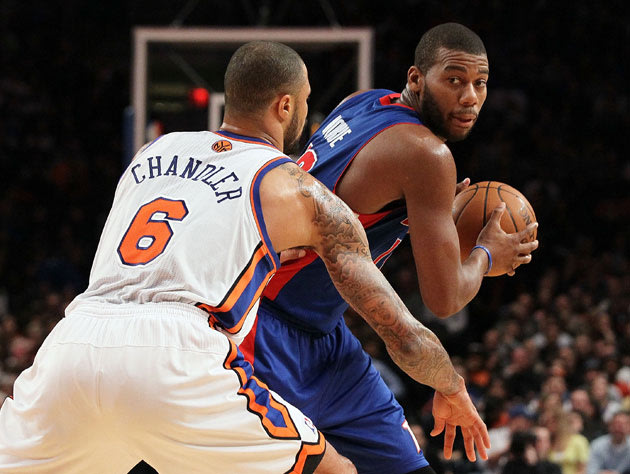 The Mavericks scored on a huge signing of a still young star like Monta Ellis, so why not look to go younger here as well. Greg Monroe could be that option. He is only 23 years old, and with Rick Carlisle’s ability to develop young talent, he could turn into a viable option long term, whereas Chandler will only provide the short term outlook.

Monroe played all 82 games this past season and averaged 15.2 pts and 9.3 rebs. He could use some improvement in his blocking ability, but he provides Dallas with a big man who can rebound the ball, provide some offense, and play defense.

While the Mavericks are looking to give Nowitzki the best shot at winning, they still have to be smart when it comes to finding the right pieces for the future. I believe that Chandler will only solve the issue IF and only IF he stays healthy.

Even then, it will only be for the next few years, and the Mavericks will be left with no Nowitzki and no big man. The Mavericks must find a younger better option at this point, and I’m not sure Chandler is that option, healthy or not.

The Mavericks will have many options to improve its roster over the course of the offseason. Several different ideas are surfacing already about what needs to happen for this team. One of those premature ideas originated from ESPN that offered the idea of Dallas re-acquiring center Tyson Chandler along with defensive wing Iman Shumpert.

Why would Dallas be interested in bringing back their championship center after his three seasons with the New York Knicks? Defense and more defense. Dallas will keep an eye on the Knicks outlook and whether they make the center with one year left on his contract available in trade.

Dallas’ intent this summer will need to be on overall defensive improvement while also getting younger top to bottom. The potential free agent class is rather attractive, but cross names like LeBron James off the wish list – it’s just not going to happen.

Chris Bosh may be an option, but do you really want to spend $20 million on the now 31-year-old forward/center who has clearly stated he had no interest in playing for the Mavericks back in 2010? My opinion is that Dallas would be better off paying other center options in free agency such as Spencer Hawes or Detroit Pistons’ restricted free agent Greg Monroe.

Now Dallas will also need to look into younger defensive two-way players on the wing to replace older guys like Shawn Marion and Vince Carter.

This brings us to Tyson Chandler and how he could end up back with Dallas and why it’d be a positive reunion. We’re not here to argue whether the decision to let him walk in 2011 was the right or wrong choice, everyone holds his own view on the issue.

Chandler would be 32 when next season gets underway, the same age as Mavs current starting center Samuel Dalembert. That said Chandler’s intensity and intangibles are not matched by man y in the NBA at his position, only guy I say is better in that area would be Joakim Noah.

While I share the notion that it’s best to go younger and with a less injury-prone player, I believe Dallas could do much worse than Chandler back in Mavs #6.

What do you think, Tyson would be a good addition or better to look elsewhere?