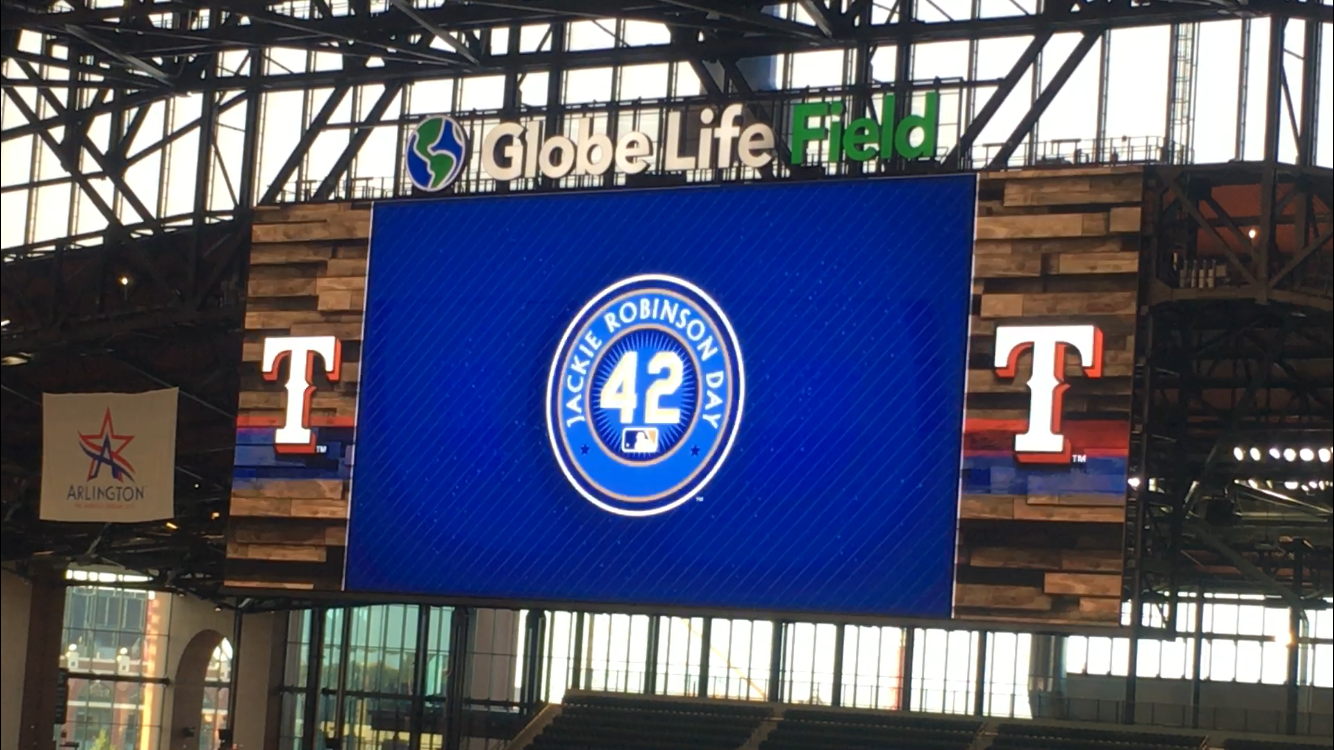 Up for the Challenge: Rangers defeat Dodgers in series opener as they reflect on importance of Jackie Robinson Day.

Up for the Challenge: Rangers defeat Dodgers in series opener as they reflect on importance of Jackie Robinson Day.

I always believe coincidences exist. Strange occurrences can happen at odd moments. For example, the Heineman brothers able to reunite at Oracle Park a month ago. Friday night was a lot to soak in for baseball, the Texas Rangers, and Chris Woodward.

Jackie Robinson Day is a day of remembrance for what Jackie brought to baseball and sports in general. It paved the way for African American athletes, and other cultures, to have the chance to play the game they love to play. Typically, Jackie Robinson Day happens on April 15th yearly to celebrate Jackie’s debut, back in 1947. However, with the shortened schedule and the season starting in late July, MLB scheduled Jackie Robinson Day on Friday.

"He would be so proud of them."

Sharon Robinson speaks to Mark McLemore about how her father, Jackie, would be feeling about the players' actions today.#TogetherWe | #Jackie42 pic.twitter.com/AQKQPoS9LR

The Rangers took the field against the club Jackie made his debut with, the Dodgers. Chris Woodward reminisced about 2015, where he was at Dodger Stadium coaching with the Mariners. “That meant a lot to be able to see it, be in Dodger Stadium and feel the energy of the day and every day since then I have always reflected on what he did for not only the game but the country and what came after that. Jose Trevino talked pregame about what Jackie means to him, “I get to play this beautiful game of baseball,” Trevino said. “I get to “come to work” – this isn’t work, for me – but I get to do it because of Jackie Robinson.”

Thank you for paving the way, Jackie. pic.twitter.com/I5YfkbEWYC

The past week made Jackie Robinson Day more meaningful to the baseball world. Chris Woodward talked before Friday’s game about sending a message to younger black MLB athletes. “I think it’s important, especially being Jackie Robinson day. Celebrating the first African American player would be awesome for baseball to really highlight and just show Hey, this is where we were.” The Rangers joined the Oakland Athletics Thursday in boycotting the final game of their four-game series along with twelve other teams and six on Wednesday.

Rangers’ manager Chris Woodward welcomed some familiar faces to Globe Life Field. Woodward was a third base coach for three-season in Los Angeles, and for the first time, was on the opposite end against the Dodgers squad.

Mike Minor had his best start of 2020. Minor pitched six scoreless innings with three walks and six strikeouts. The Dodgers tied things up in the seventh off Joely Rodriguez, but the offense came to life against a top-tier Los Angeles bullpen. The Rangers batted around in the seventh scoring four runs, thanks to a Derek Dietrich solo home run to start things. The Rangers scored six runs in an opening game of a series, something they hadn’t done in 2020 (they averaged 2.5 runs/game in a series opener).

“I think it was a good challenge for us,” Chris Woodward told me after the game. “It’s a good challenge to measure up and say hey, we can beat any team, just have to play more consistent on a night-by-night basis.” Friday’s win was a great showcase for Leody Taveras, who robbed Justin Turner of a home run, stole a base, and scored the first run of the game.