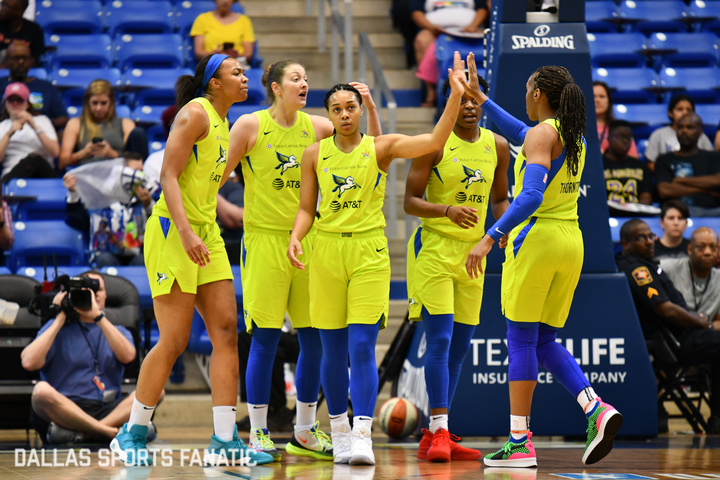 The Wings (2-5) showed out against the Mercury Thursday night handing Phoenix a stinging 69-54 loss.

Kayla Thornton fearlessly led the Wings with a career-high double-double of 18 points, 11 rebounds and three assists in the duration of 35 minutes played.

“Kayla Thornton is turning into one of the better two-way players in the league,” said Coach Brian Agler. “She’s embraced the defensive stopper mentality, she rebounds the ball and now she’s found a way to put points on the board for us.”

Thornton was the crafter of big plays for Dallas including a couple of hail-Mary three-pointers to follow up the one she hit last game against Atlanta, the Wing’s first season win.

You might remember back when forward Azura Stevens jokingly threatened former teammate Liz Cambage about how much she looked forward to throwing a block party for the now Las Vegas Ace.

Stevens turned the house upside down with a career-high four blocks, two of which victimized Griner on the receiving end.

“I knew it would be a big matchup with Griner,” said Stevens. “She’s a phenomenal player and we knew she was going to score but we were going to make her work for every basket.”

“And yes, I did tell Liz that and I’m excited for that to come to fruition Saturday.”

Mercury guard Diana Taurasi’s absence was crippling for Phoenix, but Dallas managed to out-score Phoenix in all four quarters aside from opening a can of rebounds on the Mercury, 40-28.

The Wings played with confidence, aggression and navigated the court strategically, but more importantly they looked like a team who is demanding and no longer asking to be taken seriously.

“We have a team of extremely gritty players,” said center Theresa Plaisance. “We might not have the superstars but we have the biggest hearts in this league and we have the most fight. You can’t match our effort.”