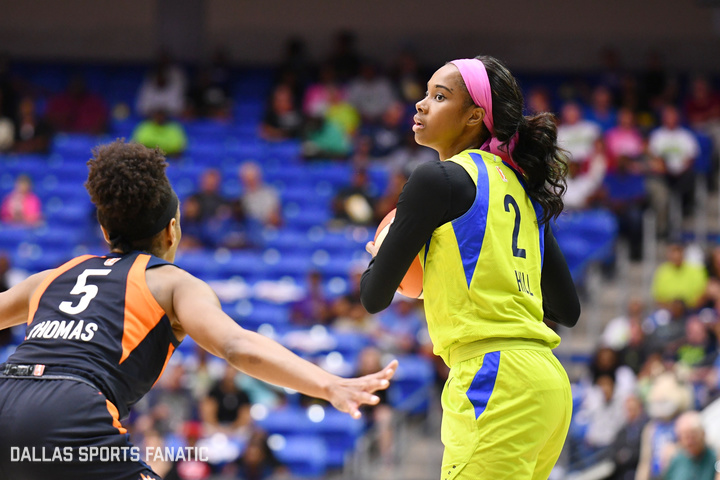 Despite any negative rumors that may be circulating regarding the unity of the Dallas Wings, guard Skylar Diggins-Smith wants to make one thing clear: the Wings have every intention of making playoffs.

Wednesday night’s matchup marked the return of Diggins-Smith after having suffered a facial injury. Diggins-Smith ended the night with 18 points, three assists.

“We just gotta stay together,” said Diggins-Smith. “We got eachother’s back in this lockerroom so no matter what’s going on, what’s being said around here, we’re 12 strong. We understand what’s at stake.”

“We want to play in the playoffs— that’s an agreement that we all have. We just gotta figure out how to get the monkey off our back.”

Center Liz Cambage took a hard foul during the fourth quarter, causing her to leave the game early with 2:40 left on the clock. There are no details about the extent of her injury, but the hit she took to the head could very well cause Cambage to sit out Saturday’s game against the Atlanta Dream. Cambage led the Wings in scoring with 29 points, nine rebounds.

With 42 seconds left to play in the game, a 26-foot three point jumper by Theresa Plaisance brought down the Wing’s trail to just six points. Plaisance put on an exceptional performance that ultimately gave the Wings a fighting chance after being down by as many as 22 points.

“Tonight was just me doing what I do. It doesn’t come down to that last couple of seconds it comes down to the whole game,” said Plaisance. “We’re such a talented and capable team and I think that these last five games you’re going to see a team that really has a fire.”

Having Cambage and Plaisance down the court made all the difference for this Wings team and it’s safe to say we can expect Plaisance to earn more playing time as the end of the regular season draws near.

Next up the Wings will travel to Atlanta where they will take on the Dream Saturday afternoon.