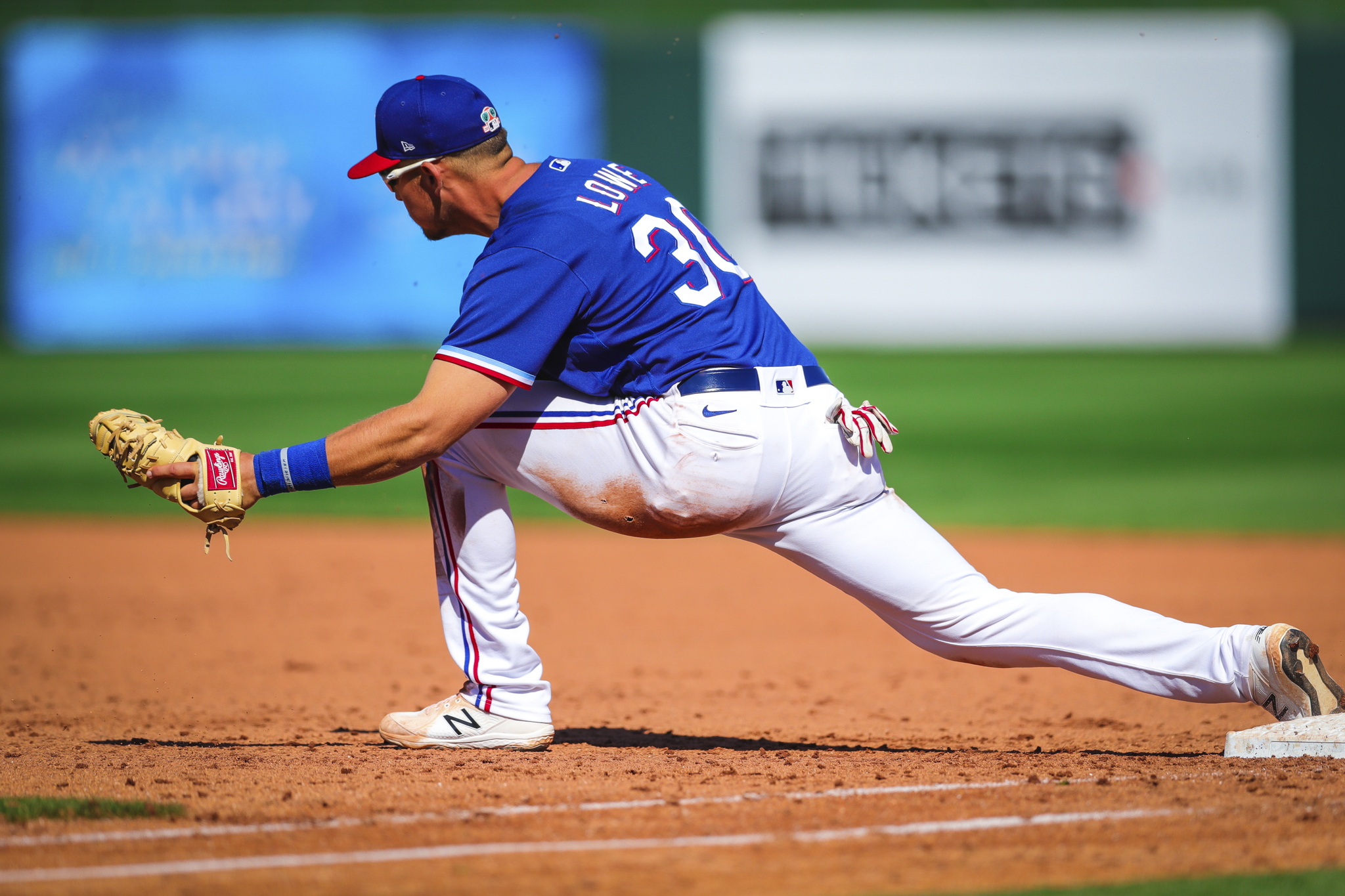 What are the biggest questions to answer for the Ranger bats in 2021?

What are the biggest questions to answer for the Ranger bats in 2021?

With just over two weeks until Opening Day in Kansas City, what are the biggest questions surrounding the Ranger position players still battling it out in Surprise?

With so many players vying for three spots in the lineup, what is your prediction for the opening day outfield for the Rangers?
Alex Plinck: Joey Gallo is going to start in right field, barring any injury. David Dahl is recovering after an injury-plagued 2020, and while he hasn’t seen much in the outfield, the Rangers are playing it slowly, so he’s ready to hit the field in 2021. Look for Dahl to be in the lineup and either in left-field or designated hitter. If Dahl is the designated hitter, I think Khris Davis may sneak into the lineup, especially if Kansas City goes with a lefty on opening day. Chris Woodward didn’t rule out an injured list stint for Willie Calhoun to begin the season, and with a history of muscle injuries for Willie, the Rangers will be cautious. For center field, I think the corner is turning for Leody’s spring. The Rangers want to get him more at-bats, and while Eli White is putting on some competition, I don’t see Taveras giving up that center field spot. I think Leody may start as the nine-hole hitter on opening day but not relinquishing the starting center field spot.

Dylan Duell: Having the benefit of knowing that Willie Calhoun is a no-go for Opening Day, I’ll go with a Dahl/Taveras/Gallo trio from left to right in the outfield. If Dahl isn’t ready, I would imagine the Rangers would go more defensive-oriented with Eli White in left and then Khris Davis serving as the DH with no Calhoun or Dahl in the picture.

Garrett Jones: I whole-heartedly agree with Alex. Something that is overlooked by many is the fact that Joey Gallo isn’t just a given in right field because of his bat- but because he’s a plus player in the outfield, too. In fact, you could argue that Gallo was actually more valuable to the Rangers in the field than he was at the plate with 457 errorless innings in 2020 on the way to a gold glove. After a 2-4, two-double performance against Milwaukee on Saturday, Taveras is definitely the front-runner for the centerfield spot. Dahl makes more sense in the field than Davis- but Davis’ bat could still be valuable to the Rangers as a DH.

After a few years of seeing the ups and downs of Ronald Guzman at first base, is it time to just let the newly acquired Nate Lowe take over or should Guzman be able to prove himself yet again?
Alex: While everyone jumped on the Nate Lowe train and even Jon Daniels said that they look to Lowe as their starting first baseman, it’s too early to make any significant distinctions. Lowe still has to prove himself, and he hasn’t shown too much on the field this spring. Meanwhile, Ronald Guzman provides better at-bats at the plate and is swinging a hot stick that is putting the Rangers in an interesting position. If the club wanted to, Lowe could start in AAA since he has options or have Lowe work at a different position (or heck, designated hitter if Willie is on the injured list). Lowe is beginning to show more aggressiveness with two strikes, something Chris Woodward says he wants to see more of, but it’s hard to ignore Guzman’s success in camp. The motto this Spring for the Rangers is that everyone has to prove they belong and earn their spot.

Garrett: Ever since the team acquired him in December, I’ve been puzzled as to why Texas is so committed to Lowe at first. The team has explicitly said that it acquired him with the intention to start- and based on the numbers, I just can’t see why. He went just 5-22 in in 2020 with Tampa Bay and played just one playoff game with the American League champions. He’s continued the slow start in Spring Training with the Rangers, recording only three hits in 18 at-bats. Guzman hasn’t delivered on the promise he showed in Frisco and Round Rock, sure, but there’s still upside. Alex brings up an interesting direction Texas could go in with Lowe starting at AAA because of his minor league option. If i’m Texas, that’s the direction I head in.

Dylan: I agree with Alex and Garrett. Lowe has options and Guzman doesn’t. If Guzman is showing he deserves another shot and Lowe isn’t just absolutely seizing the starting job, it’s not worth trying to force Guzman into the already crowded outfield or risk losing him through waivers. While Guzman never putting it all together is very frustrating, the defense is still very valuable at first base. It definitely stood out whenever Todd Frazier was there instead to start last season.

Joey Gallo has been on fire this spring with five home runs in just 16 at bats. After being an All-Star in 2019 and then a terrible 2020, what are your expectations for Gallo this season?
Alex: Joey has mentioned his approach change and wanting to hit more line drives this Spring. It looks like he’s more comfortable at the plate and putting together better at-bats. One thing to keep in mind is that this Spring, with the elimination of JIC (just-in-case) players and split squads, these guys are mainly facing big-league pitchers or guys starting deep in other teams’ systems. As Joey told me, the competition this Spring is more elevated than in previous camps. I think you’ll see more consistency in the on-base percentage side for Joey, similar to 2019 this season. The power numbers may slightly go down since the new park is more extensive and the ball doesn’t carry as much. However, a .380 OBP Joey Gallo is a good thing, and if guys like Dahl, Willie, or heck Khris Davis get hot, they can add protection to Joey in the lineup.

Garrett: Again, I’m expecting huge things in the field for him- and, in general, a healthier 2021 for him. He’s really never played a full season with the exception of 2017 and 18, when he hit 40-plus homers in both seasons. He was an All-Star and well on his way to slugging the Rangers to contention for a wild card spot in 2019. I’m keeping the expectations modest and setting the goal posts at him playing 140-plus games this season- which should yield a 40-plus homer year- depending on how much the new baseball limits long balls.

Dylan: If Joey is able to stay healthy and this season plays out like a normal one, 162 games played, I would expect him to be much closer to the 2019 version of Gallo than the one we saw last year at the plate. Remember, they only played 60 games! That’s the equivalent of a guy having a slow first couple of months to a normal season. I’d expect Gallo to hit between 30-40 homers again this season and to flex the better overall hitter capabilities he showed in the first half of 2019.