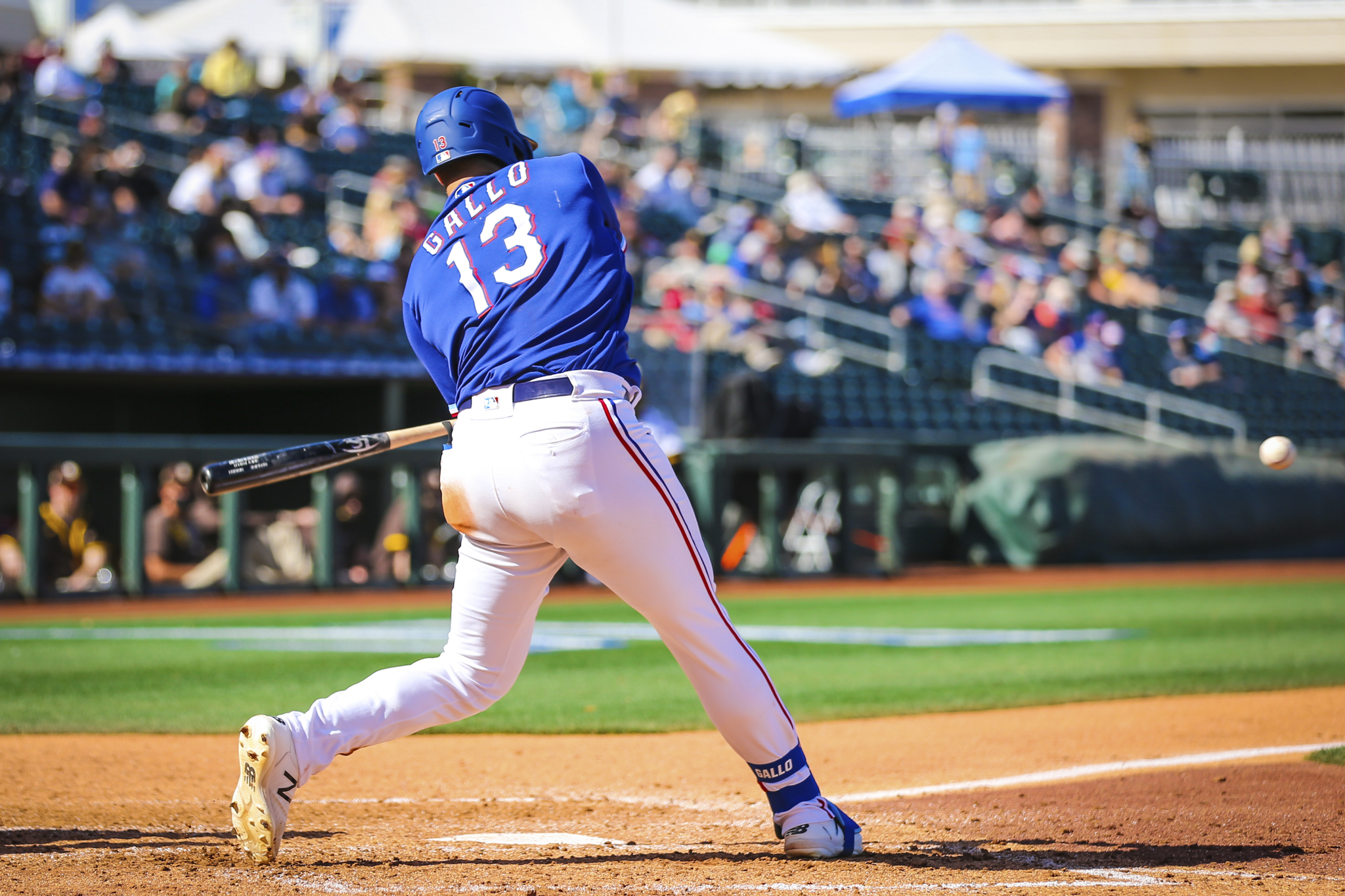 What are the major talking points around the Texas Rangers in 2021?

What are the major talking points around the Texas Rangers in 2021?

Now a few weeks into Spring Training out in Surprise, there are some general feelings and vibes surrounding the Rangers after the results of a week-plus of exhibition games. Ultimately, there are just so many questions to answer with this team going forward that it might be July before anyone has a real pulse on the club. We gathered our Rangers writing staff to answer some general questions about the current state of the club heading into the 2021 season.

After a disastrous 2020, who is someone on the Rangers you think could pleasantly surprise in 2021?
Alex Plinck: This is a tough one because I have a few names who could bounce back after a rough 2020. I do think Joey Gallo can turn the corner and provide either a reason for an extension or a great trade piece. Gallo’s at-bats this spring are fantastic. His home run on Sunday came on a 1-2 count after fouling off a tough pitch. Chris Woodward says he’s been showing that poise even during the backfield work in the mornings. “He’s short to the ball, he’s relaxed, there’s no tension,” Woody told me. “He’s getting “A” swings constantly.”

Defensively, you know what you’re going to get, but at the plate it looks like Gallo is mentally more even-keeled. He’s also taken on the leadership role with Choo and Elvis departed. At this point, no extension talks are happening and it’s likely it’ll be quiet for a while, but one week into Spring Training Joey Gallo is locked in. He’s actually too locked in to where Woody wants to conserve him up until Opening Day. “I kind of want to bottle him up and move him to opening day.”

Darien Clark: I believe you could make the case for just about any of the starters to surprise us in 2021. The team is the youngest it’s been in recent memory and opportunity is certainly available across every position. Gallo could surprise by taking another step to a superstar, and Solak may blow us away as an everyday second baseman that could eventually garner a Michael Young-type comparison. Yeah I went that far. All that to say, a player I really see surprising all of us in 2021 is Leody Taveras.

Taveras has now been given the glove to protect CF everyday. Unless he goes through a huge slump to mess that up, I don’t see him giving it up. I see Taveras taking the opportunity and capitalizing on it. He only batted .227 last season, so there is certainly room for growth at the professional level. In his last two seasons prior to 2020, he eclipsed .290 in the minors. With him expected to hit at the top of the lineup each day, I expect him to (again) capitalize on his opportunity and bat somewhere around .280 this year. I will say, at this point his offense is not his strength, however, it’s his defense where he shines and surprises people and other ball clubs. His combination of size, speed and arm strength is rare, so be on the lookout for that in centerfield this year and beyond.

Garrett Jones:  Khris Davis. Heck, we’ve seen him rake in Arlington with Oakland, right? Maybe Chris Young and Jon Daniels took a page out of the 2010 playbook, when the team signed known Ranger-killer Vladimir Guerrero as a designated hitter guided by the mantra “if you can’t beat him, sign him.” The strikeout-prone Davis will definitely have a short leash on an expiring deal- but this is the same player that hit 48 home runs just three seasons ago. The “boom” potential is there.

With so many question marks all around the team, is there any particular area of the roster that has you more optimistic than others?
Alex: The catching depth on this roster is really good. There’s a lot of praise for Jonah Heim, who the Rangers acquired from Oakland in the Elvis Andrus deal. I don’t think Heim will be on the roster come opening day, but I do see Heim getting somewhat of a shot in in 2021. Then of course you have Jose Trevino who is developing to a leader on the team. Don’t forget about Sam Huff too. In limited time, Huff opened a few eyes in 2020. It’s a shame that he’s not getting much Spring Training playing time due to a hamstring strain. The Rangers have leverage if they want to deal someone from that group.

Darien: I’m very optimistic about the outfield. At the end of last season, there were a lot of question marks surrounding it all together, especially out in left. With the active offseason and growth of the young guys, I now view it as the most optimistic group compared to the others. With Gallo, Taveras, David Dahl, Willie Calhoun and Davis mixed in, this should be the strongest and most consistent group of them all. Both defensively and offensively, each of these guys will be what carries (relatively speaking) this team, especially in the batting order. All of them are capable of batting at least .250 with each of them capable of hitting at least 15-20 home runs. I’m not only optimistic about this group, but I expect them to be the strongest consistently throughout the long season.

Garrett: The Rangers have the potential to be a good defensive team. They also have the potential to  struggle at the corner infield spots if new projected starters Rougned Odor and Nate Lowe struggle at third and first base, respectively. Leody Taveras has a ton of speed in center field, and Gold Glovers Isiah Kiner-Falefa and Joey Gallo need no introduction- even though there could be growing pains with IKF at short.

What do you think is a reasonable expectation for the 2021 Texas Rangers?
Alex: Look, the win/loss record for the Rangers in 2021 won’t be pretty. However, at the end of the season if guys like Leody Taveras, Kyle Cody, Wes Benjamin, and others are able to enhance their craft to their capability than to me it was a positive season. Getting Josh Jung some major league experience should be a major goal for Texas. The expectation isn’t in the win/loss column, the expectation is for the Rangers trend in a positive direction. If Texas can land successfully in the draft along with developing their future, I think it’s a successful campaign.

Darien: It’s nearly impossible to slate a win-loss record with a team that lacks an overall identity. Anything could happen in a full-length baseball season, but all signs are pointing towards development or lack-there-of. Which means a lot of young players full of playing time and continued growth. I believe a 70-win season is relatively fair, but I believe a 65-win season seems to be more accurate uif that makes any sense. The starting pitching is the “Achilles heel” which will put a dent in our average (at best) batting order and will ultimately decrease the win total. All in all, it depends how quickly this team molds and develops not only individually, but collectively.

Garrett: It’s hard to put any kind of win-loss expectation on a team as volatile as the Rangers have been over the past decade. They’ve overachieved- see 2015, and the first half of 2019- and have also disappointed dreadfully- see 2014 and 2017. With the frontline pitching as bad as it is this season, I think a reasonable expectation is to be within 20 games of first place by the end of the regular season, and around 10 games out by late summer. That would mean at least keeping things interesting until the dog days roll around and the true contenders emerge at the top. Houston is expected at around 90 wins, tops in the AL West, according to betting odds, so that would mean a 70-win campaign for the Rangers. That’s a little generous right now, but you never know how injuries, COVID-19, and the general changing landscape of the American League will affect the early-win loss totals. 65 wins should be the bare minimum standard based of a paltry .376 win percentage a year ago