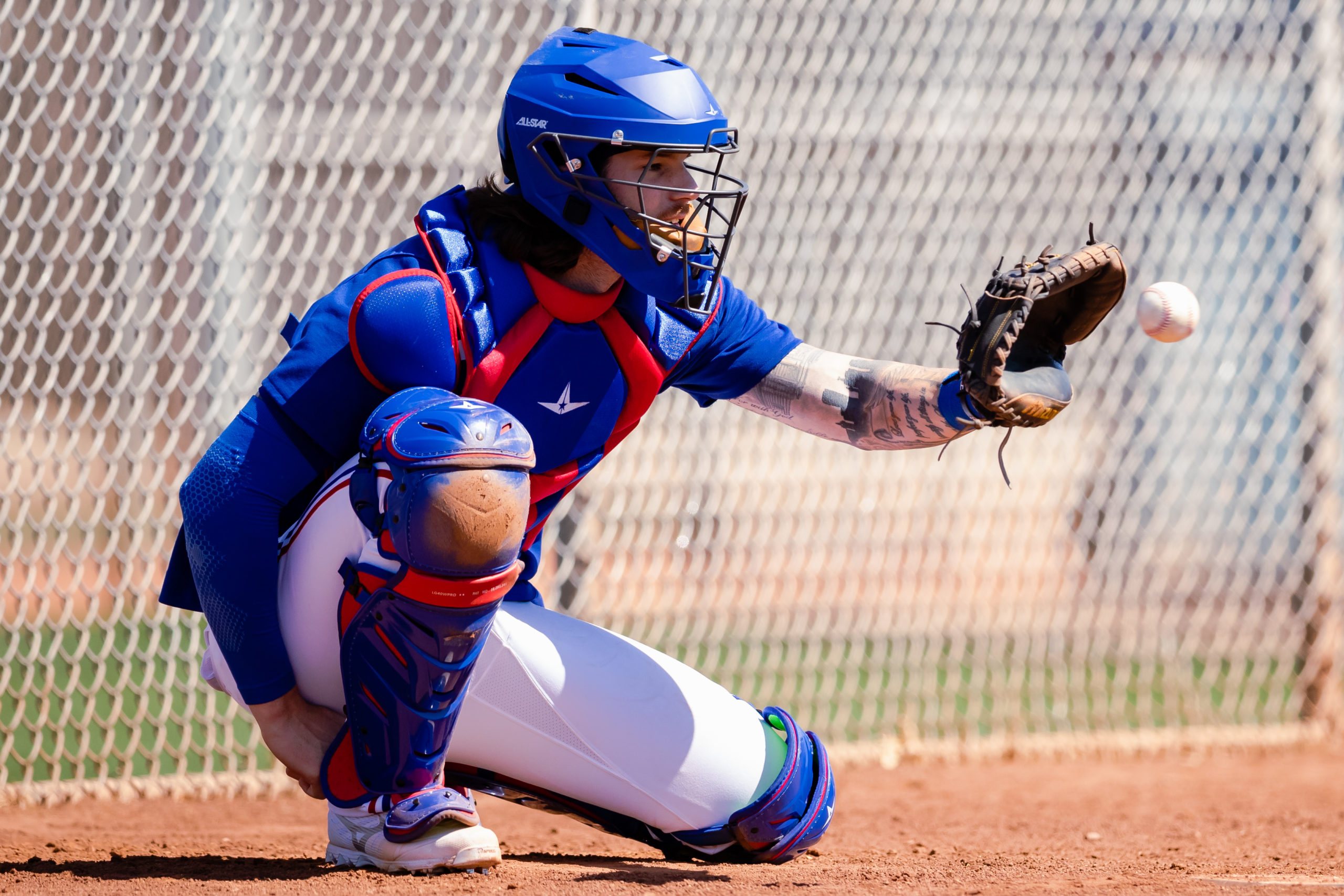 Jonah Heim is getting a taste of being an everyday catcher in the major leagues. In early May, the catching portion of Mitch Garver’s year ended because of an eventual season-ending injury, and the Rangers inserted Heim as the primary everyday catcher. While Heim had a decent July (that ignited three days of rest with the All-Star break), his August suffered.

“You can’t really prepare in the offseason to catch as many games, so it’s like a living [and] learning situation,” Jonah told me. “I feel like I lost maybe a couple of pounds here and there [and] maybe right after the break. But put it back on [and] it’s going well. [It’s] a lot of rest, recovery, [and] I try to eat as much. It’s going good,” Heim finished when I asked about adapting to the starter role.

In August, Heim started 19 games and came into relief once. He caught 169 innings in August alone, catching three straight games once. As a backup catcher, there’s more rest involved. Therefore, if the primary catcher goes down for two weeks, the backup is fresh enough throughout the season to withstand those two weeks when the primary guy comes back. I asked Bobby Wilson, the Rangers catching coordinator, if he’s noticed fatigue from Heim. “I think understanding how to be able to catch this many games is tough,” Bobby Wilson said. “But I wouldn’t say that, I mean, he’s getting fatigued, but every catcher goes through it. I’m not really too concerned about it right now.”

One person that Heim has been able to turn to is Mitch Garver. Yes, Garver is out for the season, but Mitch has been around the team and has the everyday catcher experience. “We have conversations about that pretty much every day,” Heim told me. “He’s got to remind you that catching this many games is hard on your body, and I kind of joke about him that I haven’t hit a home run in a while. [Mitch] is like, it’s tough on the body [and] your swing slows down a little bit.”

It’s not only about having Garver for everyday role advice but also having another catcher’s mind in the mix for ideas. Bobby Wilson said it’s a healthy debate on certain things. “I openly welcome that because I think it pushes us to be better,” Bobby said. For example, aspects during the game could be giving Heim thoughts on how pitches are used and if changes are needed. “Mitch will see that stuff at times when my head, specifically, [is] spinning with everything else we have going on,” Bobby Wilson said.

“He’s got great advice. He keeps it into perspective for me because I can be a little hard on myself, and that brings me down to earth,” Jonah said.

From the pitching perspective side, Heim has done an excellent job working with the pitching staff throughout the year. Notably with Martín Pérez, who got a late start in Spring Training and already had worked with Mitch Garver in his days with the Twins.

I asked Dane Dunning about the progress Heim is making, and Dane mentioned the chemistry between Jonah and the pitchers. “Martín and Jonah have been having a great. I mean, great duo together, just like you’re on [the same] page the whole time. And for the most part, John and I have been the same thing.”

Dunning mentioned Jonah’s calmness when he’s behind the plate, and if a pitch isn’t working and the pitcher flusters, it’s about finding that other pitch to get back on track. “So if you’re not laying your sinker, [Jonah] is like alright, let’s start working on something else to be able to get you back on,” Dunning said. In those instances, it’s not about losing confidence. It’s about how the starter’s pitches feel each outing they take the mound. “It’s more of fatigue, the long season, and maybe their stuff doesn’t feel as good as it does one day, and it’s not moving as it was the other day,” Heim said. “Confidence is never an issue with those guys.”

So what is the goal for Jonah Heim in the next month? Well, Bobby Wilson pointed to three things, staying healthy, finishing the year strong, and building on his leadership skills along with his ownership of the position and taking care of the pitching staff. On the surface, Heim doesn’t appear as a vocal individual. However, there’s more to that. Leadership isn’t talking with rookies, making speeches in the clubhouse, or speaking up all the time. Leadership can be about going out on the field and giving it one hundred percent, no matter the circumstance. That’s the aspect Bobby Wilson told me he saw. “It’s not objective information, but it’s something that you see as a coach, teammate, [and] a peer that you respect.”

“He’s learned what it takes to get through a full season. That’s the first step of the progression, understanding how to get through it, what it takes, what you have to do to increase workload.” “It’s recovery, weight training, keeping the weight on, and all that stuff. It’s not just playing.” Jonah is learning physically what is needed to take the next foot forward, but now it’s about enhancing that leadership aspect. “[Jonah] ‘s physical tools are good, but what’s the next level for him, and that’s truly being the general on the field, the manager on the field that he can do it by example, and everybody follows. That’s the next step,” Wilson said.

With Mitch Garver under the Rangers’ control in 2023, the signs point to Mitch being the main guy behind the plate and Heim the backup. The Rangers want to see that growth from Heim, and Jonah said it’s about playing more and producing. “I expect to produce and be good for the team. Sometimes when that doesn’t happen, I get a little upset, but I think my swing feels still feels as if it’s spring training and just trying to find the consistency and put up good at-bats,” Heim said. Jonah is thirteen games away from the most played in a season in his professional career.