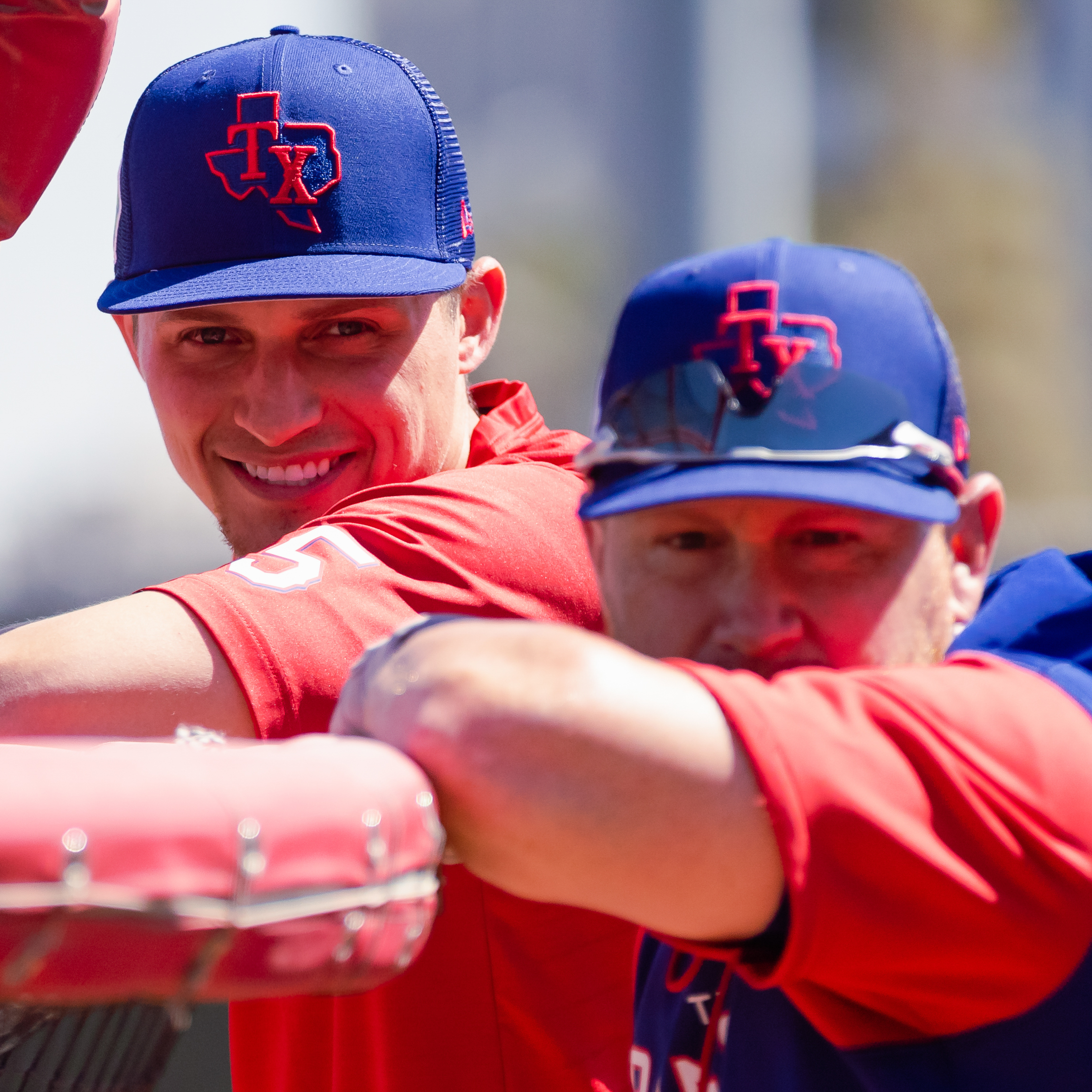 “They’re a little different, [but the] same mentality when it comes to how they play the game,” Rangers manager Chris Woodward said to describe both Corey Seager and Kole Calhoun. In the offseason, the Rangers recruited both during the pre-lockout frenzy, and while they haven’t been teammates in the Major Leagues until 2022, they’re good friends. “[Seager and Calhoun are] funny together,” Woodward said. “They talk a lot of smack to each other.”

In 2015 (drafted in 2012), Corey Seager joined the Dodgers while Kole Calhoun was in his fourth year with the Angels. Seager’s tenure with Los Angeles lasted until last season, while Calhoun spent the previous two seasons with the Arizona Diamondbacks. Therefore, they frequently saw each other in opposite dugouts for the past seven years. In 2022, they reside in the same dugout with their lockers next to each other in the clubhouse. “We’ve known each other for quite a while, too,” Kole Calhoun said. “We’ve hit together in the offseason for the last couple of years.” While the end goal is the same for both, their styles differ. “One is more outspoken and boisterous than Corey, who doesn’t say as much, but he does say stuff,” Woodward said. “[Corey] has been getting a little more vocal, but Kole wears it out in the open with everything he does.”

The dedication and approach each day that Corey Seager has is an aspect that stands out to Kole Calhoun. “I know he’s extremely dedicated to what he does, and he’s going to put the work behind the scenes,” Kole told me. “His track record speaks for itself.” While Woodward mentioned Corey being more vocal, it stems from having conversations with teammates more so than a manager being vocal to a group of his employees, as an example. “[It’s] establishing who he is as a player. He wants to perform first and foremost. That’s his duty to this team is to perform,” Woodward said.

It’s been a slower start for Corey Seager than most would desire, but he showed signs of getting back on track with three home runs and three walks during a four-game homestand. “It’s been a challenge for [Corey]. He’s always been on an elite team,” Chris Woodward said. “We got off to a slow start, and I had my eyes wide open to see how he would handle that. I know the kid really well, but at the same time, it’s a good challenge for [Seager].”

Of course, we’re only two months after the lockout ended and teammates are still getting to know each other, including their personalities, what they’re comfortable with, and their styles. “I don’t pressure these guys to come up and lead the clubhouse right away. I don’t ask them to do that in a way that they’re uncomfortable,” Chris Woodward said. “Going through a little adversity, in the beginning, I think it’s good for [Corey]. I’m going to go about my business the same way every day. That’s what I demand with you guys.” The leadership that Corey Seager is bringing shows in the everyday lead by example process rather than I’m going to have high intensified conversations if I feel something isn’t right.

For Kole Calhoun, the intensity and ardor he brings sticks out to Corey Seager. “The energy level [and] effort level he plays with,” Corey told me. “He’s always on goal, trying to attack, [and] always trying to win. [Kole] is doing anything he can to try to take an extra-base [and] make a play in the outfield to help your team win that night.” On the Rangers’ win Tuesday, Kole Calhoun made a game-saving diving catch to where he got up and looked like he let out a massive yell to the ground. It’s that intensity that Seager mentions is essential to a clubhouse. “It rubs off on everybody,” Seager said. “You see somebody putting that much effort in; you don’t want to get left behind. It steps up your game and everybody’s game, and it doesn’t go unnoticed.”

Calhoun is starting to heat up at the plate. Entering Saturday, Kole is 8 for his last 23 at-bats before starting the year 9 for 60 and defensively making an impact. “I haven’t done a whole lot yet, this year, and getting those two RBIs in the first inning was big for the team [and] for me personally,” Kole said after Tuesday’s 6-4 win over the Royals. “Then being able to make a play on that ball in a two-run game in the ninth inning brought some excitement. I want to go out there and win [and] I want to help this team win. I actually brought something to the table there on both sides of the ball.”

“He’s felt good for the last week or two,” Chris Woodward said after Friday’s game. “Had an unlucky run for about a week where I felt like he hit everything over one-hundred [MPH] but got out every time. Hits are starting to fall, and we need that right now. We need him to be productive.” In their last eight games, the Rangers’ offense scored seventeen runs, with Kole responsible for scoring or driving in five of the seventeen runs.

While Calhoun and Seager have known each other for a while, have they picked anything up from each other? “Not necessarily,” Kole Calhoun said about Corey Seager. “He’s dedicated to what he does and believes in what he does and doesn’t get too far away from that.” But, for Kole’s external intensity and passion, Corey Seager says it does rub off on him and everybody else. “It fully ingrains more mindset in you,” Seager said. “It’s showing up every day, no matter what’s going on, and trying to do any little thing you can do to win a game. That carries over to everybody.”

The Corey Seager and Kole Calhoun duality is an aspect that benefits the clubhouse in multiple ways. Think of working in an office and having two different managers. Their styles differ, but it’s effective one way or another. In addition, they both fit the Rangers’ culture the club spreads. “They’re awesome because they set the tone [with the] mentality we have every day,” Woodward said. I wouldn’t so much call it Batman and Robin, but hey, going with Corey and Kole has a nice touch.

Asked Kole if there were any memories prior to this year with him and Corey. Said nothing crazy, though told me this gem which wins quote of the day. I love it! #StraightUpTX #Rangers pic.twitter.com/WUzoMGDwWF