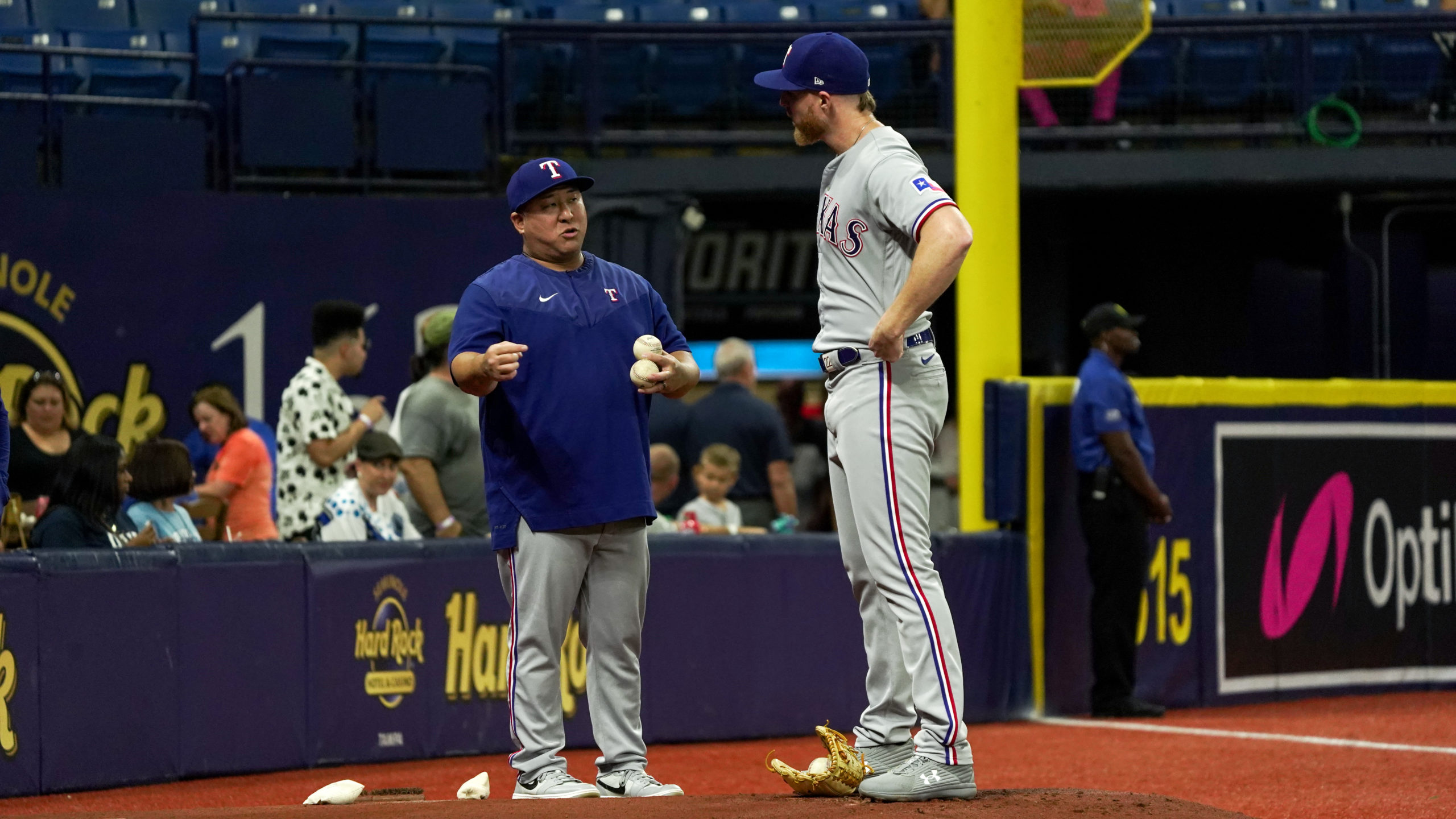 “I don’t think I’ve ever been on a team with that many lefties, ever. It’s crazy [and] built in a good way like that. [The Rangers] are fortunate to have all those guys because [of] the type of talent they are.” That was Rangers reliever Matt Moore when I asked him if he’s ever been a part of a team with the amount of left-handed talent the Rangers have. The Rangers cycled around left-handers at the Major League level throughout the season. Taylor Hearn started in the rotation and is now a multi-inning reliever. Moore is a late-inning lefty that can give a manager multiple innings if needed. Brock Burke has put up great numbers in his first full Major League season as a multi-inning reliever, and add John King to the mix, a three-inning pitch to groundball lefty, and the Rangers stack up with southpaw talent.

“It’s a rarity,” Rangers Co-Pitching coach Brendan Sagara said when I asked about the number of left-handers in the bullpen. “It helps us a lot with evening our splits. It’s almost a 50/50 split righty, lefty, and the capacity for them. They will go multiple innings, and they’re all even split performers. That helps with as far as in-game strategy. How good have these four left-handed length bullpen pieces been for the Rangers? Rangers’ lefty relievers have thrown fifty more innings than any other team and faced over 220 batters more than the Rays. It’s a lefty reliever group that ranks top ten in ERA and 8th in BB/9 (3.2). Bottom line, the left-handed core of relievers by Texas has been top-ten material. Here’s a look at all four of the primary multi-inning relievers:

Taylor Hearn has had one of the more rocky rides of 2022. He was the Rangers’ home opener starter but moved to the bullpen as he struggled in the rotation. Since the move, Hearn has been thriving in the bullpen (3.75 ERA through inflated due to Friday’s outing vs. Cleveland). “Overall, it was a good year,” Hearn told me. “I finished the year healthy, and my stuff I worked on really paid off. So, definitely a successful year for me.” In addition, Taylor told me he improved with his slide and threw his four-seam fastball more (before August, he used the fastball about 50% of the time, now uses it 60-70%).

So with Taylor, is the bullpen his role for next season? “With Taylor [what] we’ve seen this year, he’s better suited for the bullpen. I think that’s where we see him at least next year, helping our club the most,” Chris Young told me. It’s a fair assessment, and the work Hearn is putting in throughout the season appears to be paying off for Taylor and the Rangers. The question is if a back-end of the pen reliever suits Taylor or his current role as a left-handed multi-inning reliever.

It isn’t easy to decipher between Burke and Moore on a better season out of the bullpen. Certainly, Brock Burke makes his case for the club’s reliever of the year (and MLB’s rookie reliever). Burke allowed 16 earned runs in 51 appearances striking out 89 in 81 innings. The walks have been a minor issue, but Burke has been reliable as they come out of the Rangers bullpen. “It’s been good so far,” Burke told me on his season assessment. “It’s been nothing I could imagine, and being able to take the role to the bullpen from the starters, it’s been a lot.” Burke leads all MLB relievers in innings pitched.

Burke had to adapt to the bullpen role this offseason after starting his entire minor league career. He told me it was a little more complicated than he thought, but once Brock got into a routine with help from the veterans, he got acclimated to the role. “It’s something I’ve never done in my career and something I couldn’t imagine doing what they do, and to be able to have success out of the bullpen as quickly as I did was cool. To be able to adopt to that role, it’s nice,” Brock told me. Burke’s 81 innings is the most for a rookie reliever this season an his 1.78 ERA leads all rookies (whose pitched in 14 games or more).  Burke transitioned to a force out of the bullpen.

Blink and you'll miss this double play! What a QUICK turn by Brock Burke!

I’m biased here, but if I had to pick one player that turned around a bad season one year and went to a good season this year, Matt Moore is my guy. Moore is a back-end bullpen guy who can give two innings if needed. Moore told me he’s been comfortable in the bullpen in 2022 compared to previous years. “It was never the first option heading into the season. I was always a starter in the times I wound up in the bullpen due to lack of performance,” Moore told me. “I wasn’t exactly enjoying myself down there. But now, I’ve been able to work myself into a role where we’re pitching more often, so it’s a lot easier to enjoy myself.”

Matt Moore provided insight into what stood out regarding the bullpen and its potential. “The raw ability of a lot of guys like Taylor and Brock, but the variability is at the surface right now,” Matt said. “When Joe Barlow’s finger gets better, [Brett] Martin is kind of like the veteran of those young guys, and with Jose and Dennis, but it’s a bright point.” In addition, Moore talked about when the club puts out more traditional roles; the bullpen group will flourish. “[Two/three] inning stuff is hard to maintain over the course of the season. It can handcuff you at times because you want to use a guy, but you need him for the next day, and it’s not always the best way to help your guys get the best out of them.”

John King has had a roller coaster 2022 season more than any other lefty-length guys. First, he had a great May, then things deteriorated in June, and he is putting it back together in September. “[I] worked on posture stuff and not be so hard on myself. I worked on stuff mechanically in Triple-A and then also doing some mental stuff,” King told me about what changes he made from his last stint in Round Rock. King mentioned his Round Rock veteran teammate, James Jones, who helped him with the mindset of playing more freely and enjoying the environment. You may remember James Jones in 2014 and 2015 as a utility outfielder with the Seattle Mariners.

For King, it’s about the mantra of what happens, happens. “The only thing you control is your preparation, how you got about everything once the ball leaves your hand. It’s being intentional on handling that every day and enjoying it.” The mindset works as John King threw four two-plus inning outings in September. In the month, King induced a 64% groundball rate, 8th in Major League Baseball among left-handed relievers and 16th in MLB among relievers. “I don’t really look at roles. They ask me to go out there and compete, and I’ll compete if it’s for one inning, one out, or three innings. I take it pitch-by-pitch, and the outcome is the outcome,” John told me.

As for next season, it’ll be interesting to see if the Rangers re-sign Matt Moore. I think it’s a good bet Taylor Hearn will keep his role as a multi-inning reliever and John King (a Spring Training competition between the two). For Brock Burke, the Rangers may integrate him as a starter, depending on how the winter goes. The starting pitching free agency pool is huge and with the young talent in the Texas farm system, there are trade options.

An internal candidate for starter is Brock Burke. However, the starter role isn’t on Burke’s mind, but he’s not ruling out striving to be a starter. “I told myself I’m not going to think about it until the end of the season,” Burke said. “I’ve heard the last two weeks of the big league season are the hardest, and here we are the last two weeks. I want to see how my body reacts to being in the bullpen for the whole season before I make that decision.” Chris Young said to me that the Rangers are keeping an open mind and visiting with Brock in the off-season. Add that to free agency, we might be in for a wild ride this offseason.