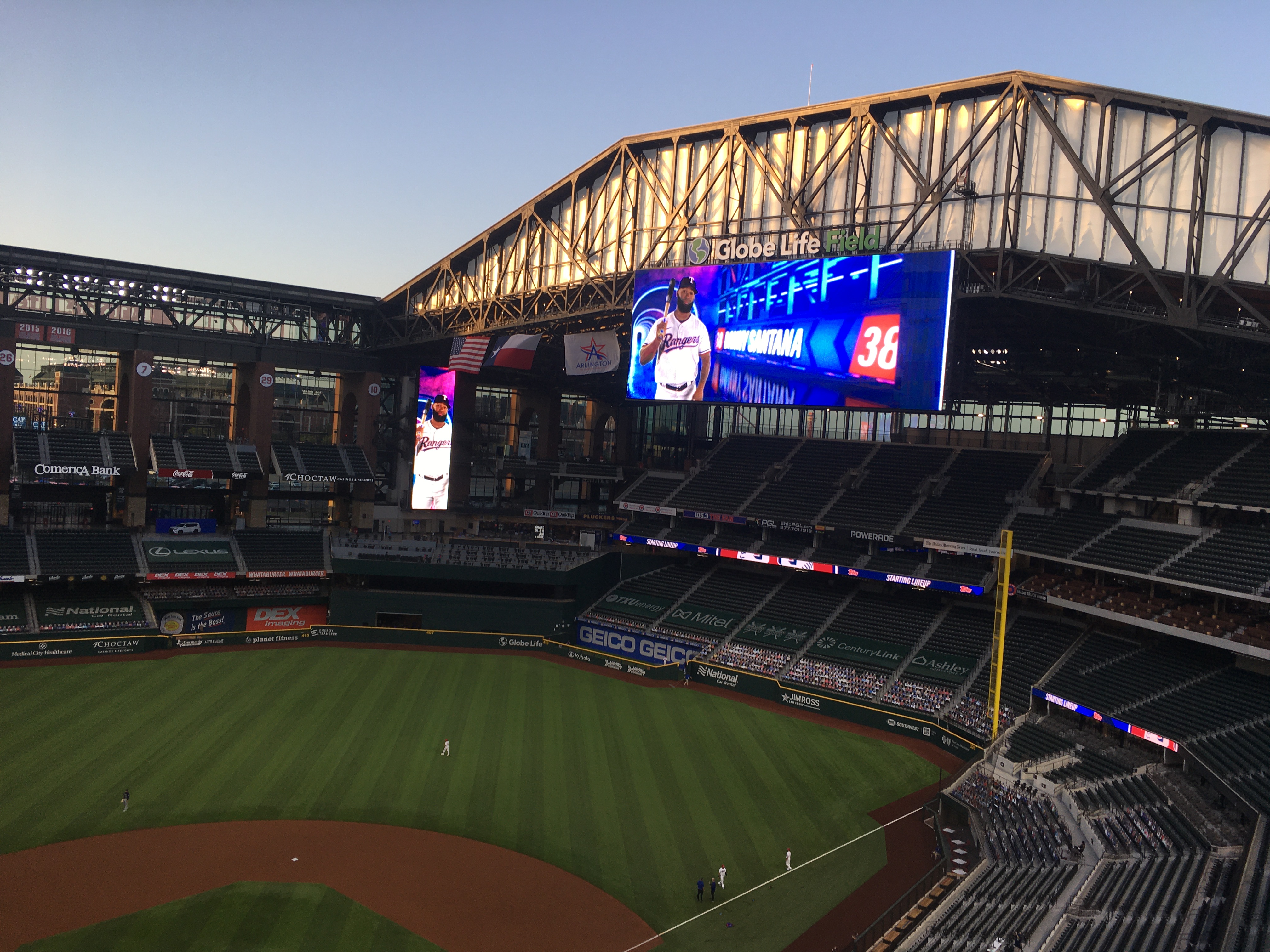 The Rangers made a splash on Wednesday afternoon when they announced that Globe Life Field will be open at 100% capacity for two exhibition games at the end of March and then the home opener on April 5th.

This comes on the day when the governor’s decision to open businesses and lift the mask mandate across the state. The Rangers haven’t hosted fans for a home game of their own since the finale of the 2019 season at Globe Life Park, but of course the new Globe Life Field hosted a limited number of fans throughout the NLCS and World Series last fall.

What was your initial reaction to the news the Rangers will open Globe Life Field with 100% capacity for their home opener next month?
Corey Douglass: My initial reaction to the announcement was “look at the Rangers reaching to get the opening day money.” That reaction is led by the reputation this ownership group has of not really caring about baseball side of things and more about the money involved. I find it very hard to believe they will be able to enforce 45,000 people to follow the mask mandate especially being that the state itself no longer requires you to wear a mask.

Dylan Duell: I was surprised but not shocked, if that makes sense. I know that the team has sold all of the tickets for Opening Day and that’s been the case for over a year, but I still found it really troubling that they opted to allow full capacity right away. It’s obviously not the “right” thing to do YET. It could be in a few months with thousands and thousands of vaccines being given out across the Metroplex every day, but we’re just not there yet. Ultimately, the team was in a no-win situation, but they went with the PR nightmare option.

Darien Clark: I honestly saw this one coming. Did I think it would solely be for Opening Day? No. To me, it seems pointless. If you’re going to allow 100% one game, why not do it for them all? I knew as soon as ownership got clearance from state and local governments, they would capitalize on the opportunity to make money and Opening Day surely provides that opportunity.

Lexi Saldivar: I wasn’t surprised. Not one bit! I saw this coming from a mile away. They had already hosted graduations and other various events while things were “shut down” – it was bound to happen. Money talks – and having those seats open at 100% capacity on Opening Day – in a new stadium is revenue city. With Texas opening up 100% – everyone that’s been itching for live sports will pay whatever they need to – in order to fill one of those seats. On Opening Day, to say the least.

Do you think that any other teams (possibly down I-45) will follow suit now that the Rangers have gone out and done the thing other teams might have been afraid to do?
Corey: I do feel that most teams around the league will have fans in their stadiums this season. I don’t think all teams will have 100 percent capacity just because i think it’s a little soon for that. 40-50% is where I see most teams capping it.

Dylan: As much as we like to voice our displeasure over the Rangers ownership group, Jim Crane of the Astros is probably the ultimate villain in baseball and I wouldn’t be at all surprised to see them have a similar announcement in the coming days.  I don’t think any other teams will open their stadiums to more than 50% across MLB when the season opens up in three weeks.

Darien: Obviously most teams will consider state and local regulations above their own thoughts and desires, so I do believe the teams that are able, will follow suit to the Rangers. Especially the other team in Texas. I’m with Corey though – I do vision nearly all MLB teams allowing fans, but capping that total right around 50%. It’s a safe and reasonable amount fair to just about everyone’s views.

Lexi: I think other teams will allow fans in their stadiums but surely not at 100% like the Texas Rangers. – I agree with Corey. I think it’s way too soon, not everyone is ready to go back to “normal” masks are enforced in other states and Texas laws don’t apply the same way when traveling for away games. The team down I-45 just MIGHT follow suit with the Rangers to keep up with the hype of re-opening. We’ll see! It’s definitely going to be interesting to see what route other teams take.

Price, politics, anything too personal aside, when will you be comfortable with attending sporting events again?
Corey: Honestly, I am in a pretty good spot about attending sport events and being out in public a little more. I’m not rushing out to be around 40,000+ people or anything, but I do see myself at a couple of Rangers or Mavs games as a fan in the near future.

Dylan: I bought a ticket plan for 2020 at Globe Life Field with the main reason being that I wanted to be at the first opening day at the new stadium. So with that plan transferring over to 2021, and with my second dose of the vaccine going to be in just two weeks, I will make myself comfortable enough to mask up and head to the stadium for the home opener. I’m not totally comfortable with it, but I’m willing to take the chance for this once in a lifetime experience.

Darien: As a vaccinated and self-proclaimed responsible citizen of Texas, I do see myself heading out to the ballpark very soon. I will not be one of the 40,518 fans on Opening Day, however, you can see me in the stands shortly thereafter. Yes, with peanuts, crackerjacks and my mask coming on and off as I devour them.

Lexi: I know I’ll eventually be attending sporting events, and Rangers games regularly. I’ve been going out a little more lately. Still on the fence about Opening Day – just because I know the madness that comes with that, and the crowds. I’ll definitely be keeping my mask on. I feel like once I’m vaccinated, I’d feel a little better being in a crowd of people not wearing masks at full capacity.