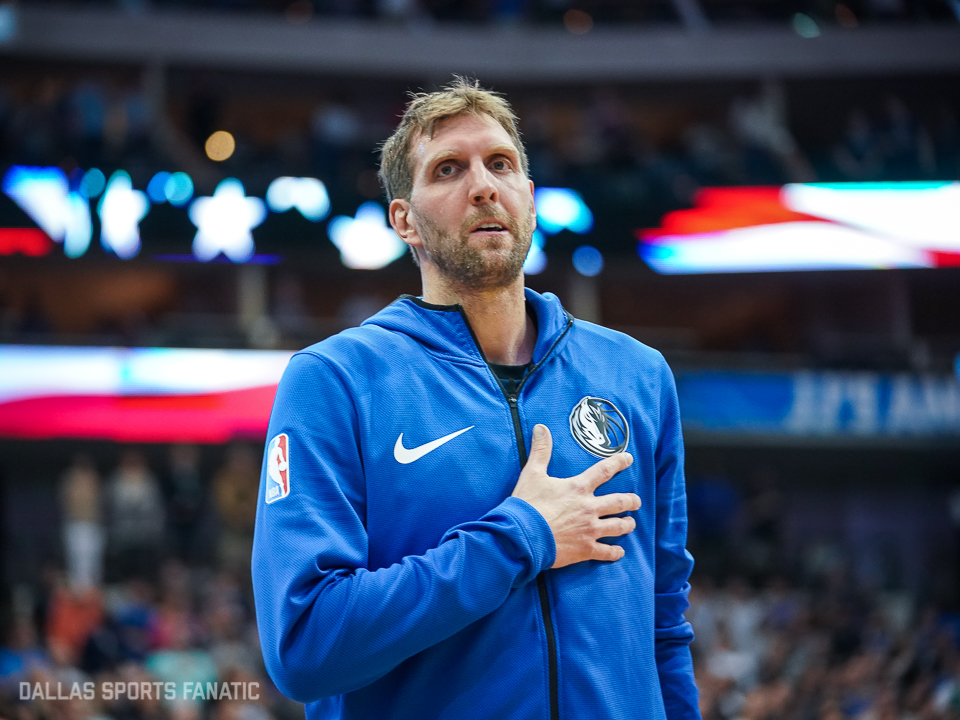 Who were Dirk’s most frequent running buddies during his Mavericks career?

Who were Dirk’s most frequent running buddies during his Mavericks career?

Facebook memories are often a reminder of your exes, friends you never talk to anymore, or maybe even a time that you used to structure your status as “*insert your name* is feeling bored.” Really just cringe-worthy material.

Sometimes, though, it provides you of a reminder of great sports memories from your past. Yesterday I was reminded of something silly I posted back on Halloween 2014.

What a truly epic combo Dirk+Parsons turned out to be on the court… "nahht!"@MatthewDuell and I were about as lethal of a duo when we used to play two on two. pic.twitter.com/PCeb2W8IcD

Yes, I bought a Chandler Parsons jersey. Honestly, I think it’s the only jersey I’ve ever bought with my own money. I’m a baller on a budget, so “shirseys” are the way I usually went. I also got it signed by him when he was signing autographs at an Academy in Plano. I was pumped about Chandler Parsons. We all have things we’d like to take back.

Well dwelling on the disappointing two seasons of Chandler Parsons in a Mavs uniform got me thinking about how many wins did Parsons and Dirk Nowitzki rack up together in those two years. I stumbled into the very interesting “Teammates and Opponents” page on the incredible basketball-reference.com. This page knew exactly how to answer my question. Dirk and Parsons played 120 total games together from 2014-2016 and compiled an unexciting 64-56 record.

Now I’ll share with you the top ten and include both their total number of games (regular season and playoffs combined) and the combined winning percentage in their games with Dirk. Hardly any surprises, but maybe not in the order you’d expect.

*Note: the guys whose Mavs tenure preceded Dirk’s arrival in 1998 are still just noted as starting in 1998, since we’re only talking about games played with Dirk.

10. Jason Kidd (2008-2012): 344 total games/.631 %winning percentage (fourth among top ten)
Kidd came back to Dallas for a second stint at age 34 and was very durable in his five seasons in Dallas from 2008-2012. The Hall of Fame point guard played in 46 playoff games with Dirk and obviously being a part of the 2011 title team helped boost that. Those 46 games are tied for seventh with Jerry Stackhouse when it comes to most playoff games played with Nowitzki.

9. Shawn Marion (2009-2014): 362 total games/.610% (seventh among top ten)
Marion, another member of the 2011 title team, made the playoffs in each of his five seasons in Dallas. However, he finishes 12th when it comes to players with most playoff games with Dirk (38) because that title season in 2011 was the only season the Mavericks made it out of the first round during Marion’s time in Dallas.

7. Erick Dampier (2004-2010): 469 total games/.661 (third among top ten)
The first of two underwhelming big men on this list, Dampier played on a good Mavericks team each of his six seasons in Dallas. His high winning percentage is thanks to playing on the now infamous 67 win team in Dirk’s MVP campaign in 2006-2007. He was also a member of the 2006 Finals team. The first season after Dampier leaves Dallas? They make the Finals with Tyson Chandler in the middle instead.

6. Josh Howard (2003-2010): 473 total games/.662% (second among top ten)
This guy should’ve been arguably the second best player on a championship team in 2006. Instead, the Mavericks blew their 2-0 series lead against Dwyane Wade and the Heat and Howard’s time in Dallas ends with a series of controversies. Howard would play 543 total NBA games with four different teams, but only 70 of them would come after he was traded from the Mavs in February 2010.

5. Shawn Bradley (1998-2005): 510 total games/.598% (ninth among top ten)
Bradley was with Nash, Dirk and Michael Finley for the first couple years of non-playoff basketball in Nowitzki’s career. My main memory of Shawn Bradley in a Mavericks uniform:

Dirk probably could’ve done a little more to keep McGrady contained on the perimeter and saved his teammate from being basically remembered as a poster.

5. Michael Finley (1998-2005): 524 total games/.611% (sixth among top ten)
The reliable scoring guard who handled being “the guy” until Dirk truly grew into being “the guy” for the late 90s and early 2000s Mavericks, Finley is one of the most important players in franchise history and has of course turned that into a role in the front office today.

His total number of games played could certainly be higher, but he missed at least ten games in each of his final four seasons in Dallas.

Barea played just 33 and 44 games in his first two NBA seasons as he was a part-time Maverick and part-time Fort Worth Flyer trying to prove his worth to then-coach Avery Johnson. Of course he then thrived under Rick Carlisle and his usage of the three-guard lineup along with Jason Kidd and Jason Terry. Then he left in free agency after the Mavericks won the title in 2011 before eventually returning at the start of the 2014-2015 season.

Barea’s second stint with the Mavericks has been filled with some bad teams (hurting the winning percentage greatly) and then he has battled plenty of injuries over the last several years. He only played 35 games in 2016-2017 thanks to various calf injuries and then he missed basically the entire second half of Dirk’s final season in 2018-2019 due to his terrible Achilles injury.

Even with his forgettable stint in Minnesota tossed aside, there were a lot of games left on the shelf with Barea.

2. Devin Harris (2004-2008, 2013-2019): 608 total games/.602% (eighth among top ten)
Another guy who easily could have been number one if not for injuries. Harris played ten seasons in Dallas, but only started and finished eight of them thanks to his inclusion in the Jason Kidd trade in 2008 and the deadline deal that sent Doug McDermott to Dallas in 2018 (yeah, remember that?).

Trades aside, Harris was never a beacon of health throughout his career. In his eight FULL seasons in a Mavericks uniform, he averaged just about 66 games per year thanks to him consistently being nicked up.

While he’s not exactly who everyone thinks of when they think of key Dirk teammates, he was there for a ton of Dirk’s most iconic (and unfortunate) moments outside of the 2011 title run. The 2006 Finals appearance, the 2007 first round upset by the Warriors, he had the assist on the basket that got Dirk to 30,000 career points, and he played plenty of minutes in Dirk’s emotional final two games in 2019.

Terry never missed more than eight regular season games in his eight seasons in Dallas and missed less than three games in six of the eight campaigns. They say the best ability is availability and Terry was always there for Dirk. Never a bigger example than back on June 12, 2011 when Terry led the Mavericks with 27 points in their title-clinching game while Dirk shot an abysmal 1/11 in the first half.

So there you have it. The three players who Dirk Nowitzki played the most games with in his career were all guards under 6-3. While Terry certainly has the best argument of any of them, none of them will be Hall of Famers, but they were rocks for Dirk throughout his legendary career.

In case you were wondering, the guy who’s played the most games with new face-of-the-franchise Luka Doncic through his first two seasons is Dorian Finney-Smith with 135. Dirk and Luka were both active for only 42 games together in 2018-2019, but those images of them together were pretty awesome and will stand the test of time. 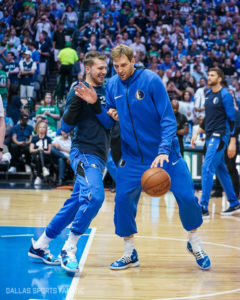