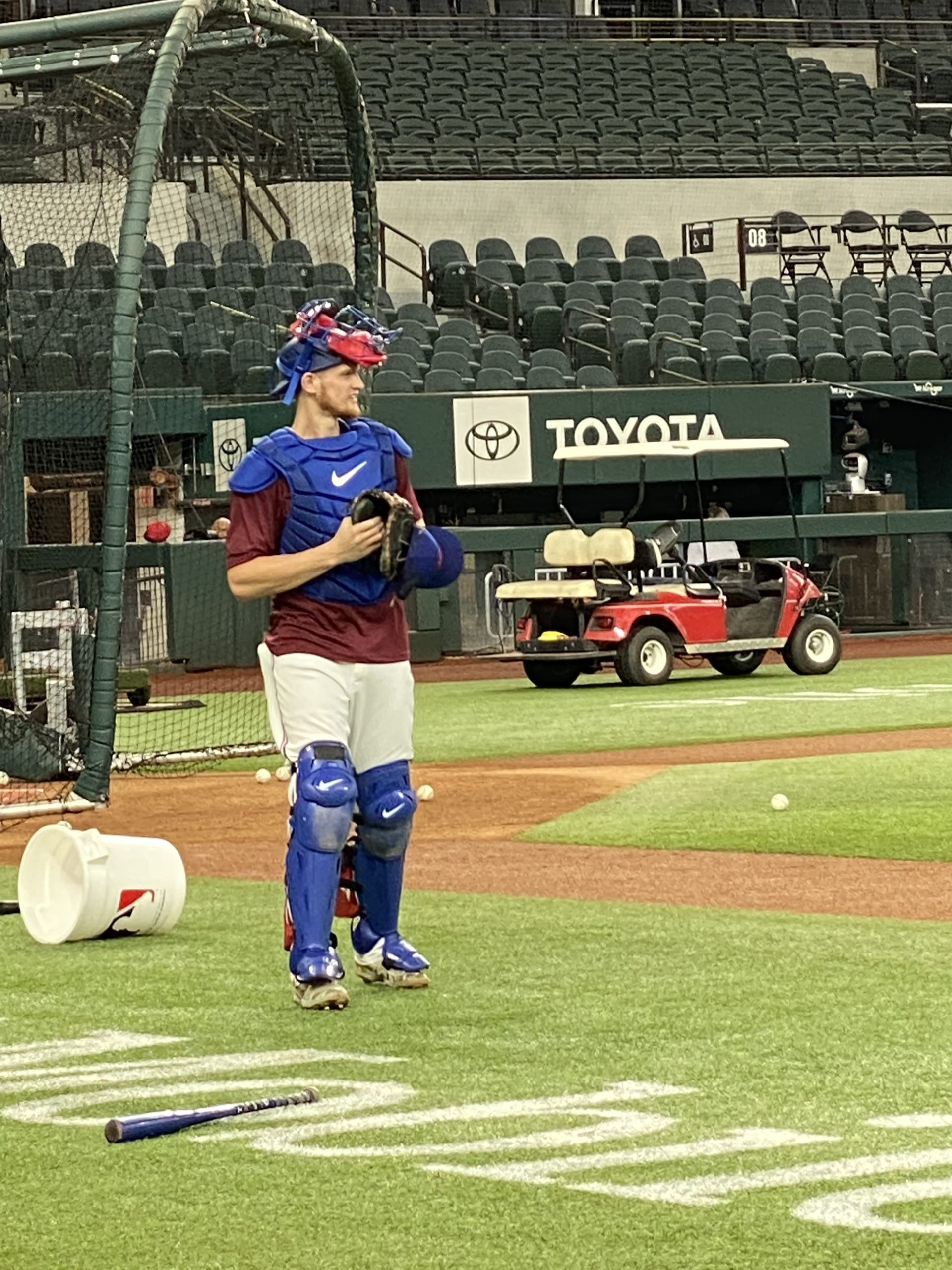 The Rangers begin a three-game series against the Cleveland Guardians at Progressive Field on Monday. For one specific Texas Ranger, it’s a return to a place that defined his young career. Texas catcher Sam Huff will always remember the 2019 Future’s Game at Progressive Field (the last time Sam was in Cleveland). At the time of the announcement, Sam was with the Down East Wood Ducks, managed by now Rangers’ first base coach, Corey Ragsdale. “I went 0 for 5 when I got told this,” Sam said. “Ryan Dorow and Leody Taveras both got called up to Double-A, and I was thinking, oh why am I going to Double-A? I went 0 for 5 with five punchies.” Little did Sam know, it wasn’t the Double-A call-up. Instead, it was the invitation to the Future’s game.

Harold was not the only Seattle Mariners star too keen on Sam Huff’s power. Enter Ken Griffey Jr. “I finished my second round [and] I start hitting the ball a little better, more gap to gap. It was my first time hitting big league baseballs too, so the ball was flying,” Huff said. Sam said he heard someone shout “Ken!”, baffled by who that was. Then Ken Griffey Jr. walked up to Sam. Huff introduced himself, “I’m like nice to meet you, Mr. Griffey. He’s like, call me Junior.” Griffey Jr. added, “Man, you got old-school power. What are you doing?” Sam told Griffey Jr. that he was trying to hit a single, and Griffey Jr.’s response was him laughing. “[Griffey Jr.] ‘s like you got some power, bro, that’s awesome power.”

The American League Futures are down 2-0. Ken Griffey Jr., Sean Casey, and Jim Thome came up to Sam Huff, calling a home run for Huff. “They all came out and [said] you’re going to do something big here, man, you’re going to hit a home run, you’re going to do something big in this game.” Sam’s response was a chuckle, “okay.” It’s the seventh inning, Jo Adell walked, and Sam Huff steps to the plate. He took a Ben Bowden changeup but then got a Bowden fastball where Huff launched it to left field, nearly hitting the Miller Light red dot. “That’s what defined my career,” Huff said. Sam said he doesn’t keep in touch with Thome, Casey, or Griffey Jr. much, but when he sees them says hello. Huff said he saw Sean Casey in Arizona. They exchange pleasantries. Sam’s parents watched Harold Reyonalds when he was in Seattle along with Ken Griffey Jr. therefore, to talk with them, have them notice Huff’s abilities, and forge a piece into Sam Huff’s career is irreplaceable. “It was cool. Not a lot of people get to do that.” Huff won the 2019 Future’s Game MVP that evening too.

Now Sam Huff is one of the vital parts of the Rangers roster. Even though Huff has one career plate appearance at Progressive Field entering Monday, he will treasure that plate appearance his entire life. “[It] kind of got me to where I’m at, but it was a piece of how I did it, and still to this day, I love Cleveland.”