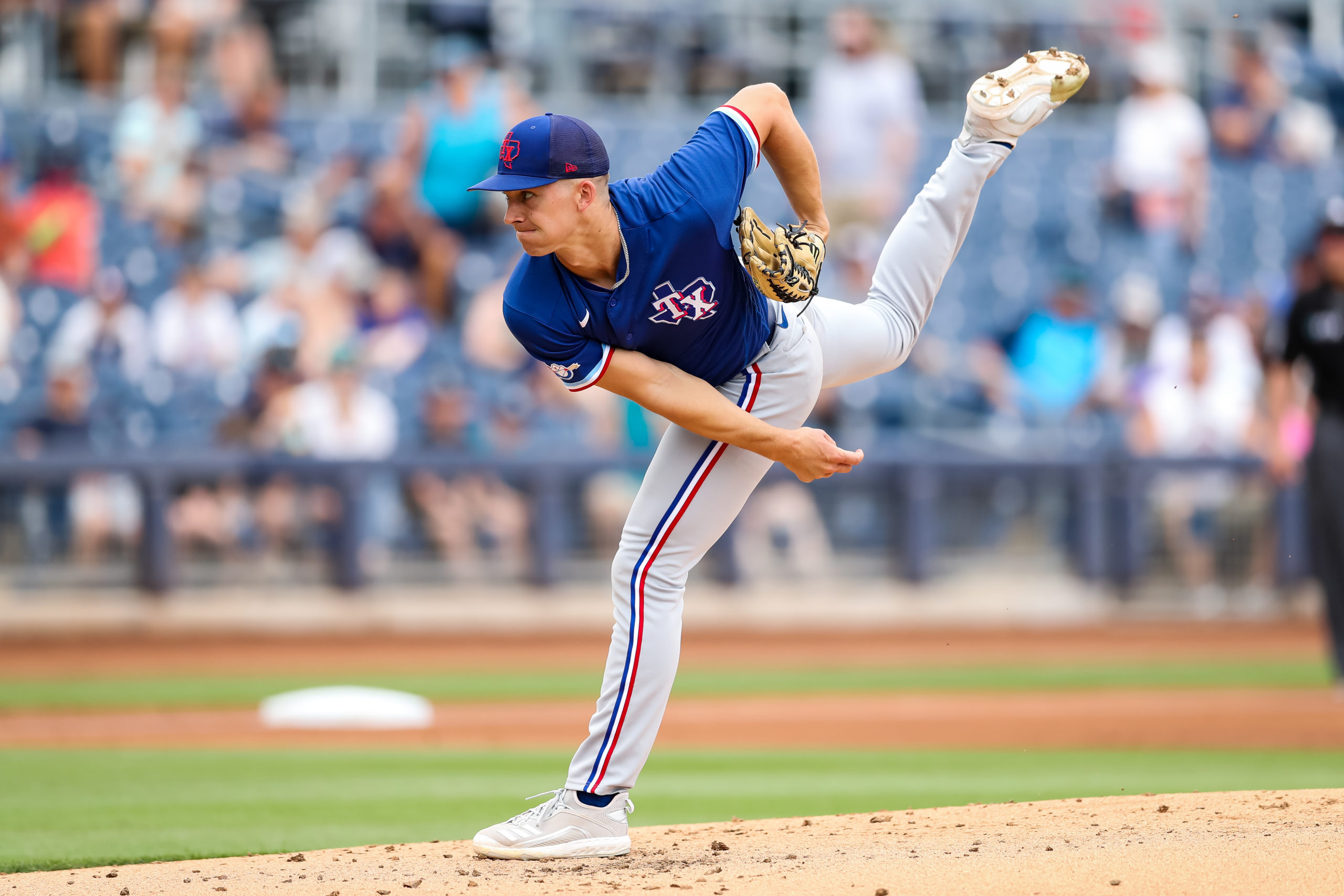 “It’s a natural progression as a big leaguer. The more you’re in the big leagues, [the] more you should mature. If you haven’t matured, then we haven’t done our job as an organization,” Rangers manager Chris Woodward told me earlier this week. Taylor Hearn and Dane Dunning got their first full big-league experience a season ago. Meanwhile, Glenn Otto dipped his toe into the majors and is getting another opportunity in 2022 after the Jon Gray injury. Currently, nine Rangers are on the pitching roster that pitched at some point last year (Spencer Patton and Josh Sborz are on the injured list, and Brock Burke didn’t pitch last year). So while the stat sheet may show a different narrative, is the internal growth showing for Hearn, Dunning, and Otto?

“The mentality [and] the way I got about it mechanically, everything is going the same,” Taylor Hearn told me. “It’s a matter of trying to find that rhythm.” When you look at Taylor Hearn, he’s a big lanky left-hander with a power fastball. Sure, he doesn’t have the velocity that Hunter Greene of the Reds has, but his stuff has the overpowering potential when you look across the career (minors and majors) for Taylor, which stands out, slow starts. “I remember in Double-A in 2018 that was my first All-Star team I made. I got off to the rough start that first month and then it was cruise from there, and the same last year.” Sure, no one wants to start slowly, but he’s taking it as reassurance for Taylor now. “It let me know like, hey keep doing what you’re doing [and] don’t change anything because it’s going to come around,” Taylor told me.

"Overall I felt good, I was happy I was able to go deep in the game for us. The only bad I'd take away from is just that one pitch I left up for Kyle Tucker."

Taylor took Tuesday’s outing against the Astros on a positive note, and for a start before in Seattle, Taylor said it messed with him mentally a little bit. “It was small minor tweaks that I am still working on, and not worried about it,” Hearn said regarding the second and third inning where he threw scoreless after allowing five in the first. “It messed with me mentally because of what happened in 2019, but I got over it. I had to continue to remind myself, “Taylor, you belong here and everything. Trust the process and trust yourself.” Taylor pitched his longest outing of five innings Tuesday and had a terrific month of May last year. It’s about building that confidence upon him and taking it start by start.

Dane’s first four starts on paper classify as okay. I don’t mean that negatively. The four offenses Dunning faced were the Blue Jays, Angels, Mariners, and Astros, each strong-to-quite-strong. For Dunning to yield two or three runs in each outing and avoid the treacherous inning is a positive. However, that dominant outing that showed a few times last year hasn’t surfaced. “[I’m] being a bit smarter, pitch-wise [and] pitch decisions on the mound,” Dane said when I asked the difference between last year and this year. “I’m feeling more and more confident each time I take the mound.” Confidence is the key for Dane, whether pitch decision-making or trusting the defense behind him. “I’m going to fill the zone and let them play defense behind me. If I get a strikeout here and there, great, but my goal is to get outs in whatever way that comes,” Dane said regarding relying and not relying on the defense.

Baseball is a weird game.

In 35 career starts entering today, Dane Dunning allowed 29 runs in the first and 5 in the second.

He throws a scoreless first and allowed 1 run but man it could have been a lot worse. 1-0 Astros #StraightUpTX https://t.co/b1nHB81PFr

Dunning was able to throw 88 pitches on Monday, which was one pitch shy of his career-high he set last year in a May start against Seattle. Four starts in and being one pitch shy of a career-high is encouraging that the club will extend Dane Dunning in regards to length. On Monday, Dane threw a scoreless first inning, which marks back-to-back starts of throwing a scoreless first (aided in Seattle by a triple play). “I went into the mindset of closing this game out in that first inning, and I felt a lot more competitive with my pitches,” Dunning told me regarding his start Monday against Houston. As for the struggles in the first, the reasoning could be a combination of things. For instance, lineups, better feel of the zone, routine, or all of the above. “Mentally, I took a different approach this time than I usually do, and it came out great,” Dunning said.

Otto dazzled Rangers fans in his first major league start on August 27th. Then, however, things took a turn where Glenn allowed five or more runs in three of his five September starts. So the page turned to 2022, raised some eyes during camp, had two scoreless outings in Triple-A Round Rock, and followed up with two good starts in the big leagues. “[Otto] looked good in camp. I liked what I saw,” Rangers manager Chris Woodward said. “Stuff is better [and] he’s worked hard on the mental side.” Otto talked about trusting his stuff more and simplifying the game, something that both the coaching staff and veterans influenced him on. “I’ve been able to talk and have great conversations with as well as the staff helping me get to that point pf realizing my stuff is good enough if I focus on execution,” Otto told me.

"Try to do everything I can to help the team win games. That's why I am here." – Glenn Otto @Rangers | #StraightUpTX | 📺 BSSW pic.twitter.com/Vu3lciab8r

Both starts had scenarios of potential disaster where turmoil lurked. Last Friday in Oakland, the Athletics hit back-to-back doubles to score a run. It was a familiar situation for Otto, but his focus zeroed in on the current situation to where the focus was on the next pitch. “I’m in a good spot [with] my routines, my preparation, my process here at the stadium, and away from the stadium to get ready.” On Wednesday, Glenn Otto brought out the sinker, which became a weapon in his start against the Astros. “I knew I was going to break it out eventually if I could find the right time,” Otto said after Wednesday’s start. “I’m going to try to use it a little more [strategic] going forward.” He told me that since he’s been in Round Rock he’s worked on the sinker.

Jonah Heim, who caught all three last year and is working with them this year, sees that difference in maturity between these three guys and even the bullpen. “Everybody’s coming this year with a year under their belt, and they know what to expect. ” Heim told me they know what they need [and] what it takes to get through a full year,” Heim told me. Jonah said it’d helped him as a catcher because the pitchers understand themselves, their pitches, and what to do to make them successful. None of the three starters nor Jonah mentioned a negative effect on the short Spring, but Heim eluded to the early season jitters from pitchers and hitters coming out more aggressive. Instead, think of it as a transitional period for pitchers to find their rhythm and get work under their belt.

As human beings, we learn every single day. So the organization wants to see from each player who takes the field growth and development. “There are still some things they need to learn and grow from and figure out how to be the best version of themselves,” Rangers manager Chris Woodward said. “That’s every player’s journey. That’s something we preach heavily in this organization, and I don’t expect that to stop.”