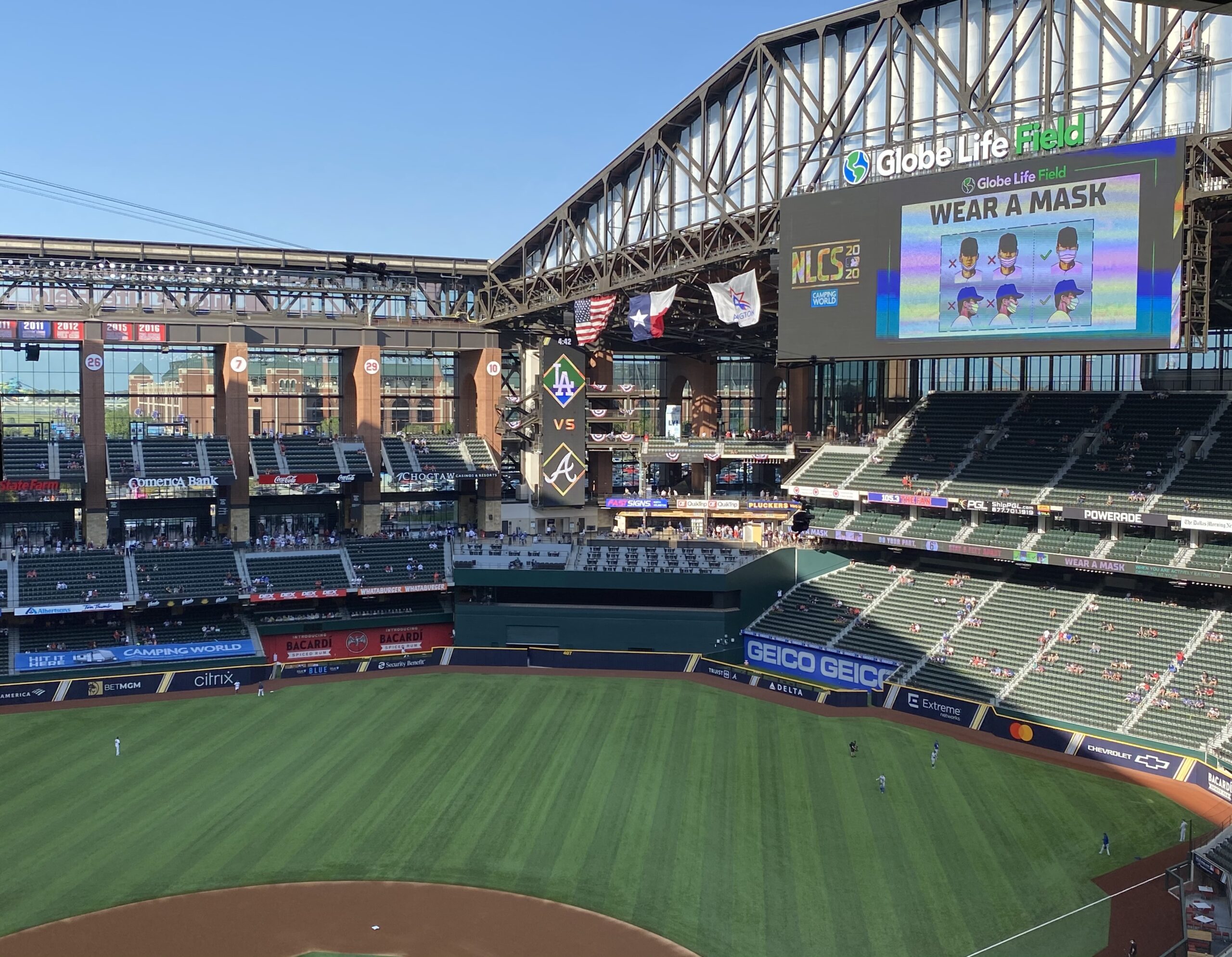 Game 7s are in a league of their own. MLB Postseason, NBA, NHL, any Game 7 intensifies the drama of every single moment. In its first year of existence, Globe Life Field will host Game 7 of the 2020 National League Championship Series.

The ballpark structure and conditions played a slight factor throughout the postseason. Early in the Division Series, the Dodgers seemed frustrated with the vast space of Globe Life Field against the Padres. There haven’t been a lot of quirks down the corners; Nick Markakis’ triple in Game 6 was a noteworthy one.  The swirling wind in Game 5 looked slightly problematic where the Braves took full advantage with a dominating win. While the Rangers will not take the field for this Game 7, it doesn’t mean Rangers fans should skip it Sunday night.

Well folks we got a Game 7 of the #NLCS tomorrow. MLB #Postseason in full throttle between the #Dodgers and #Braves pic.twitter.com/gffulqIXQN

By now, most know the Braves’ third base coach is none other than former Texas manager, Ron Washington. 2020 is Wash’s fourth year in the Braves organization. However, its Ron’s first time in a postseason setting since 2012’s Wild Card loss against the Orioles and it’s his first Arlington Championship series setting since 2011. Unfortunately, the Rangers had two chances to secure a World Series title and could not, but in 2020 Washington can celebrate a World Series title in Arlington, though for the Atlanta Braves. “Wherever you have the opportunity to get to become a champion, that’s special,” Ron Washington told me Thursday. “To win it in Arlington would be very nice, but hoisting in Atlanta would be nicer.”

Special Players on the Field

If you haven’t watched Mookie Betts, Freddie Freeman, Corey Seager, Ronald Acuna Jr., and others, you’re missing out. Corey Seager already set the NLCS record for home runs and RBIs in his Game 6 two-run home run Saturday. Marcell Ozuna had a multi-homer game on Thursday. Plus, Mookie Betts’ defense may have saved the Dodgers in the series back in Friday’s Game 5. This 2020 NLCS series already saw history, including a historic 11-run first inning by Los Angeles in Game 3 Wednesday in addition to a Will Smith vs Will Smith battle changing Game 5 for the Dodgers.

For the first series featuring fans in the stands, it gets loud. Braves fans make their presence known with the Tomahawk Chop throughout the game. Dodgers’ fans don’t quiet down at all. There were multiple instances on Saturday where the atmosphere felt normal. Fans screaming, booing, cheering with in-game music (thanks to Michael Gruber and Chuck Morgan). For a crowd that cracked less than 11,000, Saturday’s Game 6 was the loudest at Globe Life Field. Game seven, I can imagine, will be relentless in the crowd. It certinatly gets Rangers’ catcher Jose Trevino interested.

Sure, Rangers’ fans are wishing they’d be cheering their own team, but dramatic baseball is fun nonetheless. It’s an anticipated feeling come late March to April hoping the Rangers’ faithful is full come 2021 Opening Day against the Toronto Blue Jays. But for now, all eyes will be on Globe Life Field between the Dodgers and Braves Sunday night.