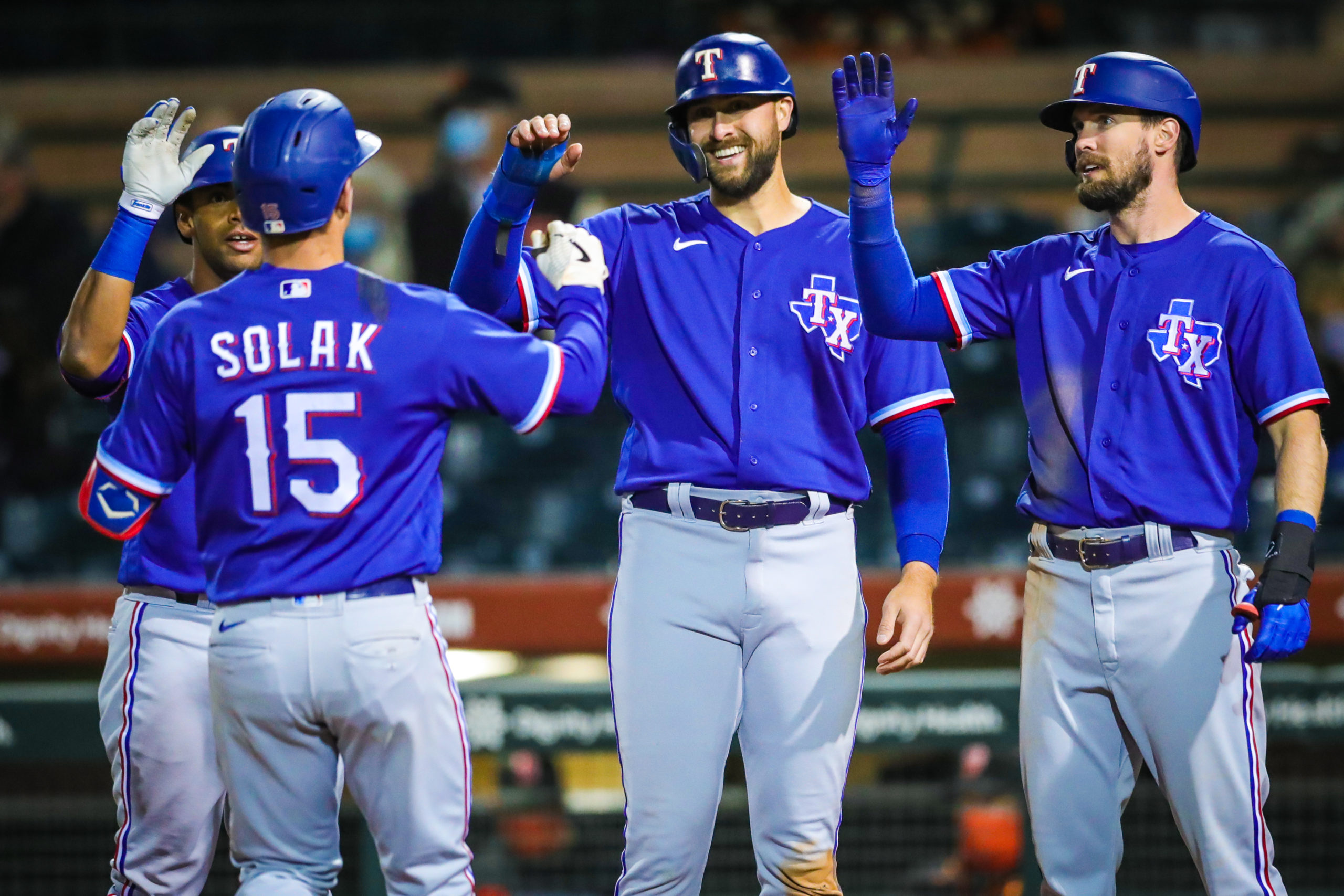 Why the Rangers offense isn’t as bad as you think

Why the Rangers offense isn’t as bad as you think

Starting Friday, the Rangers offense ran into a string of quality pitching. Padres pitcher Joe Musgrove’s arsenal of pitches was on point, and the command became impeccable all night, resulting in no-hitting the Texas offense. The Rangers scratched out a three-run inning on Saturday but couldn’t muster up any more runs. Sunday became the most frustrating day as the Padres lost Adrian Morejon in the first inning.

“We did everything we [didn’t] want to do,” Rangers manager Chris Woodward said after Sunday’s loss. “We had their bullpen for the whole game. That’s on us.”

Monday, the team ran into another buzz saw in Tyler Glasnow of the Tampa Bay Rays. On Tuesday the offense came back to form, and the Rangers hitters played to their capabilities in their 8-3 win.

Look, I’m not saying the Rangers offense is best in the league or that there aren’t any holes. Of course, there are many areas for improvement. The Rangers are second in MLB in strikeouts, draw the second-fewest walks in the American League, and have scored the tenth fewest runs in baseball. On the positive end, you’re watching the American League’s best team with runners in scoring position (Woody even looked stunned after I told him that). Texas hits .341 with runners in scoring position and is the only team in baseball with an OPS of over 1.000 in that scenario. All of this includes an 0 for 7 stretch the club went through between Sunday and Monday’s losses.

"Anytime you get a win in the big leagues, it's worth it"

There is a small catch to this. The Rangers are in the middle of baseball (18th overall) in at-bats with runners in scoring position (82 ABs). The club is also fourth in baseball with runners in scoring position with two outs. On the other side of the spectrum, the Rangers hit .155 entering Wednesday with the bases cleared, and the leadoff man does not reach (third-worst in baseball). Therefore, if the leadoff hitter can’t set the table, the club likely goes down in order.

What’s the deal with that? Well, Rangers hitting Coach Luis Ortiz talked Tuesday that it has to do with developing this group as an offensive unit rather than a hitting unit. “Hitting is about getting hits; offensive is about what we got to do to score runs,” Ortiz told me. “You don’t have to do too much, all you have to do is get on base, and the next guy will get on base. It’s just getting that first guy on base, that’s the challenge.” Chris Woodward sees it, and he notices that the players are addressing it every day. “I’m proud of our guys for doing that,” Woodward told me after the game Tuesday. “When our guys have their mouths watering because they can’t wait to get up there with the bases loaded, that’s where we’re going to take that next step.”

Asked the hitting coach Luis Ortiz why the club hits better w/ RISP, he said guys put a little bit more pressure because they need to get on base. They are more relaxed at the plate w/ RISP.#StraightUpTX

I do think the Rangers’ success on both sides of the spectrum will even out. That said, to see these young kids grow, develop, and pull through under challenging spots is encouraging. Remember, on Monday’s loss to the Rays, Jose Trevino was your old guy in the lineup (age 28). There will be growing pains, but the important thing is what Woodward says almost every day, “We got a group of guys who really want to win.”