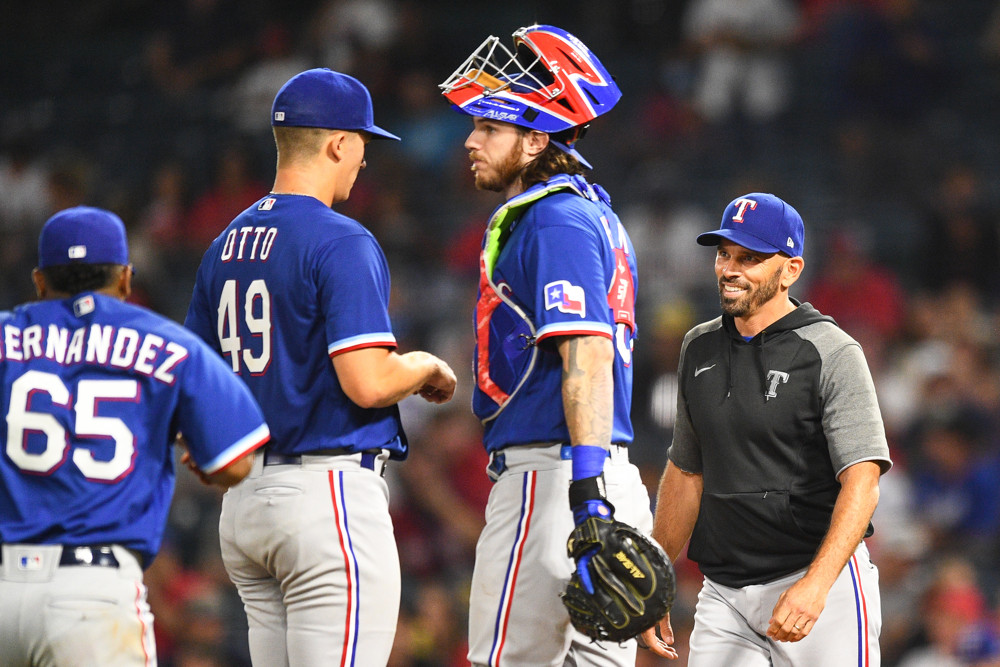 A reunion between Glenn Otto and the Yankees happened, but not exactly the way he wanted. Otto’s first MLB start on the east coast will come Thursday in Baltimore rather than earlier this week in the Bronx. The numbers don’t look sexy and slick on paper, but the inflated numbers come from two specific innings in his last two starts. “[Otto is] going through the normal learning curve for a rookie pitcher in the big leagues,” Rangers co-pitching coach Brendan Sagara said when asking about his assessment of Glenn Otto in the short sample.

Sagara mentioned the lack of movement data in his first start against the Astros and pad that with the Angels start, teams have a better idea of what to look for regarding Otto’s arsenal and movement. “I think that makes it more vital for him to execute, and he’s still going through the process of growth where he’s learning how to execute consistently. There’s still a lot of good there [and] his body of work overall has been impressive.”

Glenn Otto, who won't pitch in the series, told me he made it a point to not go to Yankee Stadium until he was playing there.
"It'll be cool to see that atmosphere finally and be around those guys that I got to be around in Spring training and learn from." #StraightUpTX #SquadUp

What should Rangers fans look for when Otto takes the mound in his final two, maybe three outings? Well, consistency and execution are common denominators between Otto and Sagara. “I know I’m capable of doing well up here. It’s just execution [and] falling into any patterns,” Glenn told me. “It’s fun getting to compete against these hitters, but you got to be able to get out of those jams.” Outside of the fourth inning vs. Houston and the second inning vs. Oakland, Glenn Otto has allowed four runs in fifteen innings (2.40 ERA). The key is when he gets into trouble to minimize the damage. “It’s a learning curve, but I know I’m capable of making those pitching and getting these guys out.”

In the reality of modern baseball, trades happen. Hell, young guys like Taylor Hearn, Nick Solak, and Jonah Heim have been a part of two or even three organizations. The intriguing aspect is while everyone focused on Heim facing the Oakland Athletics, this weekend’s series against the Orioles marks Jonah facing the team that drafted him. Jonah was a fourth-round draft pick of Baltimore in 2013 (drafted out of high school as an eighteen-year-old). Dane Dunning also got the experience facing his old team in April and saw his former teammates again.

“I’ve been traded three times, four times, I don’t even remember at this point,” Jonah Heim told me. “You get used to it. I know my first trade was emotional because it was the team that drafted me, and I thought that’s who I was going to play forever as a young kid and being naïve. There are some emotions, but you can’t think about what the other guy does. Just go out and do your own thing.” For many guys, the mentally taxing part is leaving their teammates then worrying about what the other side of the trade is doing.

Last weekend vs. the White Sox was the second time Dane Dunning saw his former teammates (though he didn’t pitch this time around). “It’s weird being on the other side,” Dane told me. “I love where I’m at. I love being with this team, but I’m definitely for my old team at times too. A lot of friends I got over there.”

Taillon went to the Woodlands HS & Otto went to HS in Tomball (18 mi away). #StraightUpTX #SquadUp

Otto Down the Stretch

Meanwhile, for Glenn Otto, there’s a lot to like despite the inflated numbers. “[Otto] ‘s got a nice slider [and] he’s got really good awesome pitches,” Heim told me. “He’s been commanding his fastball pretty well.” Can he sustain as an MLB pitcher? Sagara thinks so. “He’s very talented and very intelligent. The talks we’ve had with him recently compared to when he first came up are a lot more sophisticated. His intelligence and ability to grasp concepts will allow [Otto] to grow faster.”

Now it’s about finishing 2021 on a high note, and Glenn Otto is ready. “Keep on keeping on, trying to crack the code, trust my stuff, and try to finish with these next two outings and finish strong.” For the record, I love the “Keep on keeping on” saying by Otto. Rangers’ fans may think the series vs. Baltimore doesn’t mean much, but for the players, it certainly does. A sexy end (stats-wise, relax) is what would elate the Rangers to end an abbreviated start to Glenn Otto’s first MLB experience.