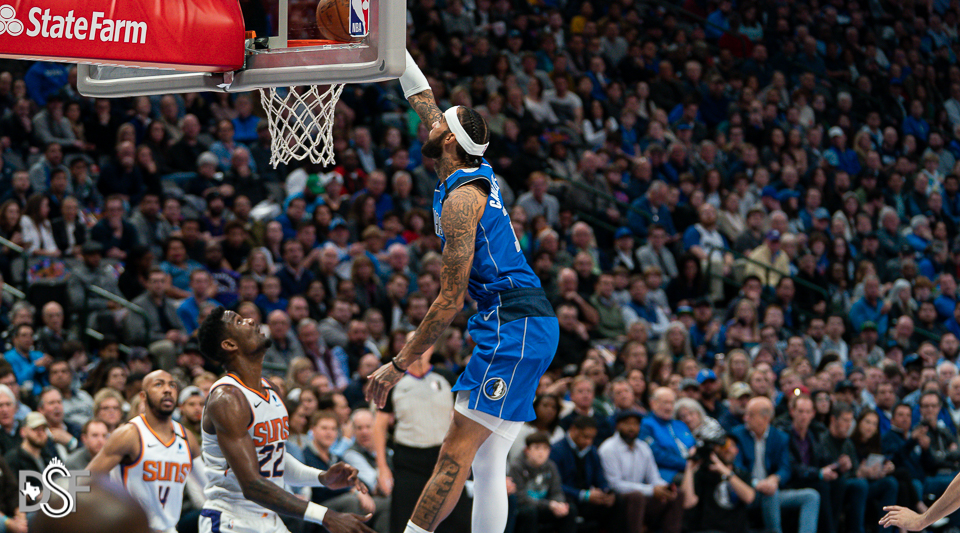 After Willie Cauley-Stein spent his final collegiate season at the University of Kentucky going 38-1 with the likes of Karl Anthony-Towns and Devin Booker on his team, expectations were high for his NBA career. He rightfully went number six overall in the 2015 draft. With career averages of 9.8 points and 6.4 rebounds in his fifth season, it would be harsh to label the 26-year-old big man a “bust.”  However, he isn’t afraid to admit that he’s looking for a little more from himself and he arrives in Dallas with excitement for what could be a way to jump start his NBA career.

“It’s for sure a great opportunity to try to kinda restart my career and try to find a home,” Cauley-Stein said to a large herd of media in front of his locker ahead of the Mavs’ Tuesday night’s 133-104 blowout loss to the Phoenix Suns. “It’s a perfect spot. Just the way they play kind of fits the strengths of my game. Defensively, there’s a lot of freedom to create havoc and that’s what I do.”

Mavericks coach Rick Carlisle hasn’t exactly just taken the leash off the springy big man and let him run loose. After meeting with the team for the first time on Sunday night in Oklahoma City, he was a DNP-CD during the team’s win in OKC on Monday night and played just 12 minutes minutes on Tuesday night (only about 4 minutes were in a non-blowout stretch in the first quarter.” Carlisle hinted pregame Tuesday that it could be a slow buildup in implementing Cauley-Stein into the rotation.

“You just have to try to get him the right doses of things so this stuff can stick and he can keep building on them over a period of hopefully a week to ten days.”

While Cauley-Stein had two coaches in four seasons in Sacramento, George Karl and Dave Joeger, he’s coming to an organization that has had the same coach since he was just 14-years-old in Kansas. He is excited for the opportunity to work with a coach like Rick Carlisle who is often lauded for getting the most out of players who other teams haven’t quite been able to crack.

“I think that’s why I’m here… He challenges you every day to get better and I like that. I like the work. I like the challenge of trying to come in and fit right away. Your IQ gets to come out and it has just been a fun time.”

Being an athletic big man in Rick Carlisle’s offense has certainly paid off before for the likes of Tyson Chandler, Brandan Wright and most recently Dwight Powell.  That isn’t all Carlisle, though. The biggest key to that facet of unlocking a big man is which play maker he gets to play with. WCS did well in his two seasons next to young Kings point guard D’Aaron Fox. His points per game jumped from 8.1 during the 2016-2017 season to 12.8 in Fox’s rookie season of 2017-2018. There also happens to be a pretty good play maker here in Dallas by the name of Luka Doncic. Cauley-Stein has certainly noticed the skills of the 20-year-old All-Star starter and was very complimentary of him as well.

“Incredible pace for twenty,” Cauley-Stein says with a smile of admiration. “The way he controls the game is fun to watch, It was hard to play against him so now I’m glad I get to play with him… With me and Luka, or any of these dudes, the way our spacing is, it’s deadly.”

The Mavericks were able to land Cauley-Stein for merely a late second round pick, so it’s not like they had to remove a beloved figure in the room to bring him in. He was fortunate enough to be placed next to former Kings teammate Justin Jackson in the locker room and the two shared smiles and jokes with the media when Jackson tried to squeeze into the space in front of his locker during Cauley-Stein’s  crowded interaction with the media. He teased that he hoped Jackson was a big influence on why the Mavericks traded for him. It was certainly a nice touch when Jackson got the assist on Willie’s first basket as a Maverick on Tuesday night.

Trill's on the scoreboard!@THEwillieCS15 | #MFFL

Other Mavericks are excited about what he can bring to the table as well.

While the casual Mavericks fan might not be too familiar with what Cauley-Stein brings to the table after four years in Sacramento and the first part of this season with a bad, injury-riddled Warriors team, he wasn’t afraid to clarify what that fan can expect to see from him.

“(Expletive), they’re going to see,” he said with a smile. “I play hard. I play for my teammates. I just want to win… that will to win and that competitive spirit, that’s what you’re going to get.”

Not every player casually drops an expletive during their media availability, but Willie certainly seems to be one of a kind. Not only in appearance, but with a fun personality who’s willing to share a smile and be honest. While we’re just a few days into his tenure in Dallas, it will certainly be a fun ride to see if this low-risk investment by Donnie Nelson is another diamond in the rough jackpot.