Wrap Up: Mavs Triumph Over Thunder in OT

Wrap Up: Mavs Triumph Over Thunder in OT

The Dallas Mavericks (43-29) end the night with a much needed win, defeating the West’s second best Oklahoma City Thunder (52-19) 128-119 in overtime. The victory puts the Mavs just a half game above the Phoenix Suns for the eighth and final playoff spot.

How it went down:

The moment the game tipped, both teams started in a sloppy fashion. Despite the Mavs and Thunder committing 11 total turnovers in the first period, Dallas took advantage of the Thunder’s lack of production on offense. The Mavs converted 7-of-8 at the charity stripe by entering the bonus just three minutes into first quarter. By the second quarter, Kevin Durant and Russell Westbrook would spark some fire for Oklahoma City. Durant’s 20 points in the first half (including 7-of-8 from the free throw line) put his team up 60-59 at the midway point.

The second half was a fairly different story as the teams battled throughout the game trading baskets in the third quarter. Two back-to-back 3-pointers from Vince Carter and deep 3-point shot by Jose Calderon gave the Mavs a two-point lead under two mintues in the period. But Kevin Durant would answer back with a 24-foot jumper from behind the line, putting OKC up by four points to start the last quarter.

Dirk Nowitzki and Monta Ellis would not go down without a fight in the fourth quarter. Ellis and Dirk each scored eight in the last quarter alone, providing the Mavs a three point lead with 55 seconds left in the game. After two clutch 3-point jumpers from Derek Fisher and Durant, Calderon (6-of-9 3PTM) responded with a critical triple from the top of the key to send the game into overtime.

Dallas entered the current homestand’s third overtime game with the determination for victory. Dirk refused defeat, scoring a pair on a tough one-legged fadeaway over Durant then a dagger 3-point basket which put the game away.

Dallas is now 3-11 when allowing opponents to score 60 or more points in the first half; the Thunder led 60-59 at the intermission.

Kevin Durant scored 43 points, his 36th consecutive game totaling at least 25 points. He needs five more to pass Michael Jordan’s record of 40 such games. Durant is averaging 38.2 points over his past five games. 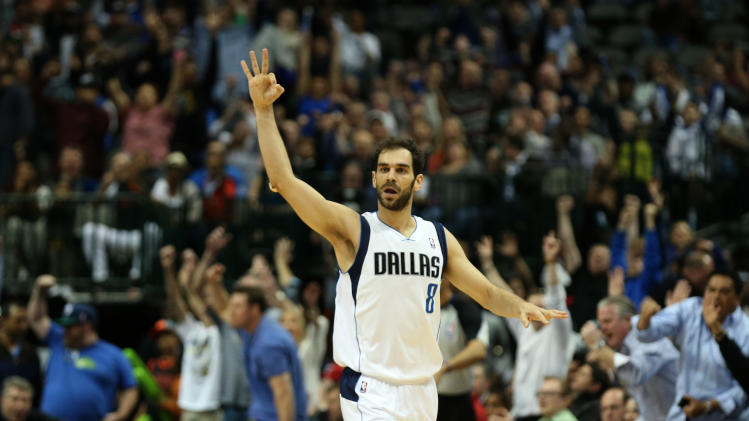 Impact Play of the Game:

Russell Westbrook stole the ball from Dirk with 55 seconds remaining in the fourth quarter. After a Thunder timeout, Durant would shoot and make a triple over Marion who appeared to play the drive with 39.9 remaining.

The impact play came when Dirk who launch a potential game-tying three, but miss and reserve center Brandan Wright grabbed the game’s most important offensive rebound. Wright tracked the ball down near the far corner, scanned the floor before quickly kicking it out to an open Calderon. BANG! Jose would connect on his fifth long ball of the game and force the extra session.

Step-Up Mav of the Night:

Dirk Nowitzki redeemed himself in this game versus the Thunder, following a painful performance against the Nets from Sunday night. Dirk really showed he can still get the job done at age 35. Nowitzki finished the game with 32 points, 10 rebounds, six assists and four steals while shooting 47% from the field.

The Mavs play game five of the home stand on Thursday night when Blake Griffin and the Los Angeles Clippers come to town. The game can be seen on FSSW at 7:30 p.m. CT.