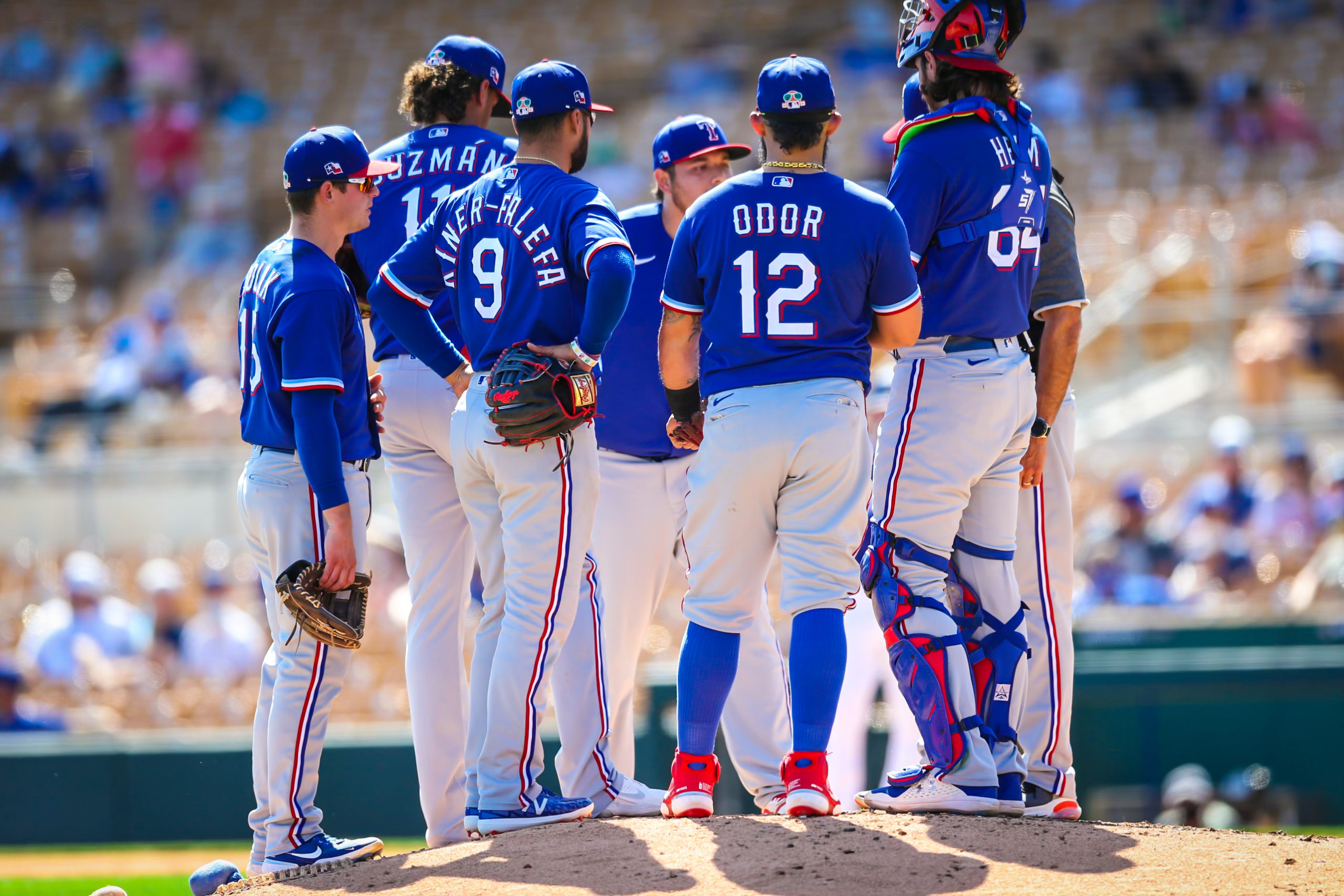 Your Rangers Projected Opening Day Roster: Who is in and Who is out?

Your Rangers Projected Opening Day Roster: Who is in and Who is out?

We’re leaning into the final week of Spring Training with a slight twist. Over the past few weeks, the injury bug plagued the Rangers, especially the bullpen. Twenty-six guys will earn the honors of an opening day roster in Kansas City. Here’s a look at my projected opening-day roster. The highlighted players are in my opening day lineup.

Listened back and missed Jonah Heim, he is also on the #Rangers Opening Day roster. https://t.co/gnPS8OoDxc

Jose Trevino is a lock for the opening day starter behind the plate. The question was who got the backup role. The minor league season delay changed my mind between Heim and Drew Butera. It wasn’t because I think Heim should be in the minors, but I think it would be more beneficial to get as much playing time as possible. If Heim started in AAA, he’d get that starting role-playing time instead of one game a series. Jonah has the skills behind the plate, and Chris Woodward said Tuesday he’s working his tail off in the cages. Can Heim stay in the big leagues? Woody thinks so. “He’s a smart kid. [Jonah] wants it. He comes in every day with a good attitude, wants to get better, and wants to improve,” Woodward told me.

With Guzmán’s successful Spring, the idea of him off the roster is in the past. It helps Guzzy’s case that the Rangers are thin on the forty-man when it comes to position players. A plus for Guzmán is that he is an emergency outfielder if the club needs it. However, don’t expect too much time in the outfield or designated hitter. If Guzmán is in the lineup, he’s at first base. Also, Chris Woodward said that Brock Holt is on the club because he can play the shortstop position if the Rangers need to give Isiah Kiner-Falefa a day off. Rougned Odor is your third baseman. He’s played well this Spring and earned the role. Andy Ibáñez is an intriguing pick, but I doubt the Rangers would only carry three bench players. Out of the non-roster invitees, Ibáñez is a righty, so I think he’d go over Brock Holt.

For those who were wondering if Eli or Leody should make the opening day roster, well why not both? I’m curious about who gets the more playing time, but Eli certainly makes his case to head to Kansas City for Opening Day. Consistency is vital for Taveras and no disrespect to Dahl, but don’t be shocked to see some Eli, Leody, Joey outfield combos in 2021 with Dahl DHing.

There’s a lot of moving parts to the bullpen:

There’s no shock to my face if the club decides to go with Ian Kennedy instead of someone like John King. Keep in mind that Joely Rodriguez and Brett Martin are both scheduled to return in April. Therefore, King would likely go to the alternate site when Martin and/or Rodriguez return. The Rangers have lefty options outside of King and Yang, but they’re likely in the tandem spots. Who knows, by the time I finish this sentence, someone else could go down in the pen. To quote one of the early MTV dating shows, “Next!”

Khris Davis has a grade 2 quad strain and he'll likely be out 3-4 weeks per General Manager Chris Young. Cross another name off the Opening Day list.

At this moment, the Rangers have thirty-nine players on their forty-man roster. Jonathan Hernandez and Jose Leclerc are likely to go to the sixty-day IL, which opens two more spots on the forty. With Davis going to the injured list likely and Willie Calhoun in the same boat, the club may need additional spots. General Manager Jon Daniels said the club at minimum would pull three non-roster guys, which feels like a given with the current injury situation.

The Royals announced Brad Keller will start on April 1st in Kansas City. With that in mind, here’s my prediction for who Texas sends out for regular season game 1:

Again, it depends on Khris Davis’s health, but I think Nick Solak could be an exciting choice as a cleanup hitter. Lowe could be good at cleanup. I tried not to stack three straight left-handed bats. Solak can utilize all fields. Therefore, I think he could post underrated protection for Joey Gallo (maybe not early on, but if Nick gets going).

With Jordan Lyles confirmed in the tandem role, it leaves either Kyle Cody or Dane Dunning out of the tandem role (at least to start). I think with Cody’s arsenal, he could be a force in the bullpen too. Woodward has many options to utilize Kyle Cody. I also think Taylor Hearn’s stuff is vastly different than Lyles, so that combination could make oppositions uncomfortable.