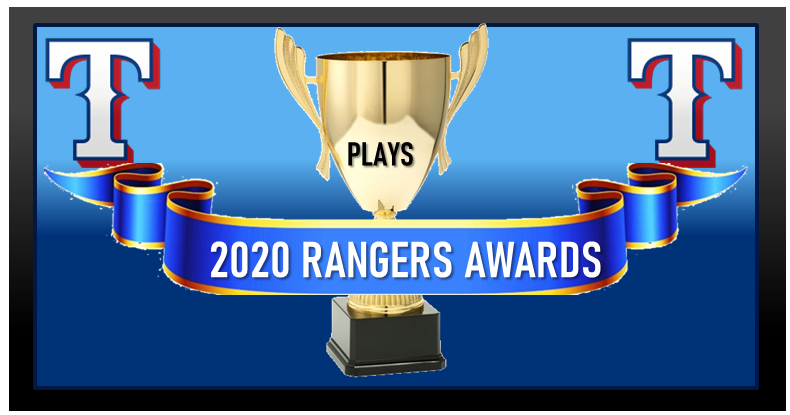 We continue the awards ceremony with the top plays of 2020. Just because the season was short doesn’t mean there weren’t some great plays to acknowledge. All of the plays mentioned below stood out in some shape or form, it was a great time reliving the positive of 2020.

Best Rangers’ overall play
Winner: Isiah Kiner-Falefa makes two incredible plays in a span of seven minutes at third base (Aug 10 vs. SEA)
2. Shin-Soo, in his possible final Rangers AB, bunts for a hit with a bad hand (Sept 27 vs. HOU)
3. Scott Heineman homers with his brother, Tyler, behind the plate (Aug 1 at SF)

I could probably put a reel together of the defensive sparkle that Isiah Kiner-Falefa brought on the diamond in 2020. Oh wait, IKF and the Rangers already did. Unfortunately, I don’t see Isiah winning the gold glove in 2020. It’s not because he doesn’t deserve it, but I think because he didn’t staple to one position and split time between short and third base, that may disqualify him. It’s dumb, and there shouldn’t be punishment for that, but I think Major League Baseball doesn’t see it that way.

Best Rangers’ throw of 2020
Winner: Joey Gallo doubles off Matt Thaiss at first base (Sept 10 vs. LAA)
2. Isiah Kiner-Falefa with a quick barehanded throw to get Alex Bregman at first (Sept 17 at HOU)
3. Joey Gallo nails Brian Goodwin at second base with no contest (Aug 9 vs. LAA)

It felt like the Rangers outfield didn’t have many chances, or it could be the shortened season. The list dominates with Joey Gallo, who keeps showing up his cannon arm in right field. Chris Woodward praises Gallo’s outfield ability and for a good reason. Lost in a struggling season at the plate, Joey Gallo looked great in right field in 2020. Like Isiah Kiner-Falefa, a gold glove is in the future.

For the record, 433 is inaccurate for the distance. I know Statcast uses high technology to calculate these distances, but it’s wrong. Joey Gallo annihilated that baseball from Mariners’ starter Justin Dunn. I’m not saying its Nomar Mazara vs. White Sox 2019 level, but it certainly would have made a lot of noise in a loud park with fans.

Need I say more? It’s not as comical as Jose Canseco, but it was a blast from the past for Ranger fans. I know Nick Solak still pleads to this day for a change, but looking at the play further, MLB made the correct ruling. The other challenging part was watching Jo Adell. A highly touted rookie made the mistake in right field. He’s trying to make a great play and nearly did. However, the ball slapped out of the glove, and hilarity ensued.

Leody Taveras (#2 #Rangers prospect) showed off all his tools last night. Below, a highlight reel catch, robbing Justin Turner of a 3-run HR.

He also got on base in the third, proceeded to steal 2nd and then score the game’s first run. Keep an eye on him!#TogetherWe #PLive pic.twitter.com/scaqBAR9eP

Leody entered his first week in the majors (he did have a defensive inning on opening day). In this specific game, Taveras not only robbed a home run, but he hit his first MLB home run (a shot off Dustin May of the Dodgers). I feel like that Friday was the day Rangers’ fans sold on Leody Taveras and witnessed a gem in the making. Leody continued to have a promising rookie season with a lot of growth within him.

We’ve gone one more set of awards to cover, the miscellaneous section of awards. If you want to check out who (in my eyes of course) won offensive player of the year, defensive player, starter, reliever, and rookies of the year you can check out the player awards.