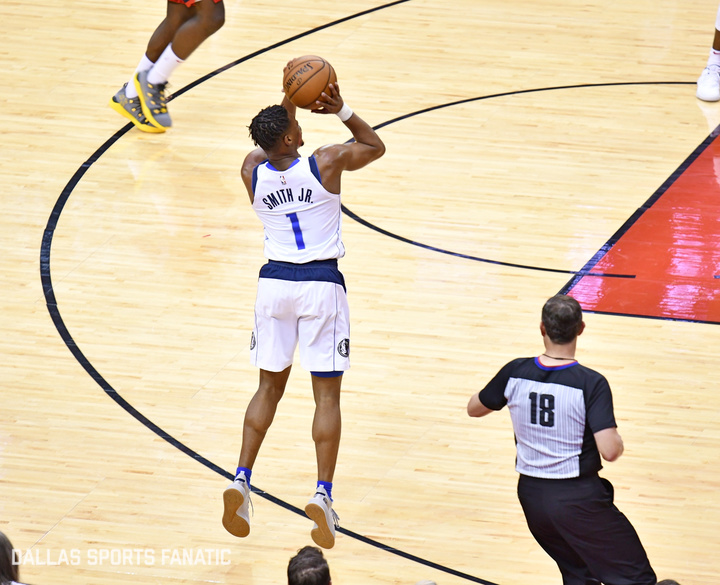 3 things to watch for as Mavericks visit Lakers

3 things to watch for as Mavericks visit Lakers

The 10-9 Dallas Mavericks travel to Los Angeles to take on the 12-9 Lakers tonight. Dallas extended their winning streak to four games after a 20-point win in Houston. The Lakers are coming off a win against the Pacers that featured LeBron James scoring 38 points, 9 rebounds, and 7 assists. Here are some things to keep and eye on tonight.

Dennis Smith Jr. is not exactly known for his defense. Pairing him next to Luka Dončić has also shown Mavs fans that DSJ will need to be way better on that end of the floor if the DSJ-Dončić backcourt is going to be the future. After missing one game with a wrist injury, DSJ came ready on the defensive end against the Rockets. He finished with a modest line by going for 10 points, 5 rebounds, 5 assists, 4 steals, and 1 block. The biggest part of his game was his defensive intensity, which lead to his season-high in steals. It was especially encouraging considering he didn’t have a stellar offensive line. Dallas blew out the Rockets because DSJ was engaged despite a so-so offensive night and they will need him to bring that same energy to get a win in LA.

Dončić vs James Round 2

It is safe to say that Luka Dončić was at least somewhat star struck the first time the Mavs played the Lakers this year. Dončić finished with a modest line for him with 14 points, 5 rebounds, and 7 assists. He looked somewhat passive and came out slow in the first half. It looked like he was nervous to play against his idol for the first time. Now that they have already squared off once, Mavs fans should expect to see a the more aggressive Luka of late. A lot of people were upset that Luka went and got LeBron’s signed jersey after they lost. A win tonight that would extend the Mavs winning streak to five, the most since the 2015-2016 season, would surely help them forget about that small moment.

It is early in the season to be talking about important regular season games that could have playoff implications. But as the Western Conference sits today, the Mavs are the 8th seed and the Lakers are the 7th. Dallas is two games back of the Lakers in the win column. Getting a win tonight would pull them one game closer to the 7th seed and keep building the confidence this young team needs. With the Western Conference standings so backwards right now (the Clippers are 1st and the Warriors are 3rd), winning games like these against other current playoff teams can be crucial towards the end of the season.

Dallas travels to LA to take on the Lakers tonight at 9:30 PM central time on Fox Sports Southwest.