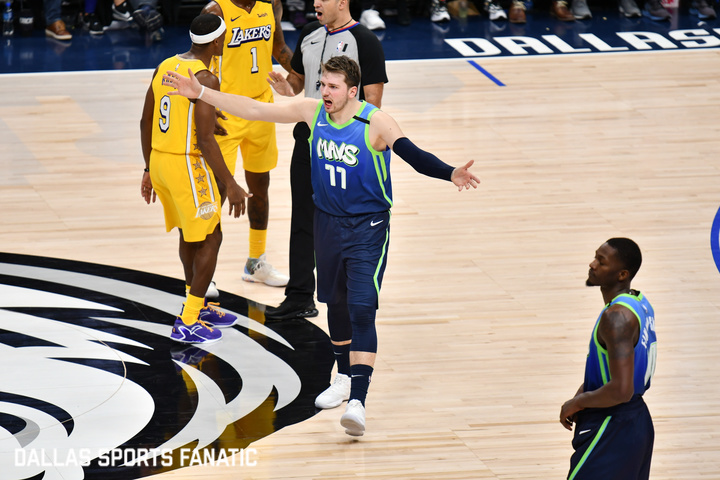 A ripped jersey, stripped sportscoat, and a Mavericks loss to the Lakers

A ripped jersey, stripped sportscoat, and a Mavericks loss to the Lakers

Following the last second, heartbreaking loss to the Nuggets on Wednesday, the Mavericks looked to bounce back against the Lakers tonight at the AAC.

Certainly a tough “bounce back” opponent but without Anthony Davis in the lineup for Los Angeles, that gave the Mavericks some boosted optimism.

Missing Anthony Davis tonight had no effect on the Lakers success, as they jumped out to an 18-point first quarter lead. And for the most part, the onslaught continued, as the Lakers win 129-114.

Though the Mavs cut the Laker lead down to 12 in the second quarter and 10 in the third, those continuously led to several Lakers’ runs, missed Maverick free throws, and Luka ripping his jersey with over two minutes to go in the first half (yes, he played with his jersey ripped down to his chest).

It was truly an emotional, frustrating game. LeBron was well, he was LeBron; dominant in every fashion, finishing with 35 points, 16 rebounds, and seven assists.

Kyle Kuzma, who has struggled for most of the season, started in AD’s place, scoring 24 points and played the role of LeBron’s sidekick for the night just fine.

The frustration sure looked to be at an all-time tonight in many forms. First off, the officiating was just all over the place. Don’t think I’ve ever heard as many whistles during a first quarter before. Of course, calls will waiver in both teams favor throughout a game but it sure was heavily leaning in LA’s favor in that first half and that lingered on into the later part of the second half.

Rick is certainly an expressive coach but that’s an understatement for tonight as he was ejected, receiving his first technical foul in the first half for the various missed calls and eventually getting tossed in the early fourth after the Lakers were awarded a coaches challenge after the Mavs inbounded the ball.

“I thought that, you know, since we had the call inbounds and dribbling the ball over half court, it wasn’t appropriate for them to call timeout to challenge and the official let them do it,” Carlisle said of his ejection.

Rick was in the officials eat the entire game, and rightfully so. When asked about what changes he’d make to the officiating across the league, Carlisle joked, “I’m not going to get into that stuff here. You should see my credit card bill from Christmas. I’m not gonna spend anymore money on this.”

And let’s not forget in the first half, Carlisle was seen exchanging a few words with LeBron James before a timeout. What was said? We’ll probably never know.

For Luka, tonight was a rough one and it was visible that he was frustrated with his own play. Near the end of the second quarter, after missing two straight free throws, Luka ripped his jersey in frustration. Like, literally split his jersey down to the middle of his chest and played like that for the final couple of minutes of the first half.

Luka nearly ripped his jersey in half, then kept playing 😅 pic.twitter.com/HcooSDmM6q

“I played very bad. I know I can get better. There’s a lot of things. I’m 20-years-old. I’ve got a lot of things I can do better,” Luka said of his performance tonight and how he handles frustration.

When it came to discussing how Luka handles his frustration, Coach Carlisle backed his young superstar after the game.

Luka’s disappointment in his and the team’s play was evident. Luka can’t hide his emotions; they are worn on his sleeve. Obviously ripping your jersey on national television during the second quarter is not the best of looks but I get it coming from your 20-year-old superstar who’s only desire is to win.

“He’s learning how to deal with that stuff. It’s not easy,” Carlisle said. “I think we got to understand that he’s still young. He’s mature beyond his years in terms of how he sees the game and his skill set and how he can do things out on the floor but we’re going through a rough stretch right now and everyone needs to try to keep their emotions in check.”

Outside of the frustrations from tonight’s game, the Lakers are just a much better team and that’s fine. There’s a reason they are now 31-7 and the no. 1 team in the West. They are contending for a championship. The Mavericks are contending for possibly a top four seed and maybe a first round series win.

And most importantly from not just tonight’s loss, but their play as of late, the Mavericks miss Kristaps Porzingis. That is evident. And though his offensive numbers have been the sexiest, they miss his ability to stretch the floor. But most importantly, they miss his rim protection and rebounding. Tonight, and every game since he’s been out, the opponent has had free looks at the lane and easy layups left and right.

Though KP won’t play tomorrow against Denver, Carlisle hopes he can play next week on their road trip to take on Golden State and Sacramento.