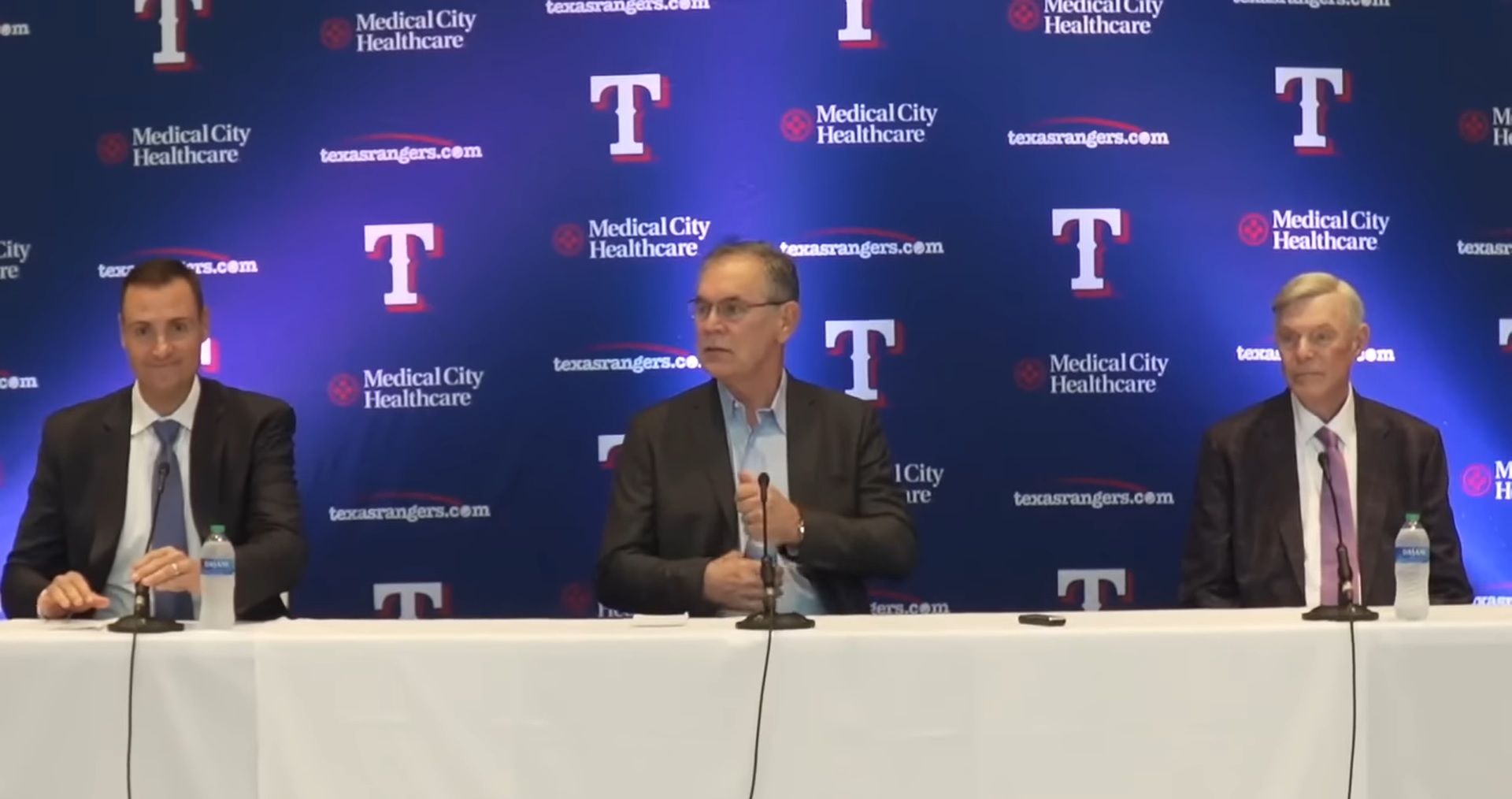 We’re two weeks into the offseason with a needed roster cleanup over the last few days for the Rangers. Texas is still on the prowl for their new pitching coach and has other front-office vacancies to fill. However, the magnifying glass is on what the roster will look like in three months when pitchers and catchers report. According to multiple sources, the Rangers are linked to high-level free agent starting pitchers like Jacob deGrom, Carlos Rodón, and others, as starting pitching is number one on Santa’s list for the Texas Rangers. But how much should Texas spend, and how much should they give up if a high-class pitcher is available through a trade? Here are the three aspects of Texas’ roster that either need addressing or are possibly sufficient.

also Mitch Garver, Josh Sborz, Brad Miller, and Eli White are all activated off the 60-Day IL and to the 40 man roster. #StraightUpTX #Rangers

Unless you are Patrick Star and living under a rock, you know the Rangers’ most significant need is starting pitching. There remains a question mark if Martín Pérez is returning, and the club added Jake Odorizzi to the mix. Add Jon Gray to the rotation, and now there’s a need for 2-3 spots (reports lean to Martín accepting the Rangers qualifying offer, but not official). In September, Chris Young didn’t rule out Brock Burke possibly getting a chance to start, but of course, Brock would need to build up to that, and the club gave Dane Dunning, Glenn Otto, and Cole Ragans opportunities.

The Rangers will get a big-name starter in the mark, but just one. I can see a Carlos Rodón or a Jacob deGrom heading to Arlington, but only one. Or if the trade route turns out better, Texas will trade for a high-class pitcher. Remember, you have guys like Jack Leiter, Kumar Rocker, Owen White, and others waiting in the minor league system eventually; you want them to get their shots when they’re ready. Plus, I don’t think it’s viable to give up on Dunning, Otto, and Ragans, who I felt each took personal strides forward in 2022. Yes, I know this team’s aspiration is postseason in 2023, but the last thing you want is to give those guys away; they reach their full potential, and you’re recollecting what could have been (we’ve all been through that enough, haven’t we?)

I’ve said this a few times, but bullpens vary year-to-year more than any other aspect of a club. One year you may have the best bullpen statistically, and the following season it’s your weakness with the same roster construction. The Rangers’ bullpen in 2022 was better than what people It was one of two pens in MLB with an ERA below 3.80 and with 640 innings or more (Tampa Bay Rays). When you look at what the Rangers have, they don’t need to add a lot of guys to the bullpen. Texas picked up José Leclerc’s option for next season, who will compete for the closer role. Texas’ pen also ranked tenth in baseball in opponent batting average with runners in scoring position.

One name I’m curious about is Jonathan Hernández. In early September, Hernández lost the closer job to Leclerc, and interim manager Tony Beasley stuck with José to end the season. I wonder if Bruce Bochy will make it a Spring competition between the two for the closer job or already have an idea. I remember Jonathan telling me in early August that he hadn’t reached maximum potential since he’d been throwing all last off-season. So now he has an opportunity to rest up for next year.

Texas has depth in its system when it comes to position players. Their middle of the infield isn’t going anywhere. Josh Jung picked up vital reps at third base in September, Nathaniel Lowe won a silver slugger, and the Rangers have three viable catchers. The outfield is probably the most considerable question mark, but I like the outfield combination of Leody Taveras, Bubba Thompson, and Adolis García. Add Eli White to the mix, and you have a lot of potential in the outfield core. Now, if there’s a missing piece, it’s a left-handed outfield bat. If the Rangers retain Brad Miller, that may fill the void, but I would say the Rangers may try to hunt down a more consistent left-handed bat in the outfield (unless they feel Taveras can fill that piece by being a switch-hitter).

The catcher will be intriguing to me throughout Spring Training. It’s similar to last season, with Mitch Garver likely getting the starting job. Now it’s Sam Huff and Jonah Heim likely battling for the backup role. Jonah got his first full-fledged season as a primary catcher, and Sam bounced from the major to the minor and vice versa (to get more reps). Unless Texas wants to utilize Sam as a catcher / designated hitter / first base backup, Texas will need to choose if they’re going to keep either Huff or Heim, send likely Sam to start in Triple-A, or add one to the trade block to sweeten a trade deal for a starting pitcher.