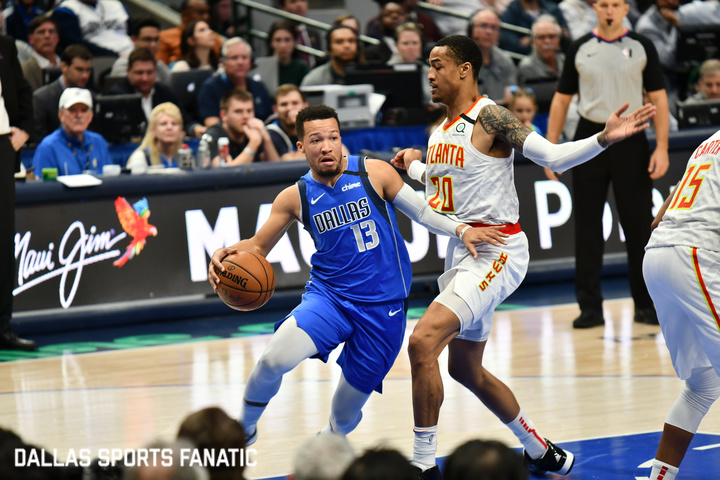 The Mavericks began their second stint of life without Luka Doncic this season with a disappointing loss in Houston on Friday night. There were some positives to come from that game, mainly Kristaps Porzingis erupting for a season high 35 points. With Dallas having a quick turnaround with the Hawks coming to Dallas on Saturday night, the team opted to rest Porzingis on the second night of the back-to-back.  So minus their two leading scorers, numerous Mavs were needing to pick up the scoring load.

After a 123-120 win over a horrible Hawks team on Saturday night, it’s safe to say the Mavs stepped up when needed.

Despite going down 15-5 within the first three and a half minutes of the game, Dallas was able to catch fire and defiantly never look back behind one of their best nights from beyond the arc this season. At one point early in the fourth quarter, the Mavericks were shooting 19-35 from deep (53%). They would finish at 20-39 (51.3%) with Seth Curry, Dorian Finney-Smith and Maxi Kleber accounting for 13 of those makes.

The Mavericks also lucked out by getting one of Trae Young’s worst games of the season with just 12 points on 4-13 shooting before having to leave the game early with an ankle injury.

No Luka or KP? No problem
Everyone’s always quick to praise the depth of this team and Saturday night was a textbook example of the validity of that praise. Down their two best players, the rest of the Mavericks were still able to come up with a relatively easy win over. No matter who’s on the other side, it’s never easy to get a win the NBA.

“We had a lot of good performances top to bottom,” coach Rick Carlisle said after the game. “It’s a terrific roster, very deep. A lot of versatility and flexibility. That was very important with Luka not playing and KP out.”

It always seems like all of the Mavericks are ready and able to slide in and out of different roles on any given night. Some nights Dorian Finney-Smith might not need to take more than two shots and just grab rebounds and play good defense.  Then on nights like tonight, the Mavericks were glad to let him take 10+ shots on the way to scoring 22 points.

Most game nights this season, Ryan Broekhoff has arrived at the arena knowing he was just going to sit on the sideline in street clothes. Saturday night he logged a season high 23 minutes and scored 8 points along with 6 rebounds.

Then someone like Jalen Brunson, sometimes lost in the guard fold, scored a team/season high 28 points in 27 minutes.

Jalen Brunson leads the way
After a tough night in Houston on Friday, second year player Jalen Brunson was able to recover and come up big for the Mavs against the Hawks. His coach was appreciative of the effort.

Brunson enjoyed the night in the spotlight, willingly sticking around to talk to media a bit longer than he certainly needed to. When I asked him about his role fluctuating from week-to-week and even game-to-game, he was honest and forthcoming.

“It’s definitely easier going through it with a year under your belt, but it’s honestly tough having a lot of pieces. We have a lot of good pieces on our team. I think, for the most part, we’re doing a really good job of playing off each other and feeding off each other. Everyone’s doing their job and sometimes their jobs are different things on other nights. We just have to stick to it and stick together.”

Brunson might know getting the short end of the minutes stick more than anyone besides J.J. Barea in the crowded Mavs backcourt rotation. While he had 27 minutes tonight, that is far from the norm. He has 34 games this season with 19 minutes or less compared to just 15 games with 20 minutes or more. It can be tough for him to find his footing and consistent play, but the two-time national champion at Villanova certainly has the maturity to handle it.

Thank you, Vinsanity
The Mavericks were fortunate enough to have NBA legend Vince Carter on their team for three seasons from 2011-2014. Just turning 43 last Sunday, Vince is still going for one more season in the NBA. With this being his last, the Mavericks offered him a video tribute during the first quarter on Saturday night.

“Vince is such a cherished guy here from his three years,” Rick Carlisle said after the game. “It’s really amazing beyond words if you know what it’s like to lace ’em up and play in the NBA. It’s a phenomenal accomplishment… It’s great to see.”

It was also a great touch that Carter’s former teammates Dirk Nowitzki and Shawn Marion were sitting courtside for his final visit to Dallas.

Half man, half amazing. It’s been great getting to watch Vince for 22 seasons. I was lucky enough to be at the AAC for the buzzer beater in the 2014 playoffs and it’s a moment I’ll never forget.