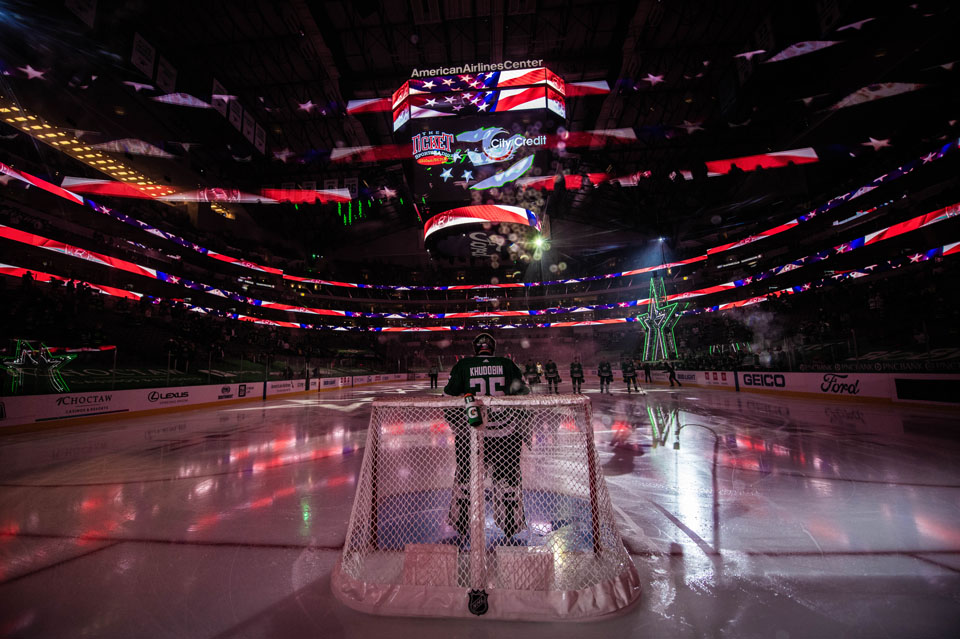 Head Coach Rick Bowness scratched Anton Khudobin coming into the game for, “internal reasons.”  This comes after Dobby has posted a 3-2-1 record and a .908 save percentage.

Bones was quoted saying, “I have very few rules, but you damn well better follow them…”  It looks as though the starting netminder was late for practice, and as cool of a cucumber as coach may be, there is no room for undisciplined actions by these grown men.

Alex Debrincat came in flying down the wing, took a shot on Jake Oettinger that bounced right back to him, and he swatted it out of the air into the net.  Albeit an extremely athletic play, it would not result in a good goal, but it lit a fire under him to continue his strong play.

Chicago had Dallas on their heels running around the ice, and Jason Dickinson ended up taking a minor penalty, just over six minutes into the game, while Chicago led in shots 7-1.  The Stars would kill the penalty.

Dallas came back and put some pressure on late in the period, and Carl Soderberg took a bad tripping penalty with only two seconds left on the clock.

Big Jamie Benn and Nikita Zadorov had a heavyweight tilt a few minutes into the second period.  It looked like Benn won the fight, with a couple really tough uppercuts, it definitely woke the building up.  Check out the fight below..

The next five minutes or so got really chippy, with Jamie Oleksiak and Esa Lindell both throwing monster hits in the defensive corner.  Chicago would kill the penalty.

Alex Debrincat would not be denied again, as the Blackhawks were on the powerplay from a Jason Dickinson penalty.  Patrick Kane worked the puck down low with a great no look pass that froze the defense, then it was quickly crossed from the corner, back door, to Debrincat who slapped it home.

The Stars kept chipping away.  Miro Heiskanen came in down the middle, and absolutely cranked a shot off of the elbow, from the slot.  Most people in the building thought the puck went in.

Dallas shot out of the gate and created a few chances, but Malcom Subban would stand firm.  Jamie Benn hit the outside of the post with just over eleven minutes to play, and the team continued cycling the puck down low.

It wasn’t until a little wrister from Miro Heiskanen ended up ripping off the newly accompanied Jason Robertson (via the taxi squad) and into the net.  It would be Robertson‘s first NHL goal.  Radek Faksa received the second assist on the play.  It was as if both Heiskanen and Debrincat were both be unaccepting of their pointless fates, after coming so close on their first chances of the game.

Dallas continued putting on heavy pressure, and the game continued becoming ever more physical.  Shots went back and forth, and with 5:40 remaining in the period, newcomer Jason Robertson, took his second penalty of the game…

Although the penalty would be killed, the Blackhawks maintained control for the majority of the third, as time dwindled down, sending the two teams into overtime. Shots were 32-29 in favor of Dallas.

Per usual with the typical 3v3 NHL style overtime, chances went back and forth, Jamie Benn had two really good looks on net that would not go in.

The usual suspects, Patty Kane and Alex Debrincat, finished the game.  Kaner rushed down the blocker side of Oettinger, and sauced an absolute beauty over the stick of the Stars’ defender, which Debrincat finished beautifully, chipping it right over Jake’s glove.

Dallas has their chance for revenge at 7:30, Tuesday evening, at the American Airlines Center, although they were still able to squeak away with a point.