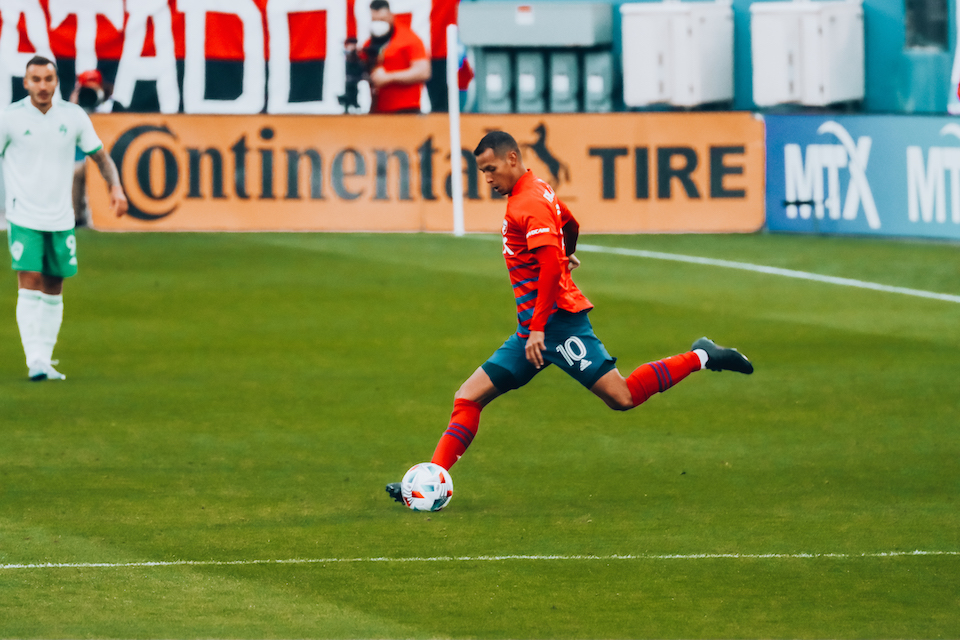 FC Dallas clinches first win of the season against Portland

FC Dallas clinches first win of the season against Portland

FRISCO, TX- FC Dallas (1-1-1) hosted their second home match of the season and came out with a 4-1 win over the Portland Timbers (1-0-2) at Toyota Stadium on Saturday night.

Tonight’s match featured the debut of the alternative jersey dubbed the “Community Kit.” Following their scoreless draw in their home opener match, FCD needed to make changes. Luchi featured a starting XI full of younger players giving them the task to become that needed change.

“This is a team that everyone needs to be ready,” Luchi said. “We knew that they could change the game, and we trusted them.”

Just two minutes into the game, Ryan Hollingshead worked his way down the left side to send a low cross into the box for Andres Ricaurte to tap it into the net. Nearly at the 15-minute mark, after a failed corner kick attempt from the visitors, FCD scored via Jader Obrian. Megiolaro sent a long ball towards Obrian, who just chipped it over the keeper to extend his side’s lead two-nil.

Playing some of the youngsters from the team helped Luchi give him the partial result he was needing. Luchi’s men came out in full force since the opening minutes, but as the match went along already two up in the score sheet, it seemed that their attempts died down as time went by to the halftime mark.

Right at the 45-minute mark, after a loose ball in the box, Bressan made it 3-0 for the home side. Following today’s goal, the Brazilian went up on the scoresheet for the second time in his three-year MLS career. “We needed to find the consistency,” Bressan said. “We did really good to take the three points.”

During the first 45 minutes, FC Dallas was very effective with shooting on target four times out of five attempts.

After a series of substitutes by the visiting team, Eryk Williamson from Timbers scored a goal to keep Portland in the fight. The Timbers attempted numerous times to capitalize on another goal, but were ultimately unsuccessful.

FCD also had attempted to extend their lead but could not follow-thru on their plays to finish them. This game also featured Edwin Cerillo, 20, and Dante Sealy, 18, who made the MLS 2021 season debuts.

Just minutes into coming in as a substitute, Sealy scored his first MLS goal after a low cross from Franco Jara to extend his side’s lead. The match ended in favor of the home side 4-1 against the Timbers. The game featured lots of good individual performances from the players, hoping to keep that momentum going for the upcoming games.

Can we indulge you in some highlights? pic.twitter.com/M99DehpQa7

FCD Defender Ryan Hollingshead gave some remarks on the team’s formation and tactics of where he needed to play. “I have to be ready to play at a high level, either right-back or left-back and be the best,” Hollingshead said. “Having that flexibility and knowing what to do is something that I’ve been working on 2021, and I pride myself on doing both sides and being the best at both.”

Dallas’ next home game features the Texas Derby against Houston Dynamo (1-1-1). The Texas Derby will feature former FCD players Maxi Urruti and Fabrice Picault. “It will be a different game against Houston, knowing what mistakes were made and how we can perfect them,” Bressan said. “In Brazil, we say that the derby games aren’t played they get won.”

This was a massive win for FC Dallas at home, and with Saturday’s win, it might just give them the momentum and confidence they need to face Houston Dynamo next Saturday, May 8.