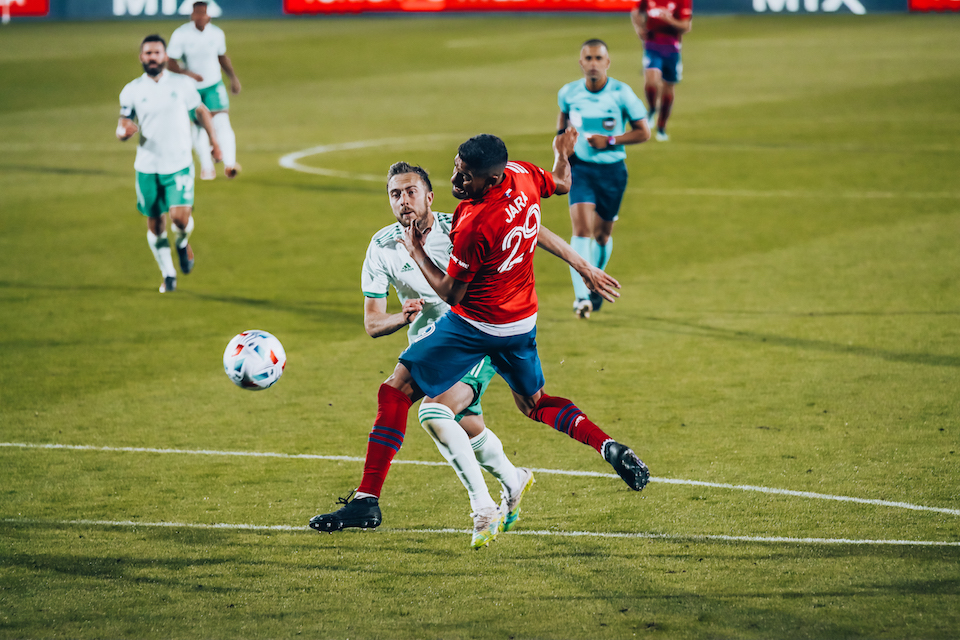 FC Dallas stumbles on a late draw against Salt Lake

FC Dallas stumbles on a late draw against Salt Lake

Luchi Gonzalez showcased his lineup slightly differently than in last week’s last-minute loss to Minnesota. He replaced injured Phelipe Megiolaro with Jimmy Maurer and brought on Freddy Vargas as a starter to accompany Franco Jara and Jader Obrian in the team’s attacking front.

FC Dallas has been unbeaten against Salt Lake at Toyota Stadium since 2013. FCD has won once and drawn four out of their past five encounters. This game promised to favor the home side despite their position in the aggregate standings.

Despite the slipping and sliding caused by the rain, FCD managed to be more threatening with its efforts. In the first couple of minutes, you could tell that none of the players were very comfortable with the field’s wet conditions.

Reaching the 20th minute-mark, Real Salt Lake managed to put one shot past Jimmy Maurer to open their lead after a left-footed shot from the left side of the box via Rubio Rubin.

After a series of attempts by FCD nearing the 30th minute, Salt Lake was lucky enough that none of their attempts found the back of the net. FCD managed to keep on pushing despite being behind on the scoreboard. Dallas accumulated a total of 18 shots, but only seven of those went on target.

FCD had a clear-cut chance in the last minutes of the first half but was denied by David Ochoa. Ochoa maintained his team’s lead accumulating a total of six saves, making him a strong contender for the man of the match.

After some sloppy defending from the visitors, as a result, Salt Lake conceded a penalty with three minutes left into the game. Argentine Franco Jara stepped up to take the shot. Jara converted the penalty kick making it his first goal of the season.

“I felt happy to score my first goal today,” Jara said. “It felt great to get that confidence and I want to keep going on a streak. I want to help the team pick ourselves up and give them confidence to keep on fighting. We will take it a game at a time.”

Absolutely needed it. Franco Jara converts on the PK to tie this one up. pic.twitter.com/KPGcIbNDfI

FCD again went on attacking mode finding their way past the Salt Lake defense. As a result, they had more chances to extend their lead and turn the fame around.

Luchi’s men were on the counterattack various times throughout the game, but Salt Lake held on to that short tie. Salt Lake lacked goal attempts, but the very few they had were dangerous up front. After numerous attempts, an FC Dallas had to come. As a result of those multiple times, Ryan Hollingshead managed to get his shot past Ochoa to extend the home side’s lead. Hollingshead’s goal on Saturday was his first this season and his 17th in MLS history.

Pax ➡️ Ryan ➡️ Back of the Net pic.twitter.com/11hSB3NuUO

Their happiness and lead didn’t last long, with Salt Lake equalizing because of the home side’s poor defending. Damir Kreilach equalized for the visiting team via a header in the box. As explained above, Salt Lake had few attempts, but they had created danger for FCD time after time.

“It’s just heartbreaking and it’s painful,” Luchi Gonzalez said, “This is a game we were wining with ten minutes left and we don’t find within each other the savvy, the game management, the street smarts to hold the result and to win the game.”

“Things aren’t bouncing our way but also we have to create our own luck and make sure that when we are in that final third we’re doing everything we can to put it in the back of the net,” Hollingshead said on the team’s performance. “We need to be better if we’re going to string some wins together.”

FC Dallas has only won once in the first six games of the season. A poor start for Luchi’s men this season. Despite not losing a home, FCD cannot find its winning ways. FCD has accumulated only six points out of a possible 18. Results need to come quickly for Luchi and his players to turn this lousy start around. After Saturday’s draw, FC Dallas now sits at the bottom of the Western Conference.

After Saturday’s draw at home, FCD now goes on the road to face the Colorado Rapids next Saturday, May 29th. Following their game on the road, they will return to Toyota Stadium on June 19th when they host Minnesota United.